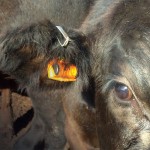 last year, i wrote about an interesting project that aimed to develop a kind of fitbit for cows. the study from the university of calgary, fitted cows with accelerometers to detect activity levels, and therefore the health of the cattle. the hope is that this will provide an early warning for diseases.

it’s clearly an idea with merit, because a 2nd team, this time from cornell, are undergoing a similar study . they’ve developed a device that contains a two-inch tag that allows farmers and scientists to continuously monitor the movements and ruminations of livestock.

“when the animal is affected by a health disorder, that rhythm and physiology is altered, and they move less,” the authors say. “to monitor these behaviors, you would have to have a person checking the cows at least once a day. technology has provided a means to do that automatically.”

data from these devices is transmitted via wi-fi to a computer, whereby it’s analyzed by algorithms that allow each animal to be rated out of 100.  if the animal drops below a score of 86, the farmer is notified and informed of the potential health issues the cow faces, whether it’s digestive disorders, mastitis or metritis.

“it doesn’t eliminate the need for a physical exam, but what it does eliminate is the need to look at every single cow. you can just focus on the cow that needs attention, where there is an indication of a problem,” the team says.

what initially came across as something of a gimmick is now increasingly used by dairy farmers around the world.  the tools have given them fresh insights to help improve the health and well-being of their cattle, and indeed the efficient operations of their farms.  as such, it’s a trend that is only likely to continue.