Four years ago, I joined a Tier 1 Investment Bank in London as a Data Warehouse Architect and tuning expert, and immediately faced one of the biggest challenges of my career.

The mission critical multi-terabyte Oracle warehouse system I was responsible for, was struggling to meet the query processing demands, and continually failed to meet the SLA for both micro-batch data loading, and end user query performance. This became one of the most challenging periods of my career.

In this article, I’ll describe the main difficulties I faced, the traditional database solutions available at the time, and an innovative new architecture for a large scale data warehouses running in the cloud.

Reflecting upon my experience, I found myself dealing with (often conflicting) requirements which included:

"You cannot put CPU in the bank and save it for later. So, if you are running with idle cycles you should be looking for more ways to use it."    — Tom Kyte (Oracle)

To make matters worse most systems have several competing groups:

The chart below illustrates a typical ETL/ELT load profile with repeating batch processes which run the machine at nearly 100% capacity. These tasks typically maximize throughput — to complete as much work as possible in the shortest possible timescale. 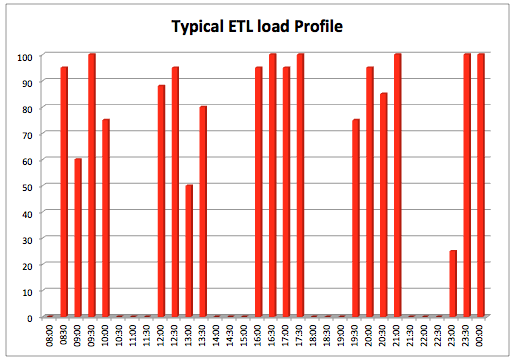 This compares markedly to the typical Business Intelligence query profile illustrated below which is much more erratic, and typically needs to maximise individual query performance to deliver insights as quickly as possible. 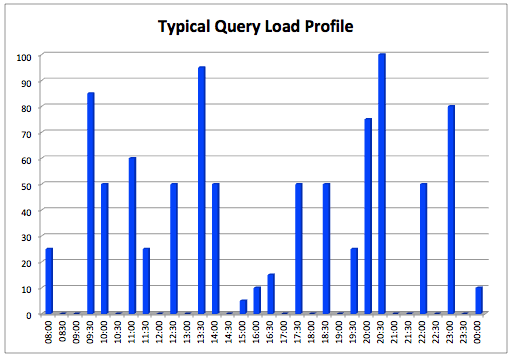 The most common approach to manage these competing demands involves creating a Workload Management Queue whereby each user group is allocated 50% of machine resources. This places queries in two separate queues, with each limited to a fixed number of concurrent queries or tasks executed in parallel. If there are insufficient resources available, the queries are queued, and when the machine is heavily loaded, they can even be timed out. 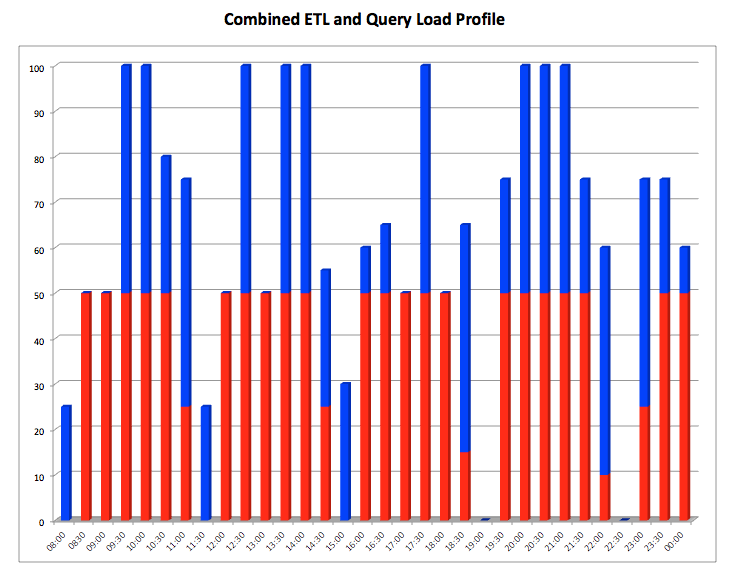 While fine in theory, the difficulties with this solution quickly become apparent.

In conclusion, although it appears to be fair in principle, neither group is fully satisfied, and there’s an on-going tug-of-war for increasingly scarce machine resources. In effect, we have the worst of both worlds.

When running on a shared memory architecture, the only realistic option is to scale upthe hardware.

The diagram below illustrates this architecture, and the solution involves adding CPUs or memory or migrating to a bigger machine. Like the database and application tuning option described above, this can take months to complete. A typical data warehouse system can have a huge number of incoming and outgoing data feeds, many undocumented, and the preparation, testing and migration process can take considerable time. 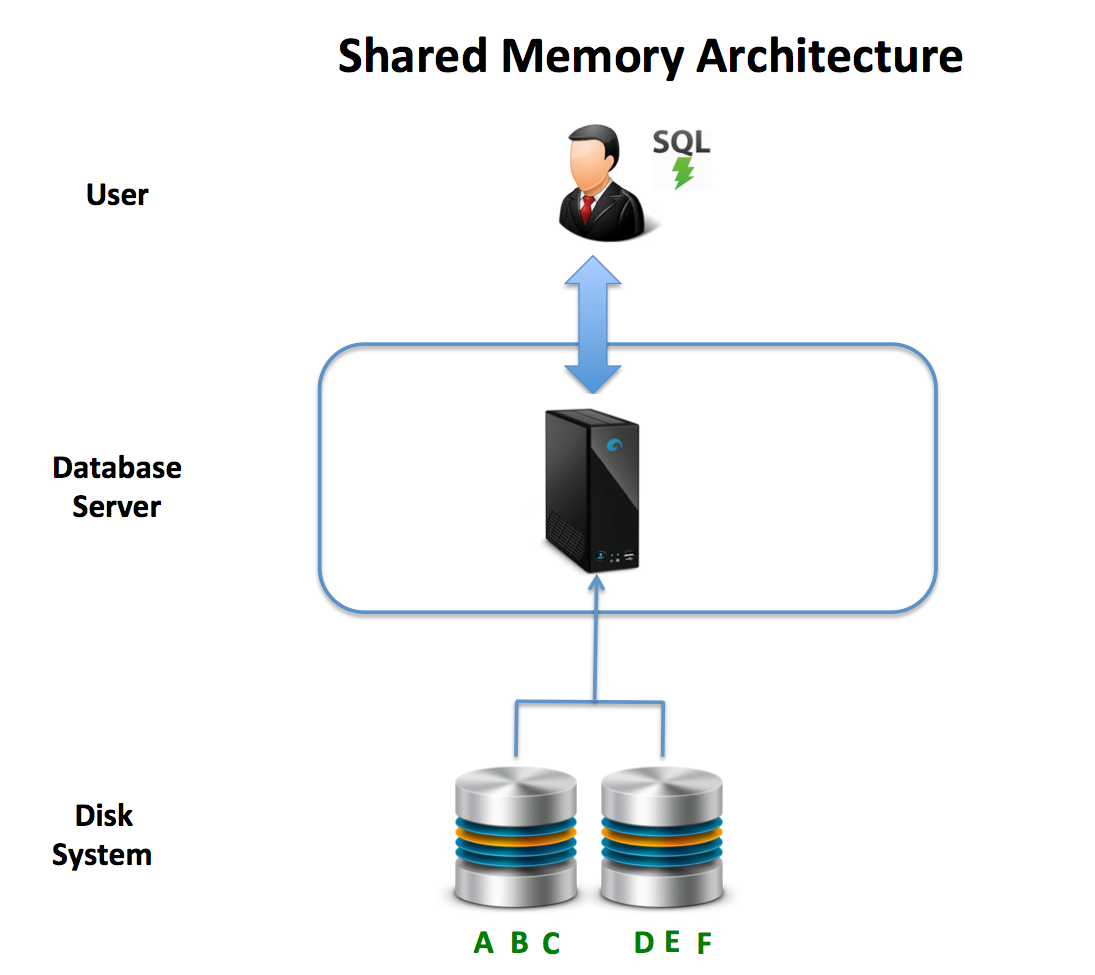 Including the time to agree on the necessary budget and assemble the team, it took almost a year to migrate a large and complex Oracle data warehouse to a new Exadata platform.

To make matters worse, like building additional lanes on motorways, the workload typically increases to make use of the additional capacity, and a few years down the line the system will need upgrading yet again.

Clearly, this is not a sustainable long term strategy.

The diagram below illustrates the massively parallel processing (MPP) architecture used by many databases and warehouse appliances including Vertica, Teradata and Greenplum. In this solution, it is possible to add additional nodes to an existing cluster which adds both compute and storage resources. 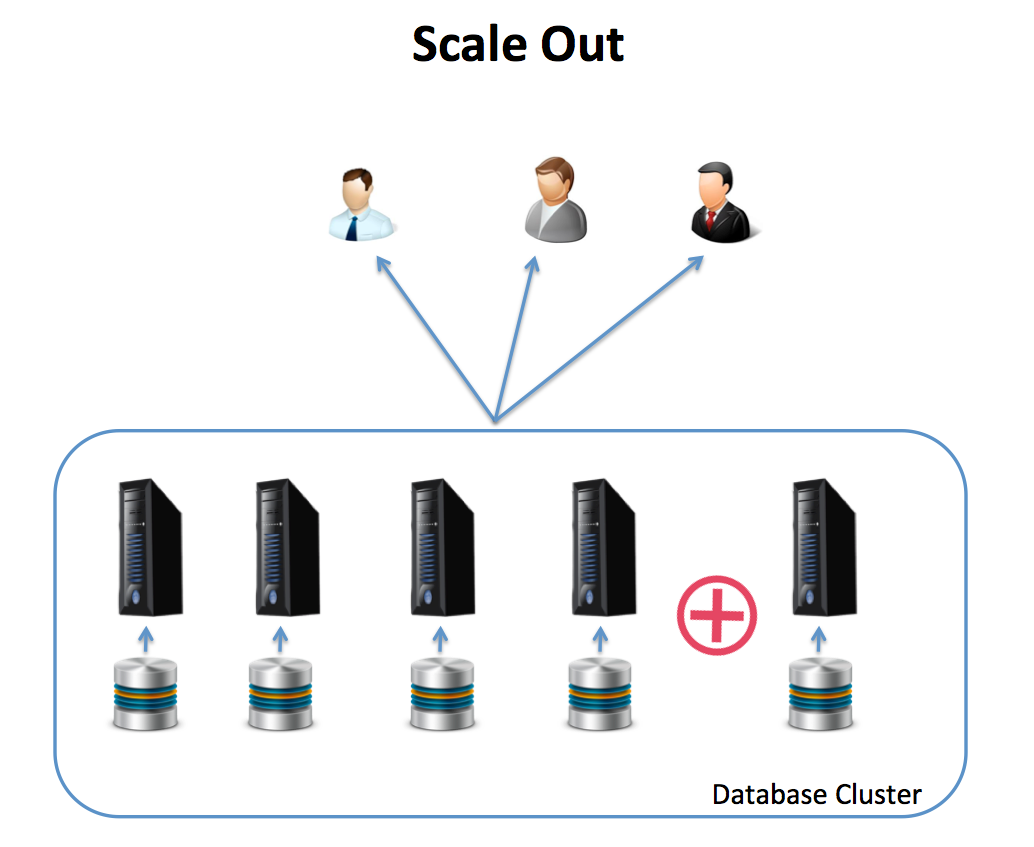 While this can be an easier compared to the scale-up approach described above it does have the following drawbacks:

An ideal warehouse database architecture might consist of multiple independent clusters of machines each running different workloads, and each individually sized to the particular demands of the task in hand. It would be possible to scale up (or down) within seconds, but still quickly extend the data storage independent of compute resources.

Effectively, this would deliver the best of both worlds. The ability to scale up or down on demand (the Scale Out architecture), while also retaining the ability to add nodes to an existing cluster to support additional concurrent users, while avoiding any down-time or resource intensive processing resulting from the need to reorganise the database.

The diagram below illustrates the logical architecture of Snowflake, the cloud based data warehouse platform: 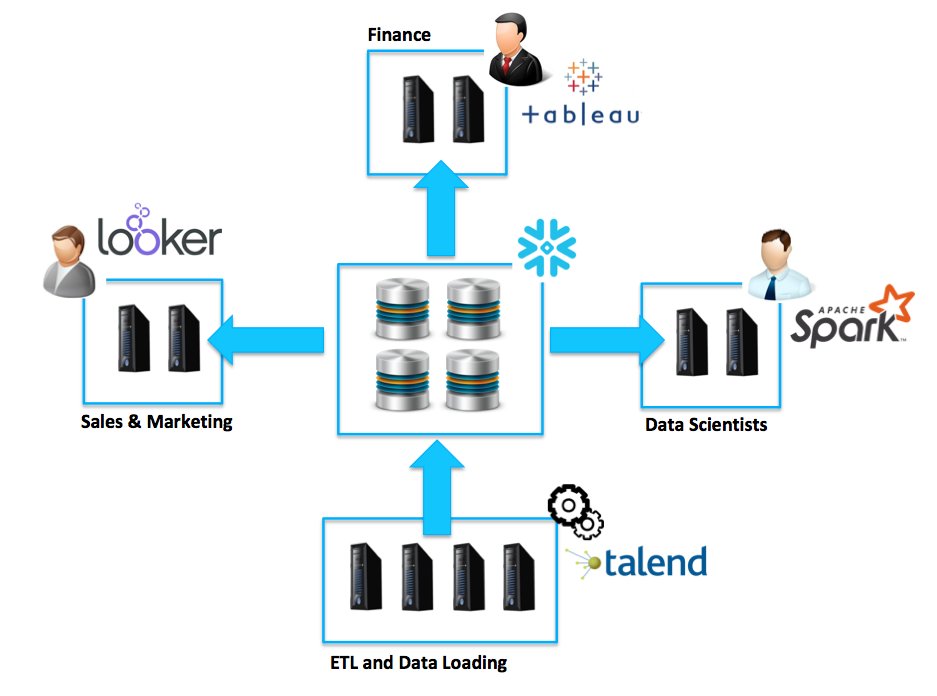 The Snowflake Elastic Data Warehouse deploys multiple independent clusters of compute resources over a shared data pool. Users are allocated a Virtual Warehouse(a cluster of compute resources), on which to run ETL/ELT load processes or queries. However, unlike the traditional solutions, each virtual warehouse runs completely independently, avoiding the tug of war for machine resources found on almost every other database solution. 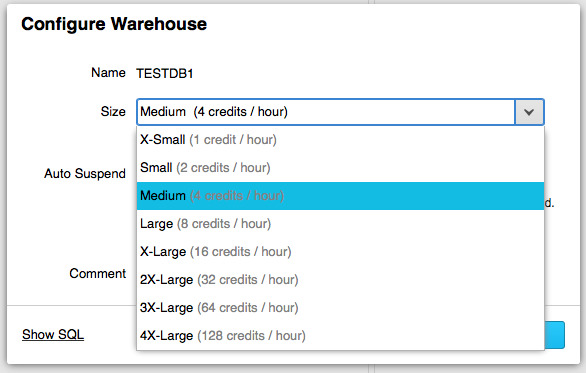 The screen shot above illustrates just how easy it is to adjust the size of a Snowflake cluster. Using T-shirt sizing, the operator can choose to resize the cluster from the current Medium size of 4 nodes to a maximum of 128, and this is normally available within seconds.

The charts below illustrate the batch ETL/ELT and business intelligence query profile on the Snowflake platform. Unlike the traditional approach, the user groups can be deployed on entirely independent clusters, each sized as appropriate. This is simply not possible on most database platforms including the cloud based managed solutions provided by AWS Redshift and Oracle or IBM.

The benefits of this solution include:

As little as five years ago, the only options available to scale a data warehouse platform were by application tuning or migrating to a bigger machine. If you were lucky enough to be running Teradata, Vertica or Greenplum, you might consider extending the existing cluster, but the short term options were limited, and it might take weeks to respond to a change in demand.

Snowflake has changed the data warehouse landscape by delivering an innovative multi-cluster shared data architecture which delivers the flexibility to spin up, suspend or resize the cluster to exactly match load requirements.

In addition, because storage and compute a deployed separately, it is possible to independently scale either as storage, or processing as requirements change.

Best of all, you only pay for the compute resources you need, and these are charged on a per-second basis which makes this both a compelling and potentially cost effective solution.