This notion of autonomy carries over into the way microservices are created and maintained. A microservice is a standalone product with a distinct team. The team is usually made up of a product manager, project manager, one or more developers, test personnel and release engineers. Sometimes these roles are shared. What's important to understand is that one team is entirely responsible for all aspects of microservice development and maintenance. This high degree of autonomy about technology and personnel increases the speed and efficiency of work done via microservice from within the software development lifecycle (SDLC).

Microservices in a Nutshell

Microservices Are Represented by APIs

Unlike traditional applications in which UI, business logic, and data access are tightly integrated as layers within a single application, microservices are intended to stand alone, used by a variety of devices and applications — from a cell phone to web browser, to a device on the Internet of Things (IoT). Access to the given microservice, whether initiated by the device or other microservice, is conducted through APIs.

Microservices Benefit From the Shift Left Approach to Testing

A key tenet of DevOps is to engage in continuous testing, as early as possible, using as much automation as possible. The approach to testing as close to the beginning of the SDLC is the basis of the Shift Left movement. This applies to test both the high-level API access point of the given microservice as well as lower level API used components.

Component testing is similar in approach to API testing, but specific methods are often required to ensure full test coverage of all components and application layers. Testing a single component, then testing integrated groups of elements together provides that these components can still function properly when you get to more complex test and load scenarios later in the SDLC. Then, you can transition with confidence to doing more traditional system-wide performance testing in a pre-production environment.

Whereas traditional applications can be load tested via the application's graphical user interface (GUI), load testing a microservice is about exercising its API directly via code. Sometimes the API will support a protocol other than HTTP. Thus, to test as soon as possible taking a "shift left" approach, load testing tools must be able to generate traffic with specific protocols such as RMTP, MQTT, and AMQP. Also, the tool needs to integrate easily into a company's automated test processes.

In the world of modern DevOps, API and lower level component test achievement result from using a Continuous Integration (CI) and Continuous Delivery (CD) approach. Modern CI/CD is enabled via automation. Given the ever-accelerating speed of software development fostered by DevOps, test automation is not a nice to have, it's essential. Human testing cannot provide the consistency and reliability required to ensure code quality at web scale. Companies that implement effective automation processes quickly will maintain a distinct competitive advantage over those lacking an automated testing facility. Better automation practices translate into faster release cycles. A company with the ability to release and test a feature in a week - from programming to deployment - will outpace those who get mired down by the release process itself and thus take months to complete the same tasks.

Choosing the right tool is a key decision when it comes to implementing a test automation process that is fast and effective. NeoLoad, the enterprise-scale performance testing platform from Neotys is designed from the ground up to be a comprehensive solution facilitating automated load testing. NeoLoad allows both developers and QA personnel to create automated tests that integrate easily into the overall CI/CD process. 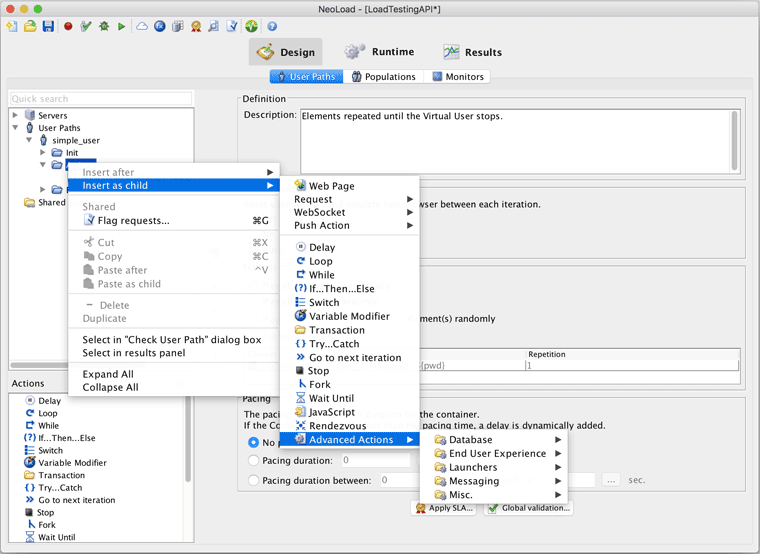 NeoLoad supports testing under a variety of protocols and sources, from simple HTTP calls against an API to more complex calls against databases and message queues. Load testing can be configured for a few or thousands of virtual users. The reporting is robust and customizable.

NeoLoad is the type of tool that provides the power and flexibility needed to give companies the competitive edge required to be profitable when doing business in today's digital world.

To achieve both speed and quality for performance testing microservices in a DevOps environment businesses will need to give testers and developers the autonomy necessary to take ownership of microservice SDLC. Once empowered, all members of the microservice development team — programmers and QA personnel to release engineers — will need to collaborate such that microservice automation happens wherever possible.

Beating the competition will depend on developers, testers, and release engineers working together seamlessly in a CI/CD environment to create software at increasingly faster rates. Choosing the right load testing tool, one with a proven history of success, is critical. Just as important as the tool, the ongoing commitment of all development team members to make microservices deliver on the customer experience expectation every time.

Published at DZone with permission of Nabeha Fedali. See the original article here.