How It All Began

The automotive industry has known exponential growth ever since its beginnings in the late 19th century. While in 1895 there were only four cars officially registered in the US, nine years later, in 1904, there were 121 US firms assembling and producing around 22,000 automobiles — and that was just the start. Only a few years later, in 1908, Ford's Model T was the first automobile to be mass-produced on moving assembly lines with all parts completely interchangeable.

The advent of robotic process automation (RPA) was a key milestone for the development of the automotive industry. Automation refers to the use of machines to perform tasks that had previously been undertaken by humans, which reduces the error rate and enhances the management of repeatable tasks.

The first industrial robot, the Unimate, was designed in 1954 by George Devol. It was the business acumen of Joseph Engelberg that took Devol’s invention from the drawing board to the assembly line. In 1959, the Unimate #001 prototype was installed at the General Motors diecasting plant in Trenton, New Jersey, followed in 1961 by the Unimate 1900 series, which was the first mass-produced robotic arm. Unimate, one of the most significant contributions to civilization of the past century, has ushered in a new industrial and societal revolution, the effects of which shape our world today.

Rapid advancement was to follow. Marvin Minsky created the Tentacle Arm in 1968; the arm was computer-controlled and its 12 joints were powered by hydraulics. David Silver designed The Silver Arm in 1974, which was capable of fine movements replicating the precision of human hands, with feedback being provided by touch and pressure sensors and analyzed by a computer.

SCARA (Selective Compliance Assembly Robot Arm) was created in 1978 as a four-axis robotic arm used for picking up parts and placing them in another location. SCARA was introduced to assembly lines in 1981. More recently, the new millennium is noted for bringing the large-scale use of a central computer in automation.

According to Ravnit Kohli of Synechron, “Robotics is a surging, multi-billion-dollar market because it provides businesses incredible savings and efficiencies [with] robotic process automation for consumer and business applications, which are expected to become an $8.7 billion market by 2024.”

In 2016, Genfour surveyed 500 business leaders from the UK and US, primarily in intermediate or higher managerial positions. Its findings went against the negative depiction of automation in the media in recent years, with nearly all respondents expressing openness towards a robotic future.

About one-third of respondents saw the adoption of automation as being just around the corner, with imminent plans to automate parts of their business. The extent of the expected introduction of automation varied from sector to sector. 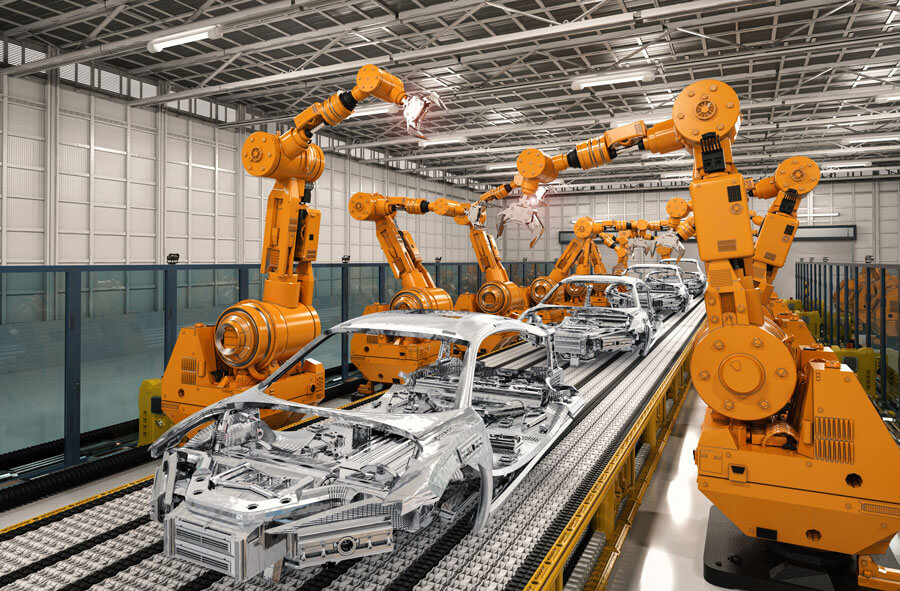 Robotic process automation allows manufacturers streamline back-office operations and cut the complexities of managerial processes, thus creating an agiler back office. This is possible due to a host of reasons.

Because no process-related data is stored from the software, thus keeping the information secure throughout automation. For a large North American automotive company, with a global customer and supplier base, complying with regulations in a multitude of countries can add 11% to their expenses each year, according to The Manufacturing Institute.

Software robots enable real-time reporting allowing manufacturers to determine optimal inventory levels and to calibrate current operations based on patterns of customer demand. They are a non-invasive tool for data extraction that provides wider and deeper analytics, with specific data for each executed process.

RPA Has the Ability to Bridge Digital Platforms With Paper

Software robots interact with the presentation layer by imitating a human user. Because the software is process and application-agnostic, it can be seamlessly implemented in addition to existing programs, such as web, desktop, CRM, ERP, Helpdesk, and Citrix applications. With the use of additional technology, manufacturers can also digitize their paper files and integrate physical data into their existing digital operations.

RPA Enables the Digitization of Communication

Software robots are able to provide manufacturers with language detection, named entity recognition, and sentiment analysis capabilities that are invaluable and necessary features in automating communications. They can also be applied to email and chat-based communication to help manufacturers respond to customer and supplier requests.

Overall, the effect of robotic process automation on the automotive industry is the complete elimination of manual errors and rework time, something that manufacturers have dreamt about since the dawn of the first industrial revolution.

As with all technology, in time, the expenses associated with implementing and maintaining RPA have sharply diminished. Coupled with the increased efficacy and enhanced manufacturing capabilities that it brings, RPA has presented itself as an option for large and small businesses alike.

A Peek Into the Future

In an interview back in 2001, Kevin Prouty, research director of automotive strategy for AMR Research in Boston, articulated the question that was on everyone’s mind: “The prospect of artificial intelligence is an attractive one. Eventually, it could eliminate quite a number of the inefficiencies in the [automotive] industry, from planning and design to sales and maintenance. People say it will revolutionize things, and it certainly has the capacity to do that. The question on everyone’s mind is, when?”

Now that the future is here, the answer is obvious. All manners of robots are increasingly used to support repetitive tasks in everything from front-office work to car manufacturers to the hospitality industry.

What we are witnessing today is not much different from what happened when the first industrial robots were introduced in the second half of the last century. The consensus seems to be that robotic process automation “has moved to proven technology and is providing tangible benefits to the companies that deploy it,” as Leigh Pullen, Executive Director at CiGen puts it.