We have a somewhat working SOAP service now.  Let's continue from where we left off in part 3.

You can get the code used in this article from the bottom of the previous article.

We have been using Eclipse, Tomcat 8, and MySQL — as mentioned, all the information is available in previous articles of the series.

In our make-believe story, your department boss approached you, remarked that other departments have liked your initial command-line app (that wraps the Shape Calculator), as well as the first release of the web application for the same. But still, others need to use it via a web service so they can incorporate it into their in-house business processes.

For now, they just want something — this is not customer-facing — it's really not much more than a pilot or proof-of-concept.

Between the other department and yours, some requirements were pinned down.

We have been fleshing out one of the operations as an example: queueCalculationRequest(), and we left off last at tackling sending back a response.

Here is the latest version of the operation:

So we need to turn that null into a SuccessOrErrorResponse.

In tackling this response, it touches on how will we handle errors. Based on the agreed-upon requirements (#3), we are going to convert everything into some return code. (Not necessarily numeric).

We went round and round about how to handle exceptions (use try-catch vs. using AOP), but these are simple methods, and there are only a few.

Yes, we didn't like how much mixing of business logic and exception handling there would be (except that business handling boils down to about one line of code per operation — the rest IS exception handling).  And yes, there will be some code redundancy.

Of note as well is that if we do a top-down, wsdl-to-code approach (upcoming articles), the Apache CXF cxf-codegen-plugin running wsdltojava does use try-catch blocks when it generates the service implementation.

In any case, we can always come back and refactor if it is warranted.

We want to be informative, but not too informative. And we want it to be simple and clear.

Working top-down as always, we enhance our queueCalculationRequest() operation to return something meaningful and to handle errors:

Those additions necessitated enhancing the SuccessOrErrorResponse class and creating an Enum.

For the Response class, we added three constructors:

I am not going to show every test result, but let's run through a few.

We may decide that the above is giving away too much information, as the errMsg can include a long string of nested exceptions.

It is possible we were (lazy, rushed, conservative, pick your adjective) before, when we were developing our core project, the Shape Calculator. When passes a bad ShapeName, or a bad CalcType, it knows the distinction and says so in the exception. However, the exception itself is just a generic IllegalArgumentException. Perhaps we should have created distinct exceptions.

I bring that up because I added "BADSHAPE", "BADCALC", and "BADDIM" to the RespCode enum.

OR we can just replace those with BADVAL.

In our story, the Shape Calculator component is already being used by some people and departments, both via the command-line and via a web application...  so... changing/upgrading the base project isn't a choice done in a vacuum. Do we make the change anyway and not worry about it?

I chose to delay the choice until necessary. So, we'll leave things as they are, even if less than optimal. That means we are just going to use SUCCESS or ERROR (for now).

Implement Get All Pending Requests

Let's cover one more interesting method, since this one returns a List<CalculationRequest>.

I did a copy-paste of our previously implemented method, and made the appropriate changes:

As we begin to dive into this new method, we arrive at having to decide what to do with PendingRequestsResponse. Because the more-generic SuccessOrErrorResponse cannot return any data, such as the List that we need.

My first thought is that we also still need to report back a Success or Error, in addition to any data.

Sooo... do we sub-class from SuccessOrErrorResponse, or do we just make it a member of our new class.

I chose to sub-class. Here's what we now have for PendingRequestsResponse:

I like to help myself out as much as possible because I easily forget what code does what, when, where, and how. I try to program so it will warn me when something is wrong (because I did something wrong). It's the same idea as having a method, like say in a JUnit test, that throws some exception saying "Unimplemented Test."

So I wanted to make both the SuccessOrErrorResponse and the PendingRequestsResponse somewhat "smart" in that regards, to try to guide the programmer. More specifically, with which constructor to choose. I didn't really bother adding any smarts to the setters.

At the same time, I didn't want the creation of these response classes to fail, so I didn't use exceptions to inform the programmer.

It was easier, of course, to be smarter with the PendingRequestsResponse because the very name of the class is its sole purpose. Thus, a constructor accepting a List<>, seems to say "Hey, use me when you were successful and have a list." Likewise, the constructor accepting only an exception. 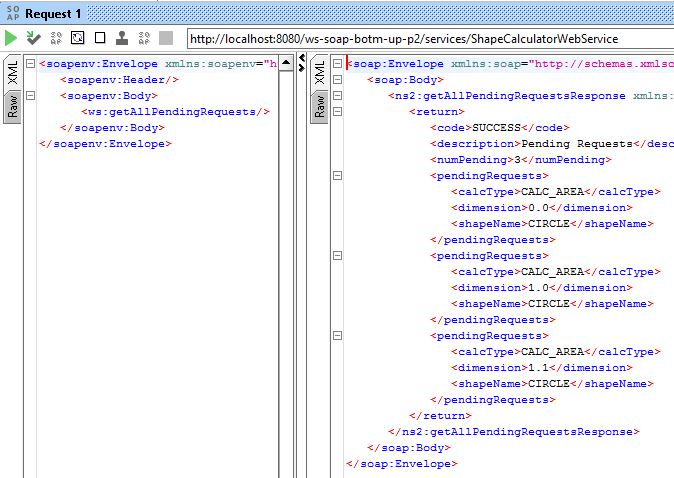 What remains to be done is to fully implement the remaining operations in a similar manner and test them. (We won't go into that, but the latest code will have the changes).

When our server shuts down at the moment, there are errors at the end of the log. We need to add what we added to our previous web application. You can check that out in "Correcting A Server Shutdown Process" (part 1 and 2).

You can get the latest for this web service project here.

And for the underlying Shape Calculator project here.

At first, I thought I would re-do this SOAP web-service, and change the POM's WSDL-generation plugin to "true" for generating the wrapper: <genWrapperbean>true</genWrapperbean>.

Frankly, it's uninteresting. (Ahem.)  In our story: Your boss said no; he can't justify you spending more time. The service works, you have other things on your plate.

It is much more interesting to re-do the service using a WSDL-first, top-down approach.

And we need to re-do the web application so it uses these web services. Later, securing the web services, and more. So, stay tuned!

Use MTOM to Efficiently Transmit Binary Content in SOAP