Back in March 2018, the pleasing news that the family of Symfony components was replenished with a useful Messenger tool spread quickly among developers. According to the creators, this Symfony tool had to take on the task of sending/receiving messages to/from other applications, as well as queue management.

Naturally, the appearance of an interesting tool causes a desire to implement it quickly in projects. However, few people can afford it. Therefore, we did not risk our time, as well as the stability of our customers’ applications, and postponed looking into it.

And now, 2021 has arrived, and every time I look through the Changelog of the new Symfony releases, I run into the Messenger edits. It’s obvious that the work has been in full swing for almost two years, as the component seems to be more stable, which means it’s time to take a closer look at it.

I don’t like to copy examples from documentation, so I decided to focus on conceptual things myself, and to study the structure of the Messenger, its basic abstractions, and the tasks assigned to them.

The Difficulty of Perception

I’ll start with a small lyrical digression and touch on the topic of the complexity of information perception.

The complexity of studying a new topic to a great extent depends on how the author presents the material (by the term 'material' I mean: documentation, articles, screencast, etc.). You've have probably heard of, or possibly met, people who are real professionals in their field, but who are absolutely incapable of expressing themselves in a simple way, and sometimes their attempts to do this only make the situation worse.

Knowledge transfer is not a completely formalized process, that is, there is no special approach in which every student will understand the material quickly and correctly. Therefore, everyone does it the way they can.

I decided to write about it because the first thing I came across when I started to study Messenger was the block diagram presented below. Despite the fact that such schemes should make the ideas they're presenting easier to understand, it had the opposite effect on me. 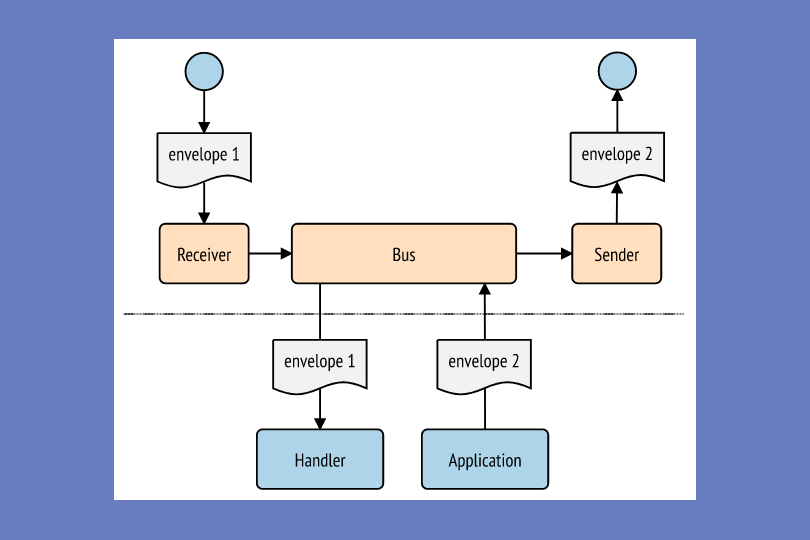 For you not to spend much time, I would like to make some recommendations on reading this scheme:

You can make sure you understand by studying the structure of the Message component a little. 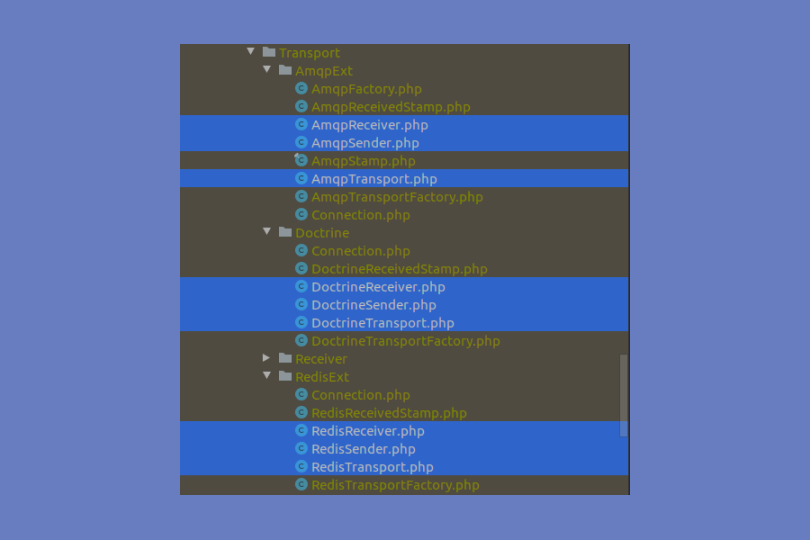 Thus, under the phrase “the Bus uses a Transport,” it is assumed that the Sender of the specified Transport will be activated for your message. A similar conclusion applies to the Receiver; the circles on the diagram mark, specifically, the third-party systems such as RabbitMQ, Doctrine, Redis, etc.

I would be glad if these notes help you to gain insight into the scheme quickly. I succeeded only after I had studied the codebase and examples from the documentation.

It’s a basic abstraction, the tasks of which include control over the process of sending a message and its transfer to the handler. Despite the fact that the tasks assigned to the Bus are the key ones, it is a fairly simple class with one dispatch method. The thing is that Bus does it in a very elegant way.

As you can see from the code, the Bus performs only two key functions: it wraps the message into the Envelope (more details about this abstraction later) and passes the message iteratively through Middleware.

Middleware are the very building blocks that implement Messenger’s basic logic. It is worth knowing that Middleware are fulfilled according to the order in which they are registered in the container.

The list available can be obtained by running the following command:

At the time of writing the article, I get:

An object, as an option for transmitting a message, is chosen for a reason: it is a great way to transfer context to the other parts of the system.

What does context mean in this case? This is the set of data that is needed to process a message. For example, we need to send a greeting after a new user is registered. We can create a UserRegisteredMessage message class and store the UUID in it as a context. The Handler will find this UUID of the user in the database and send an email to their given email address.

It is easy to understand when you can see the Event Dispatcher. What are the reasons for the appearance of the Envelope and Stamp abstractions then?

I have already mentioned that Bus passes a message through the intermediate logic, the so-called Middleware. We can manage our message within each Middleware.

Now the question arises, if I want Middleware 1 to do nothing with the message, and some logic to be fulfilled in Middleware 2, how can I notify Middleware 2 about it? (see the diagram below).

One option is to check the instance of the transmitted message in Middleware 2.

This is a good solution, but then Middleware 2 will be tightly associated with a specific message. I do not deny that such cases can also occur, but what if we are dealing with a universal Middleware that must process different messages?

Here we come to the idea of metadata, that is, some kind of auxiliary data set that should be sent along with the message. Stamps contain metadata as a marker that carries its own context.

And this is the root reason we use Stamps. As for Envelopes, you need to answer the following question: how correct is it to transfer metadata along with the message context? That is, to save Stamps directly in the message object?

This leads to the second idea: contexts need to be transferred as separate objects, and, to control them, you need an auxiliary abstraction, a certain control object. This function was assigned just to Envelope. It acts as a wrapper for our post and adds the ability to bind Stamps to a message.

Let’s consolidate our understanding of the concept with a simple example. Suppose you want to validate a message before sending it to a handler. This problem can be solved with the help of ValidationMiddleware available out-of-the-box. Pay attention to the 39th line, the validator will work if the ValidationStamp was attached to Envelope

To do this, during dispatch, we will pass a ValidationStamp object with the name of the validation group. And then, in case of an error, a ValidationFailedException will be dropped, which can be handled by the caller.

For a better understanding of what the Transport is, it’s better to think of it as of some kind of repository with which to work, for which two more abstractions are needed: the Sender, which implements sending a message to the repository, and the Receiver, which takes this message from the repository and sends it to the handler.

Out of the box, we have three asynchronous Transports, AmqpExt, RedisExt, and Doctrine, as well as two synchronous ones, In Memory and Sync. Moreover, the implementation of the Receiver is not required for Sync, since the Messages are immediately sent to Handler. In general, it does the same thing as EventDispatcher.

Of course, you have the opportunity to create your own custom Transport. For this, the two TransportFactory and TransportInterface interfaces must be implemented. 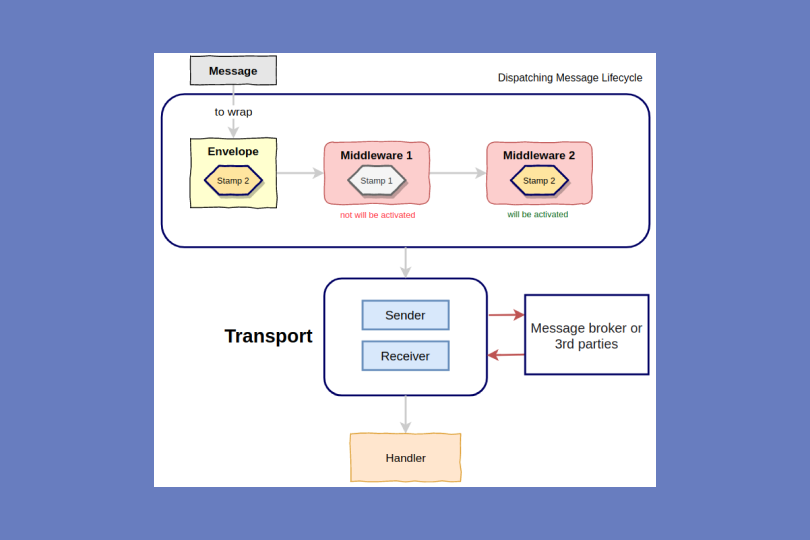 Transports themselves could take up an entire article, because there are a lot of questions, ranging from configuration and queue management to the worker and deployment operating. But since the purpose of this article is to describe the basic abstractions and their tasks, I will stick to a brief review of this topic.

The conclusion is clear: Messenger is a useful Symfony development tool and we will definitely use it in our company’s future projects.

In fact, we get an improved EventDispatcher with routing Middleware, the ability to control the message through Stamps, and also to use various Transports, including asynchronous transports.

Drawing such conclusions, I have, in fact, put Messenger on a par with EventDispatcher, but I want to emphasize that I am aware of the differences in the approaches these two components use.

EventDispatcher dispatches and Listeners/Subscribers process. At the same time, the Messenger both sends and controls processing. So we can summarize that Messenger can do everything that EventDispatcher does and even more. But, as for the EventDispatcher, it’s wrong to say the same, since it is limited compared to the first tool.

You have the right to decide for yourself what to use, but I prefer Messenger as a more flexible alternative.

Now let’s see some statistics. At the time of writing this article, packagist.org stated that Messenger has 1.8 million installations and almost 500 stars.

As you can see, the community is actively interested and works to improve the stability of the component, as well as to add new features.

And, finally, in the process of studying the materials available on the Internet, I came across a rather interesting article on the topic. I am not familiar with the author, but I am very impressed with the way the information was presented, so I recommend you read it: https://vria.eu/delve_into_the_heart_of_the_symfony_messenger/

Thank you for reading to the end. Good luck!

Published at DZone with permission of Oleksandra Liubytska. See the original article here.