This is the sixth and final blog post in a series examining technologies such as MongoDB and REST APIs that are driving the development of modern web and mobile applications.

Subsequent posts focused on working through the end to end steps of building a real (albeit simple) application – MongoPop.

Part 2: Using MongoDB With Node.js created an environment where we could work with a MongoDB database from Node.js; it also created a simplified interface to the MongoDB Node.js Driver.

Part 3: Building a REST API with Express.js built on Part 2 by using Express.js to add a REST API which is used by the clients that we implement in the final 3 posts.

Part 4a: Building a Client UI Using Angular 2 (formerly AngularJS) and TypeScript and Part 4b completed the MEAN stack by adding an Angular 2 client.

Part 5: Using ReactJS, ES6, and JSX to Build a UI (the rise of MERN) does the same but replaces Angular with ReactJS to complete the MERN stack.

Once your application back-end exposes a REST API, there are limitless ways that you or other developers can access it:

This post takes a look at some of these approaches. Unlike some of the earlier posts, this one aims to go wide rather than deep – touching on many technologies rather than diving too deeply into any one.

Everything that follows assumes that you have the Mongopop REST API running – if not, skip back to Part 3: Building a REST API with Express.js. Additionally, that API has been extended with 3 new routes (already included in the latest GitHub repository):

These route paths are implemented in the pop.js module in the Mongopop repository:

/pop/lastCheckIn depends on a new method that has been added to javascripts/db.js:

The configuration file config.js is also extended – note that you should replace the value associated with the makerMongoDBURI field if you're not running MongoDB on your local machine, e.g. with the URI provided by MongoDB Atlas:

The implementation of these methods follows the same pattern as already seen – refer back to Part 3 for details – and so is not explained here.

There are frameworks for both Angular and ReactJS that enable web client application designs (and in some cases, code) to be reused for creating native iOS and Android apps.

One option for Angular is NativeScript, in which you use Typescript/JavaScript with Angular to build native apps for multiple platforms from the same source code. Of course, to get the most out of those platforms, you may want or need to add platform-specific code.

While it's not as simple as just rebuilding your ReactJS or Angular code to produce native apps, the reuse of designs, skills, and (some) code make it much more efficient than starting from scratch.

IFTTT (IF This Then That) is a free cloud service which allows you to automate tasks by combining existing services (Google Docs, Facebook, Instagram, Hue lights, Nest thermostats, GitHub, Trello, Dropbox, etc.). The name of the service comes from the simple pattern used for each Applet (automation rule): "IF This event occurs in service x Then trigger That action in service y."

IFTTT includes a Maker service which can handle web requests (triggers) or send web requests (actions). In this case, I use it to invoke the pop/checkIn POST method from the Mongopop REST API whenever I check in using the Swarm (Foursquare) app:

Note that the applet makes a POST request to the http://your-mongopop-ip:3000/pop/checkIn route. The body of the POST includes the required parameters – provided as a JSON document. Each of the VenueName, CheckinDate, VenueUrl, and VenueMapImageURL values are  /ingredients/ from the trigger (Foursquare) event. 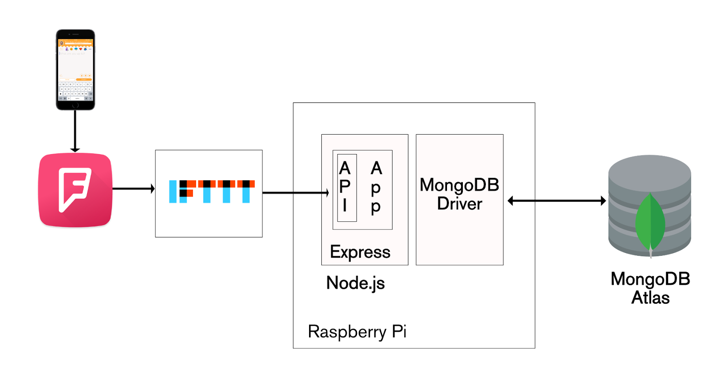 Using the Swarm app I check into FourSquare:

We can confirm that the MongoDB collection has been updated after this check-in:

The first example showed how to record a check-in into our own service as a side effect of checking into an existing service (Foursquare).

What if we wanted to create new, independent check-ins, from a mobile device? What if we also wanted to augment the check-ins with additional data? Another requirement could be to let our team know of the check-in through a Slack channel.

A valid approach would be to build a new mobile client using React Native or NativeScript. Slack and Google Maps have their own REST APIs and so the new app could certainly integrate with them in addition to our Mongopop API. Before investing in that development work, it would be great to prototype the concept and see if it proves useful.

This is where we turn to the iOS Workflow app. Workflow has a number of similarities to IFTTT but there are also some significant differences:

Both applications/Workflows that we build here can be run on an iPad, iPhone, or Apple Watch. 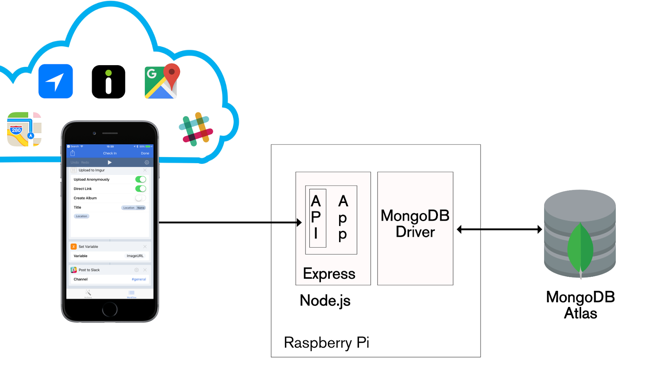 Implementing a Workflow involves dragging actions into the work area and then adding attributes to those actions (such as the address of the Mongopop API). The result of one action is automatically used as the input to the next action in the workflow. Results can also be stored in variables for use by later actions.

This is the Check In workflow:

This video demonstrates the use of the app when run on an iPhone:

The same app/workflow can be run from an Apple Watch:

We can confirm that check-in record has been stored as a document in MongoDB Atlas (note that the database and collection names are defined in config.js):

The second app/workflow retrieves and displays details of the most recent check-in. It performs these steps:

The full workflow is shown here:

Running the app on an iPad produces these results:

Again, the same app can be run from an Apple Watch:

Two of today's biggest industry trends are machine learning and serverless computing. Amazon's Alexa service (typically accessed through Amazon's Echo device) is at the forefront of both. In addition to interpreting voice commands for Amazon's own services (e.g. ordering more coffee beans or playing a particular song), developers can implement their own skills. Many are publicly available from 3rd parties such as Nest, Harmony, and Spotify, but you're free to implement and test your own – submitting it for review and public use when ready.

The business logic behind Alexa skills is typically run within Amazon's serverless computing service – AWS Lambda. Lambda is a great product for services that handle low or bursty levels of traffic – rather than paying a flat rate for a physical or virtual server, you pay a small fee for every event handled (and you even get a low-medium level of throughput for free). If your service really takes off then Lambda automatically scales out.

Assuming that you decide to use Lambda, there are three main components to your skill:

The Mongo Alexa skill has 3 intents/commands:

The intents are defined as a JSON document:

The utterances for each of those intents must also be defined:

Note that no utterances need to be added for the AMAZON.HelpIntent as that intent is built in.

The skill is created in the Amazon Developer Console using the Alexa wizard; where the intentions and utterances can be added: 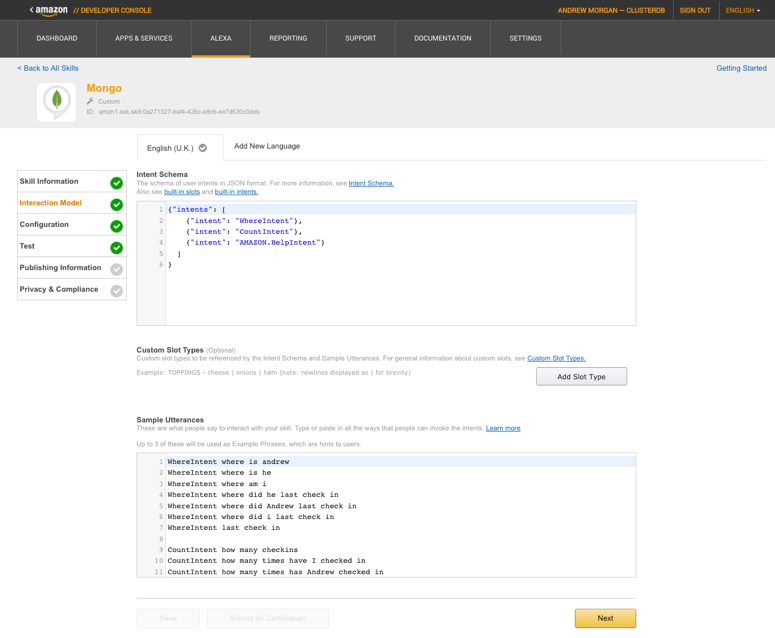 In the next screen, you indicate where the skill's business logic runs; in this case, I provide the Amazon Resource Name (ARN) of my Lambda function: 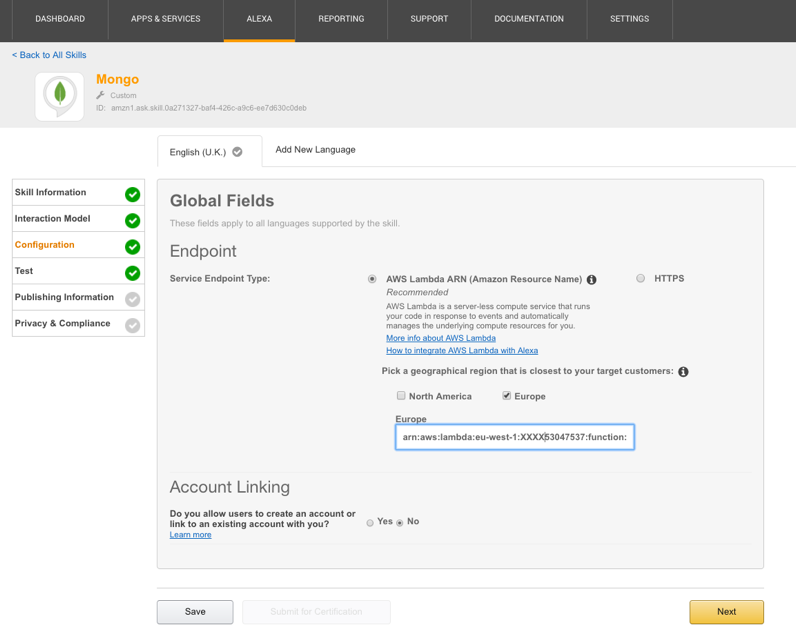 The logic for the Mongo skill is implemented in the index.js file (part of the MongoDB-Alexa GitHub repository):

As explained earlier, the aim of this post is to cover a broad set of technologies rather than going too deeply into any one but explaining a few concepts may help you understand what this code is doing:

Note that this is a simple skill which receives a request and sends a single response. It is also possible to implement an interactive state machine where there's a conversation between the user and Alexa - in those skills, the logic uses both the latest intent and the past context in deciding how to respond. Note that the Lambda function is always stateless and so all data should be stored in a database such as MongoDB.

The skill is deployed to AWS Lambda through the AWS Management Console. The index.js, config.js, and node_modules directory (created by running npm install) should be archived into a single Zip file which is then uploaded to AWS: 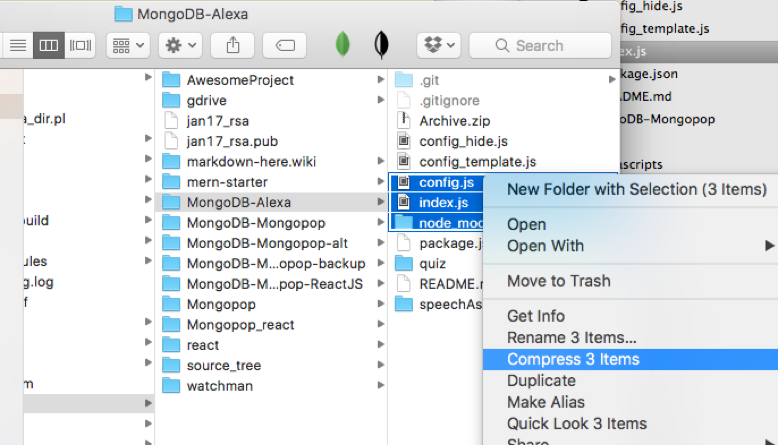 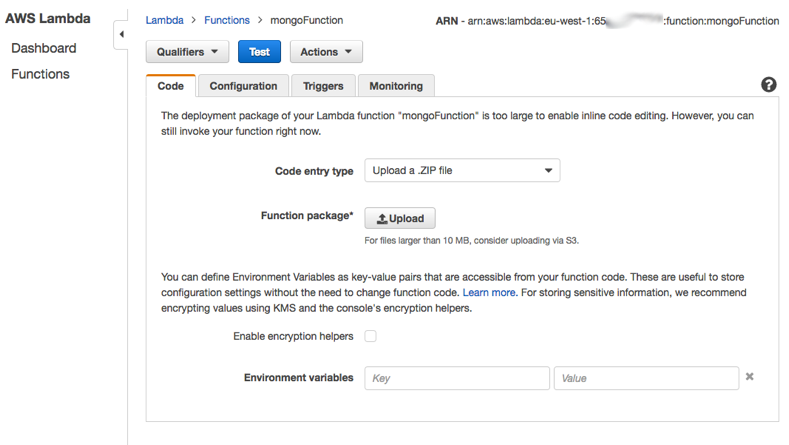 There are a number of extra configuration options – such as the runtime environment to use (Node.js), the user role, the amount of memory to be made available to the function, and how long each invocation of the function should be allowed to run (the function is making external HTTP requests and so it may need a few seconds): 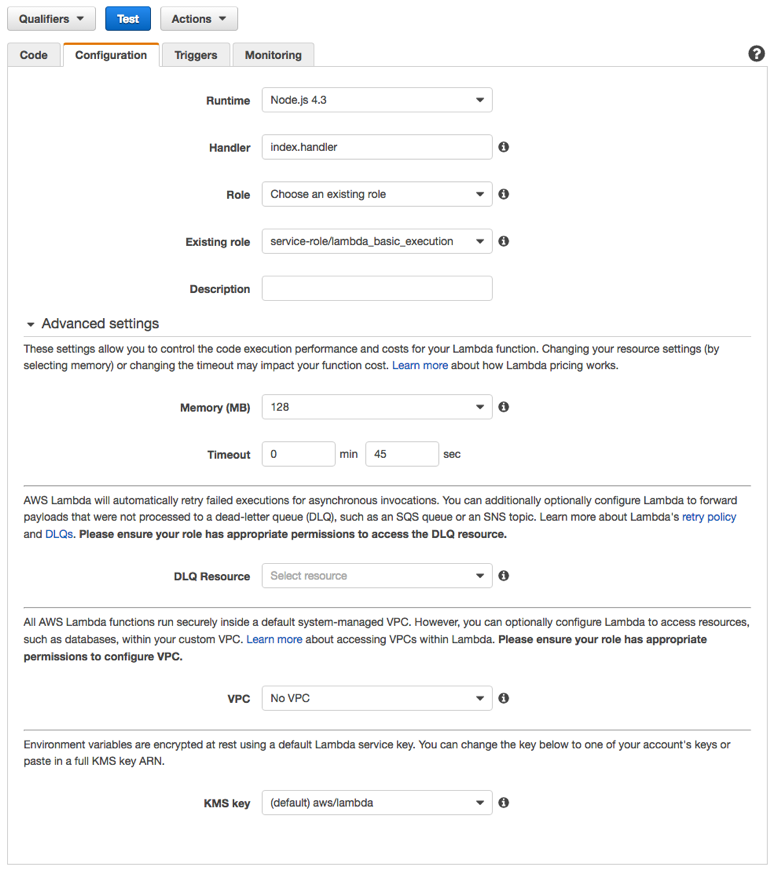 As a reminder, the user speaks to the Amazon Echo device, then the Alexa application invokes an AWS Lambda function, which implements the business logic for the Mongo skill, which then interacts with the MongoDB database via the Mongopop REST API: 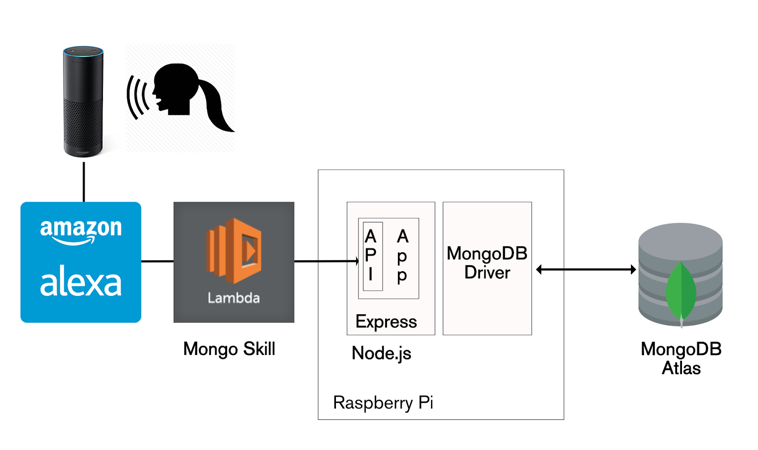 To start, test the simplest intent – asking the Mongo skill for help:

Note that the visual card can contain more information than Alexa's spoken response. For example, if there is an error in the Mongopop back-end, the returned error message is displayed on the card.

Next, we can ask Alexa how many times I've checked in and where my last check-in was. Note that I could have used any of the utterances associated with these intents (and Alexa will automatically convert similar phrases):

Previous posts stepped through building the Mongopop application back-end and then the creation of web client applications using Angular 2 and ReactJS.

This post explored some alternative ways to build client applications; in particular, it showed how to combine existing cloud services with a bit of new logic to create something brand new. We looked at a number of technologies to help build applications quickly and efficiently:

Increasingly, applications leverage multiple services (if only to allow the user to share their efforts on different social media networks). The key to all of these integrations is the REST APIs provided by each service. If you've jumped straight to this post then consider reading parts 1 through 3 to learn how to build your own REST API.

If you're interested in learning everything you need to know to get started building a MongoDB-based app you can sign up for one of our free online MongoDB University courses.