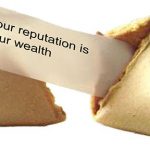 a reputation is a wonderful thing, and something most professionals work hard to cultivate.  whilst it’s tempting to think that our reputation remains static regardless of the context, in reality, it’s something that tends to change depending on our audience.

a recent paper explores how different groups assess us in different ways, and how this influences their formation of our reputation.

the research explores the evolution of reputation in the contemporary art world, where reputation tends to be forged around one's artistic quality or one's commercial appeal.  these tend to have greater importance for different audiences, so for instance, a museum is usually more interested in artistic quality, but a gallery might be more interested in how much a work sells for.

as you might expect, reputation did matter significantly in the work the artists received.  for instance, those with a high artistic reputation gained a lot of work in museums, whilst those with high commercial appeal appeared in many galleries.

what’s interesting however is that crossover appears to be limited.  those whose reputation appealed to the museum's achieved limited success with galleries, and vice versa.

now, of course, the study was restricted to the art community, so what crossover lessons could be applied?  well, suffice to say it reminds us that we need to think of our audience and what they value when you try and forge your reputation.  this was reflected in the study by the cautious demands of public funders of galleries versus the more privately backed galleries that allow a more expansive approach.

there may well be a risk of over-thinking things, however, especially when it comes to fairly benign traits such as being known as someone willing to help others at work.  i wrote last year about a study exploring the role reputation played in collaboration.

it found that the more transparent we are with regards to our reputation, the more likely it is that people will collaborate.  interestingly, when transparency over reputation was combined with knowledge over someone's social connectivity, this saw collaboration levels boosted even further.

so in other words, when people knew both who someone was connected to, and how trustworthy they were, they were much more likely to collaborate with them.  such communities also typically saw uncooperative members gradually ostracized from the group.

“we show that knowing others’ past actions is the key driver of a high contribution level. additionally, knowing who is connected to whom matters for the distribution of contributions: it allows contributors to form their own community,” the authors say.

i suspect that for most of us, that’s a level of reputational awareness that is ample to get us where we need to go.