NGINX Plus Release 7 (R7) comes with a completely redesigned dashboard. The new dashboard makes it even easier to identify and understand problems with your infrastructure and make rapid changes to your configuration. A new Dashboard tab provides a high-level overview of the health of the system and the traffic going through it. From there you can drill down to more detailed information about virtual servers and back-end servers configured in NGINX Plus. You can even make temporary changes to your load-balancing configuration, such as adding, removing, and modifying back-end servers, all from the dashboard.

A live demo of the dashboard is available here. Read on for an overview of the new NGINX Plus Dashboard.

A new Dashboard tab gives a complete, single-page summary of NGINX Plus activity and of the health of your application.

From the Dashboard Overview you can quickly learn:

And a wealth of additional information on the state of your application.

After identifying problems on the Dashboard tab, you can quickly drill down to learn more about them. The new dashboard has a row of tabs along the top for easy navigation.

The tabs have red, yellow, and green indicators for quick and easy identification of health problems. There is a tab for each box in the bottom row of the Dashboard tab.

The Server zones tab gives detailed statistics on the front-end performance of NGINX Plus. Statistics are reported per HTTP virtual server as configured with the server directive in the http block. For NGINX Plus to collect information for a virtual server, you must include the status_zone directive in its configuration block.

The Upstreams tab provides information about each group configured with the upstream directive, which are the back-end servers NGINX Plus reverse proxies and load balances to. The Upstreams tab is specific to upstream groups for HTTP and HTTPS traffic (TCP traffic appears on the TCP Upstreams tab).

On this tab you can quickly find out which servers have failed as well as other valuable statistics:

You can also add, remove, or modify the servers in an upstream group by clicking on the pencil icon next to its name. 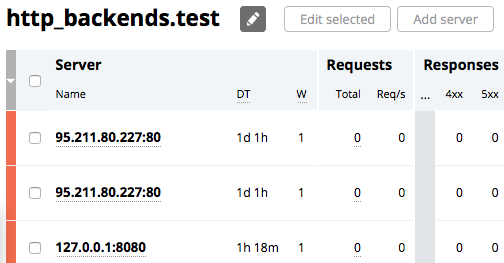 After you click the pencil, the Edit selected and Add server buttons appear.

Clicking on Add server brings up the following wizard: 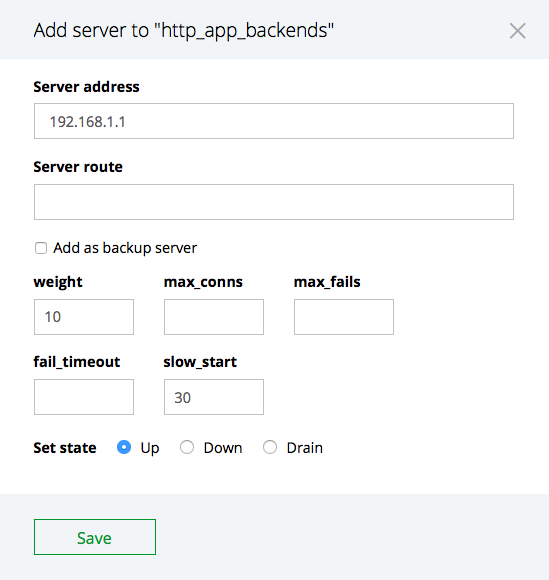 Except for the Server address, the remaining fields are optional and have default values. If you do not click a Set state radio button, Up is selected by default. For details on the configurable fields please see the documentation for the server directive.

To remove or modify servers, click the pencil icon and select the servers to be modified. Clicking on Edit selected will then bring up the following wizard:

From here the various parameters of the server can be modified, or it can be removed altogether.

NOTE: Please keep in mind that these changes are made using NGINX Plus’ upstream_conf interface and do not persist across a reload of the configuration or a restart. Use this interface for temporary or short-term changes such as setting a node to drain or tuning the weights of nodes. For permanent changes, you must update the NGINX Plus configuration file.

The Caches tab provides statistics about the caches configured in NGINX Plus.

The following information is provided:

There is a lot to more explore on the NGINX Plus dashboard:

Building a Web Frontend With Microservices and Nginx Plus