A modern era demands a modern transformation - this is the motto with which contemporary enterprises are drastically making changes in their workforce. Today, every global organization is taking a leap towards a transformative approach to change how they manage their business requirements, workflows, and team organization.

For every IT and software development enterprise, the agile methodology has presented itself as a need of the hour. Its transformational approach has helped organizations move from the traditional application development and testing process towards an advanced method. It allows developers the space to make constant iterations in a complex application and gives testers more time and flexibility to test each feature upon its implementation.

Let us learn more about the principles of agile methodology, its phases of development, testing approach, advantages, and disadvantages.

It is based on the idea of iterative development, where the entire development progress is made in rapid incremental cycles. In other words, instead of testing an application at the end, a specific feature or code can be developed and tested individually. This process allows developers to work on smaller batches of codes or components simultaneously, which is later tested and deployed at a quicker pace. 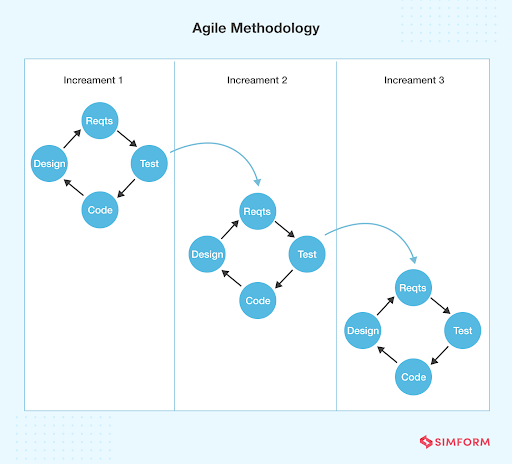 Historically, the agile methodology has evolved to deal with the limitations of the traditional software development and testing cycle, the waterfall methodology. Earlier, the developers and testers had predefined responsibilities where an application was tested only after it was developed and implemented. This made it difficult to communicate about performance issues or modifications.

The communication gap had to be bridged to deal with the testing and iteration challenges that the developers and testers were facing, thus giving rise to an incremental approach. Each incremental cycle in an agile methodology has its own predefined phases, similar to the waterfall model, but in a circular manner.

Smaller codes or components are developed and tested simultaneously within one sprint, giving both developers and testers time to fix any issue in a feature before deployment. This way, a single code or component goes through multiple testing phases until its integration is perfected within the application.

Every application has dynamic requirements, giving a varied range of business advantages. Keeping that in mind, we must consider that the agile testing methodology is not meant for universal development or testing purposes. Irrespective of its popularity and appeal within the development community, the agile testing methodology has certain conditions that make it an advantageous or a disadvantaging method.

Here are some of the advantages of the agile methodology:

Here are some of the disadvantages of the agile methodology:

Agile: A Necessary or a Hyped Methodology?