In my last article here in DZone (https://dzone.com/articles/the-new-computer-machine) I showed how containerization technologies are going to revolutionize the perception we have of a computer machine. In particular, I discussed how we are moving from a computation machine to a coordination machine where microservices represent a key architecture of it. In this article, I will try to explain why we need new programming languages for dealing with the new machine and with microservices.

Such a fact means that communication and coordination are always treated as a software engineering problem, and they are never approached using the bare constructs of the language. I know, It could appear just as a philosophical issue without any practical consequence, but it is not. There are non-trivial practical consequences because programming is always a matter of knowledge management.

The Management of the Knowledge

Let us consider the case of creating a REST service in Java. Is there a single way for doing it? How many frameworks or libraries could we adopt? Just try to look for "Rest server creation in Java" in a search engine and try to enumerate all the different possibilities with all the possible variants. How many are there? Each of them has benefits and drawbacks. Which one do we select for our next project? Which are the rationales for using the selected solution? I am quite sure that some of the following questions will arise:

The End of Programming Languages

Let us continue with the example of the REST server and let us try to visualize the knowledge required for managing the different parts of the project, we could summarize the scenario in the following simple picture. 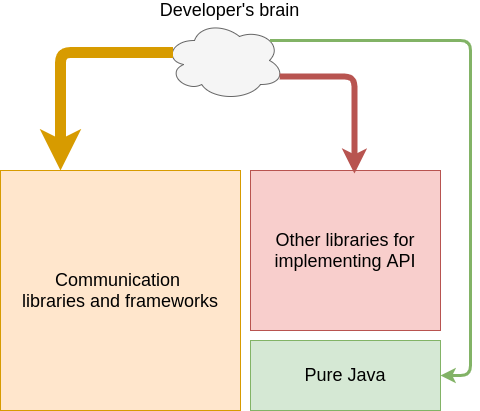 It is just a qualitative representation but, as we can see, the knowledge of a pure language (in this example it is Java) represents just a minimal part of all the required knowledge. It is because usually, a programming language varies slowly over time, there can be structural changes for years. On the contrary, communication and coordination libraries are fewer stables, new releases are frequent and new frameworks appear every month. Software architects, engineers, and developers must continuously check and validate new frameworks to safely use them in production environments. These activities take time because they need to build personal knowledge about the new frameworks and the different concepts behind them. This is why in the picture above, the knowledge related to frameworks is represented with the biggest square.

Think to your personal life: once you learned a programming language, how many time do you consult its documentation?

This means that, in a distributed scenario such as that of a microservice architecture, the choice of the programming language is irrelevant. It is more important to choose a technology that facilitates knowledge management. In particular, since every component of the system needs to communicate, a key point is reducing the required knowledge for dealing with communication and coordination. And that's not surprising because, as I said at the beginning of this article, ordinary languages have been built for facilitating computation, not communication and coordination.

You Take the Blue Pill, the Story Ends...

I think all of you remember the scene where Morpheus asks Neo, in the movie Matrix, which pill to swallow. The blue pill just finishes the story of Neo leaving him into the ordinary life thought for all the citizens of Matrix. On the other hand, the red pill allows him to continue his journey into Wonderland. 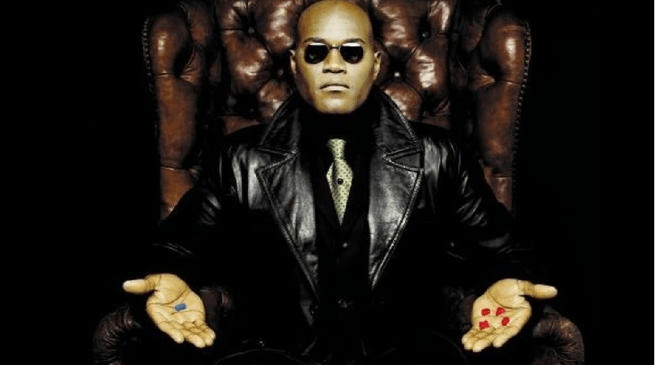 I don't know if you agree with me about what I explained so far. Maybe you do not, in that case, you could leave a comment for starting a discussion and you could stop reading the article here. But if you think that there is some kind of true and you are interested in investigating some new possibilities that go beyond the ordinary and accepted knowledge about programming languages, you could take the red pill and follow me in the next section.

A New Generation of Programming Languages

In the previous section, I wanted to joke with the quote from the movie Matrix and it is possible that I appeared arrogant. I hope it is not, it was a joke. The example I brought only serves to explain how it is necessary to leap beyond the status quo to understand the revolution that could arise from the advent of the communication machine. In my opinion, the change that is going to come up is so deep that we need to re-think the way we develop and engineer the software

The main idea I am proposing here is that we need a new generation of programming languages for directly dealing with the communication and the coordination aspects to reduce the required knowledge dedicated to them. If we crystallize the basic principles related to the communication and the coordination, we can move the majority of the required knowledge from the area of frameworks and libraries to the area of programming languages. 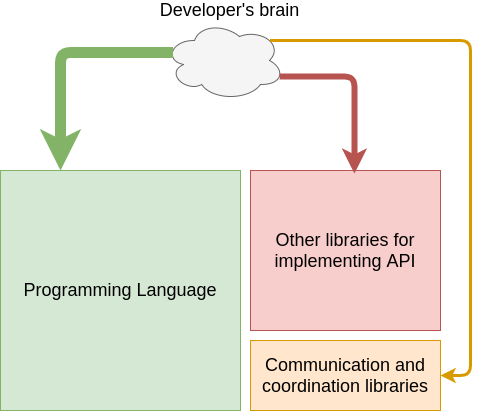 In this case, we will take advantage of the programming language's characteristic of being stable over a long period to reduce the knowledge needed to tackle a project. As a direct consequence of knowledge reduction, we will be able to reduce development time and reduce maintenance costs. These results can be achieved because the concepts of communication and coordination are directly mapped into language constructs and developers do not have to spend time converting them into the use of a framework or library. As an example, consider talking about classes and objects to an audience of Java developers. All of them will immediately grasp these concepts because there is a direct and concrete correspondence with the syntax of the language.

The same could happen if we talk about services, or synchronous and asynchronous communication, or correlation of messages or, again, compensation of activities and so on, to an audience of developers who know the new programming languages. Young developers will learn the concepts of communication and coordination immediately along with the language, cutting learning time considerably. Legacy technology developers who are struggling to cope with the new challenges of microservices could quickly acquire that minimum amount of knowledge for programming them, simply by learning a new programming language.

The contents and the main ideas of this article come from the experience I matured in contributing to the development of Jolie that is a new programming language in the area of services. Started from a research activity at the University of Bologna about modeling Service-Oriented Architecture with process algebras, we noticed that a new language that fully implements a service-oriented paradigm was possible, and we made it.

In Jolie, the unit of programmable software is a service, not an object, not a function, not a procedure, but a service. Such a fact means that the only things a developer can create with Jolie are services or composition of them (that are still services). Here, I do not want to say that Jolie is the new language I discussed in the previous section, but it could be the first example of a new generation of programming languages that can help in clarifying some basic and common concepts they must have. In the following, I present the first list of some concepts which immediately come along with the Jolie programming language:

This is just a list of some of the basic features offered by Jolie. Maybe they do not represent a novelty by themselves, but it is certainly interesting to have all of them embedded in a unique linguistic tool. In particular, the combination of them allows us to address microservice programming differently. As an example, in my first article in DZone I explained how it is possible to approach a Jolie project without taking care of the question: do I develop a monolith or a distributed application? Such a result comes from the fact that in Jolie everything is a service and there is no difference between programming a monolith or a distributed set of services. Jolie is an open-source still evolving project whose engine is developed in Java. It has been tested in production environments where it has been used with success.

In this article, I tried to explain how a new generation of programming languages is needed for dealing with containerization technologies and microservice programming. The main driver is the reduction of the communication and coordination knowledge which is at the basis of each distributed system project. Starting from our experience with Jolie, we can say that it is possible to program using a service-oriented paradigm and that it can help in reducing development and maintenance costs. The community around Jolie is still small but we believe it could grow if we can describe all the novelties it introduces. Creating and introducing a new programming language is a challenging task, but we took the red pill some years ago and we are learning step by step how to manage it. People who are interested in helping the project to grow can contact us, we will be happy to introduce them to the Jolie community!

Jolie was not born in a garage but it emerged from a process calculus we developed some years ago. At that time we developed a three-layer operational semantics for dealing with different aspects of service-oriented computing. Each of them has been mapped into Jolie. From that day Jolie has been evolved enormously, but such a calculus is still a valid reference for theoretically approaching the semantics of Jolie.