The current demand for DevOps engineers in the market is rapidly increasing. This is primarily because these engineers and their operations have resulted in great success for companies all around the world. Business organizations with such engineers are experiencing overwhelming returns compared to the firms that do not employ these professionals. The engineers responsible can position code as much as 30 times faster, and the success rate of this code is doubled, helping a company to gain that competitive edge.

However, the process of becoming an expert DevOps engineer is highly complex. In order to be successful in this field, an aspiring individual must be well prepared and organized. Expertise only comes with extreme hard work and by having a good research background, which serves as a platform for tech-savvy newcomers in particular.

How Do You Initiate Your Career as a DevOps Engineer?

The most important factor an aspiring DevOps engineer should consider is to comprehend the fundamental principles of DevOps. People tend to disregard this factor and gravitate towards mastering the various tools of DevOps learning. Both are important concepts, but without a strong foundation achieved with the fundamentals of DevOps, an individual can never succeed in mastering this career.

I have interacted with several candidates who only have interest in understanding DevOps tools rather than concentrating on DevOps and its application. Another major misconception people have is that they consider DevOps to be only related to automation. Tools such as Jenkins, Cron, and Hudson existed long before the popularity of DevOps, which makes the prior argument redundant.

I also had the opportunity to interview various candidates for the position of DevOps engineer. The analysis that intrigued me the most was whether or not the applicant has a complete understanding of the DevOps concept. Thus, I always used to ask this particular question: "How would you explain the concept of DevOps to a person who has no technical background?”

A difficult question indeed. But the people who have a true interest in this subject have always managed to come up with the correct answer. The usual answer is that DevOps in an automated framework that involves integration and strategic placement.

In technical terms, the answer stands true, but it never satisfied me. I always look to answer questions and solve queries in a practical manner. Mechanical definitions never fascinated me and should be the case in this field as well. The study will only make sense if a person has the ability to gather knowledge about the origin of the concept. Knowing the reason DevOps came into existence and why there is a need for such functionality in the current economy will enable you to understand this postulate in a more efficient manner. It is also critical that an individual or engineer comprehends the challenges a team faces while operating in this system. Only then will the theory and fundamentals of this study begin to make sense.

To conclude the question of where and how do you begin your DevOps career, the most important thing is to emphasize the principles and fundamentals before moving on to mastering the tools of the concept. The most effective way I can suggest is to continuously research the topic. Gain valuable insight and experience. This can also be achieved by going through various books, in particular, the book titled “The Phoenix Project.” The content in the book might be fictional but its application is definitely possible in the world. I would also recommend this book to business officials who are in transition mode and are considering incorporating DevOps into their current operational setup. 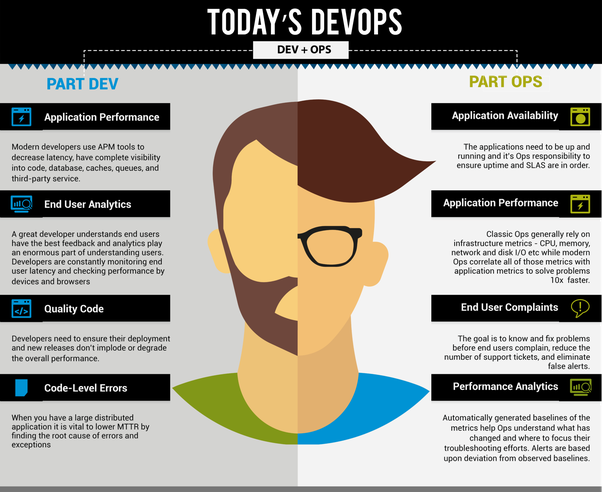 Thinking From the Point of View of a Developer

An individual must be aware when the process of coding, re-engineering, testing, and scripting is being carried out. Gaining knowledge is one thing, and applying it on the field of work is another. Newbies reading this do not need to worry. You need not be an expert developer or programmer with complete knowledge of DevOps tools. You just have to think smart, on your feet, just as an experienced engineer would. Putting yourself in the shoes of a developer helps to solve queries in an efficient manner.

Personally, whenever faced with any challenging situation, I always used to count on my basic knowledge. Again, having a strong foundation helps. Learning the basic programming languages along with a complete command of the fundamentals will help you down the line.

Knowing what a developer is most likely to do while developing software or framing and integrating code into an existing setup is the key to success. This aids in resolving vital issues, which in turn, results in the positioning of code in a productive manner. Therefore, it is essential to know how the operation is to be carried out manually. Only then will the process seem easier when the tools of DevOps are incorporated in the long run.

Gain Expertise in Operations Before Stepping Into DevOps

I cannot emphasize this point enough. Gaining complete expertise in the art of operations and system administration before jumping into the field of DevOps is of absolute importance - a vital point for newcomers and aspiring engineers to note. DevOps exists because of the advancement of the information technology sector. The survival of IT was dependant on two factors, namely sysadmins and Ops (engineers who were skilled in several coding and scripting languages). With the help of the sysadmins and Ops, various systems, such as Linux and Windows, were managed. It also helped to set up and manage various web servers, along with the placement of strategic codes.

The sysadmins and ops engineers were proficient in Shell and used Script to reform and build automated function. All this was carried out way before DevOps was introduced. Now, engineers believe that such proficiency is no longer needed and therefore do not have complete control of these operational tools. This is a misconception that candidates should get out of their heads. Progress is made one step at a time. Similarly, one cannot master DevOps if the concept and fundamentals of Ops are not clear. Thus, an individual must strive to become a specialist in administration/operations first, and then set sail on the DevOps journey. The following list will help you gain more knowledge of DevOps engineering:

This may seem like a grueling task, but it is bound to pay dividends in the long run. You will develop your skills from the roots up so that tackling any challenges in the real-time work atmosphere will become easier. Such is the importance of having operational and administrative experience before learning about DevOps.

Learning How to Effectively Manage Code

Let us get one thing straight: in order to become a DevOps engineer, an individual must first have complete control of a Distributed Version Control System. DVCS umbrella tools such as Mercurial are of critical importance for engineers. DevOps initially became popular due to tools like Git and Mercurial. The old school techniques of using FTP for the purpose of transferring codes are no longer followed.

The dynamic features of these tools helped to bring DevOps into the present market. Thus, it is vital that you gain experience and learn how to use tools such as Git and Mercurial as you are likely to rely on them on a regular basis.

Develop Jenkins as Your Long-Term Server

Let us begin this discussion by talking about Jenkins. It can be called a solution to CI and CD. The purpose of CI is to collect all the code originating from various developers and transfer it to a single system. This is carried out numerous times in order to avoid lag or downstream problems. CD, on the other hand, assembles all this collected code and merges it together, which then is used in production.

Jenkins has existed in the IT sector for a very long time. It captured a considerable portion of the market even before DevOps came into the picture. The incorporation of Jenkins as a tool with the Ops team proved to be very successful in the long run, as the servers were more stable, which also featured automated functions. This eventually led to the domination of Jenkins in the CI and CD segments. There are other tools being used by DevOps engineers with regards to CI and CD. However, my personal preference would always be Jenkins, as it is easy to operate and user-friendly.

The first rule of being a good DevOps engineer is never to be shy when it comes to getting your hands dirty. Management of the identified tools present is extremely significant. This is where we link the factors we talked about before. With unclear knowledge of operations, administration, and DevOps fundamentals, an engineer can never manage configurations efficiently.

When I started to learn about DevOps, I was very much intrigued by configuration management tools such as Chef and SaltStack. I was absolutely fascinated with how configuration management and its tools can help an engineer to manage the infrastructure present as code. Normally, OS installation was carried out manually, which made it susceptible to errors. With the incorporation of the CM tool, such errors are mitigated.

This is one of the factors which I personally feel should develop into a habit. This aspect has been part of the IT sector long before the existence of DevOps. Such tools help you to keep track and monitor a system's records and its resources, in turn increasing productivity, efficiency, and profits in the long run.

This concept has been present in the IT industry for well over a decade. What DevOps did differently was to provide engineers the means to configure, manage, and develop machines on a virtual platform. All this and more is made possible by the existence of tools like Packer. Another sphere in demand is containers, which compared to traditional virtualization, are easier to operate and work with. Containers are popular simply because of Docker, which I strongly recommend for the management of containers and virtualization.

Upgrade to the Cloud

With the incorporation of CM tools, the current market demanded a move into the cloud system. The management requirement of cloud infrastructure initiated a higher demand for DevOps and its services. Engineers must consequently have a clear understanding of cloud providers and their services. These cloud service providers also generate a quality certification which will surely add to your DevOps certification.

As I mentioned, to become a DevOps engineer requires a significant level of determination and hard work, as it is no easy task. Newbies and people with little or no experience in the technical field aspiring to be successful in this genre have an even more difficult task at hand. However, growth and success is only achieved with patience and perseverance. Therefore, do not be afraid to make mistakes, as you can only learn from them.