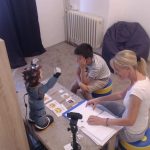 last year i wrote about a new robot that was designed to care for children.  the machine, called nao, is capable of reading the mood of the child, recognizing their family and even understanding your preferences for food, music and so on.

nao joins the growing ranks of care giving robots that include mit’s huggable , which is a teddy bear robot that aims to provide support and comfort to children with chronic illnesses, all the while reporting on various vital signs to their doctors.

suffice to say, interesting though these projects are, they are largely limited to providing a degree of care.  there are, however, a number of fascinating projects whereby the robot aims to teach those in its company.

for instance, a harvard team developed a robot, which has been called root, aims to excite and engage young minds with the world of coding.

“right now, coding is taught at a computer keyboard. it’s an abstract process that doesn’t have a relationship to the real world,” the team say. “what root does is bring coding to life in an extremely fun and approachable way. kids with no experience in coding can be programming robots in a matter of minutes.”

or you’ve got a similar project being developed by researchers from imperial college london, who are developing a robot to help children with autism learn.

autism spectrum disorder (asd) is a condition that is believed to affect one in every 100 people, and impacts our social interaction, interests and behaviors.  teaching to date typically revolves around helping the child convey their emotions, whilst also understanding those of others.

suffice to say, this is sometimes very difficult, which can result in the child not partaking in such activities, and avoiding contact with others.  to see if there is another way, researchers have embarked on a four-year project, called deenigma, which aims to test whether robots can provide a fun way for children to learn about emotions.

central to the project is a consistent means of teaching, with the use of robots allowing for the same facial expressions and gestures to be used in each interaction.

“autism affects people in different ways. however, many struggle with understanding and conveying emotions, often preferring to shut out what they don’t understand. it is important to help them to understand how people convey their emotions so that they don’t find human interactions so confusing and that is why we think our project is so important,” the researchers say.

the robot combines a number of different approaches, including audio and visual techniques, facial recognition and even ai.  it can detect sound and visual cues from the children in their charge.

through the zeno robot, this allows a degree of spontaneous interaction with the child that provides a strong environment for lessons to be undertaken.

“it is amazing to see our technology bringing zeno to life for children with autism. they absolutely love the robot. their faces really light up when they see it. for example, we’ve had feedback from a parent who said their non-verbal child of six spoke for the first time in excited anticipation about his next lesson with zeno, which is amazing to hear,” the team say.

the project is believed to be the first of its kind, as no previous work had allowed robots to interact with children in real time.  the team believe this spontaneity is going to be crucial in the effective teaching of each child by making learning fun and exciting.

eventually, the team hope to provide robots to specialists schools throughout the country to help children with autism learn key social skills.  they also hope that their work, and the data they collect through the course of it, can help to guide work in other countries throughout europe.

it’s certainly a fascinating project, and you can see it in action via the video below.