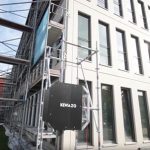 The construction industry has seen a number of fascinating technological innovations in the past few years. Perhaps the most visceral technology was the robotic bricklayer (or semi-automated mason if you prefer its actual title) that has been developed to power construction sites around the world.

“In construction, your design will say that a window is located exactly 30 feet from the corner of a building, and in reality when you get to the building, nothing is ever where it says it’s supposed to be,” its developers say. “Masons know how to adapt to that, so we had to design a robot that knows how to do that, too.”

A second machine of this ilk is called Hadrian X (after the Roman emperor who built the wall between England and Scotland). The makers claim that it will be able to lay around 1,000 bricks per hour, or a shell of a building in around two days. The equivalent for human brickies is around six weeks.

The device has been built by Australia’s Fastbrick Robotics, and is the 2nd iteration of the model. The company claim that the device is capable of ensuring each brick is perfectly shaped for their specific location on the project. What’s more, it can do this without any human intervention.

Laying bricks is not the only part of construction for which robots are being put to use, however. A German startup are attempting to disrupt the scaffolding process. Munich-based Kewazo have developed a robotic scaffolding assistant that they believe makes erecting scaffolding both faster and safer.

It’s a sector that is worth €20 billion per year, with as much as 80% of the cost associated with assembling the scaffolding. Their technology can reduce assembly time by up to 42% by delivering materials to assemblers more effectively. It’s designed to move up, down and along the scaffold structure along a special track that’s attached to the poles of the scaffold. It navigates using a path-finding algorithm and aims to supply the assemblers with exactly the materials they need, when they need them.

The whole system only requires a couple of workers to operate and the founders believe that they are capable of selling over €40 million worth of robots by 2022. Check out the video below to learn more about the technology.

Unexpected Use Cases for RavenDB in IoT

IoT, Blockchain, and the Future

What Separates IIoT From IoT: Uses and Priorities