In about exactly 13 years (target as set by NASA) or rather 7 years (as set by Elon Musk’s Space-X) from now, we humans are going to set foot on Mars and become a truly space-faring race.

We live in pretty exciting times riding on a threshold of Continuous Imagination empowering Continuous Innovation. Every product in every domain is undergoing a sea change, adding new features, releasing them faster than their competitors, adapting to incremental rate of technological substitution. But most of these new feature improvements and product launches are not guided by new requirements from customers. In the face of stiff competition that gets stiffer by the day, evolution and adaptation is the only natural process of survival and winning. As Charles Darwin would put it, it's, “Survival of the fittest.”

But as history suggests, there are and there always will be skeptics among us who will doubt every action that deviates from convention – like those who doubt climate change, the need to explore the unexplored, and the need to change.

A human mind exposed to scientific education exhibits skepticism and pragmatism over dogmatism and largely remains technology-agonistic. It validates everything agnostically with knowledge and reasoning before accepting new ideas. But human progress always comes from philosophical insights — imaginations that led to the discovery or invention of new things. Technological progress has only turned science fiction (read: philosophy) into scientific facts.

With the above premises in mind, in this article, we intend to explore the realm of IoT, its implications on our lives, and our own limitations in foreseeing the imminent future as companies and customers.

We Understand the Internet, but not IoT

IoT, the Internet of Things (or Objects), denote the entire network of Internet-connected devices – vehicles, home and office appliances, and machinery equipment embedded with electronics, software, sensors, actuators, and the wired/Wi-Fi and RFID network connectivity that enable these objects to connect and exchange data. The benefits of this new ubiquitous connectivity will be reaped by everyone, and we will, for the first time, be able to hear and feel the heartbeat of the Earth. 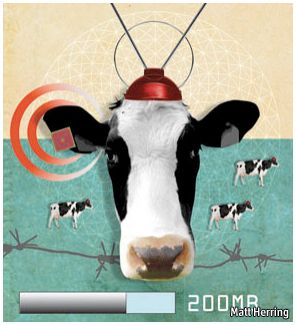 For example, as cows, pigs, water pipes, people, and even shoes, trees, and animals become connected to IoT, farmers will have greater control over diseases affecting milk and meat production through the availability of real-time data and analytics. It is estimated that, on average, each connected cow will generate around 200 MB of data every month.

According to Cisco, back in 2003, the penetration of the Internet and connected devices per person was really low — but that grew at an exponential rate, doubling after every 5.32 years. That's similar to the properties of Moore’s Law. Between 2008 and 2009, with the advent of smartphones, these figures rocketed, and it was predicted that 50 billion connected devices shall be in use by the year 2020. Thus, IoT was born and is in its adolescent phase already. 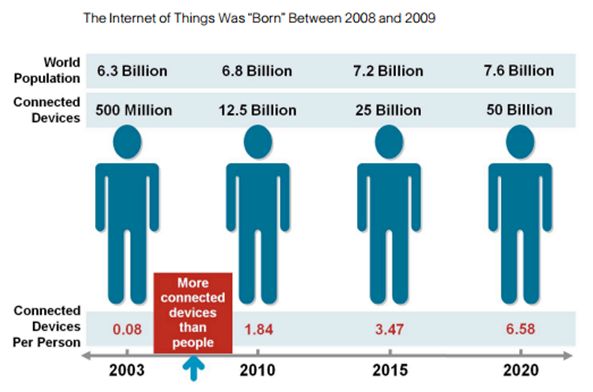 Today, IoT is well underway, as seen in initiatives such as Cisco’s Planetary Skin, smart grid, and intelligent vehicles, HP’s central nervous system for the earth (CeNSE), and smart dust, have the potential to add millions — even billions — of sensors to the Internet.

But just like as in during the social media explosion, the new age of IoT, connected devices, connected machines, connected cars, connected patients, connected consumers, and connected networks of Things we will need new age collaboration tools, new software, new database technologies, and infrastructure to accommodate, store and analyze huge amounts of data that will be generated — like the host of emerging technologies including graph databases, Big Data, microservices, and so on.

But that's not all.

The Internet of Things will also require IOE – Integration of Everything — for meaningful interaction between devices and provides.

But as Kai Wähner of TIBCO discusses in his presentation “Microservices: Death of the Enterprise Service Bus,” microservices and API-led connectivity are ideally matched to meet integration challenges in the foreseeable future. MuleSoft’s “Anypoint Platform for APIs” backed by Cisco, Bosch’s “IoT platform,” or the upcoming API management suite from Kovair is a pointer to all this and shall empower the IoT revolution.

The explosion of connected devices — each requiring a specific IP address — already exhausted what was available in 2010 under IPv4 and required IPv6's implementation immediately. In addition to opening up more IP addresses, IPv6 will also suffice for intra-planetary communication for a much longer period. Governments and the World Wide Web Consortium have remained laggards and skeptical with IPv6 implementation and allowed the exhaustion of IP addresses.

But it hasn't been just governments. Bureaucratic and large, technology-driven organizations like Amazon, Google, and Facebook can remain skeptics under disguise and continue to block movements like Net Neutrality/ ZeroNet, Blockchain technology, IPFS (Inter Planetary File Sharing protocol), the overly cumbersome HTTP as they fear their monopolies will be challenged.

We humans, engaged in different capacities as company executives, consumers, government officials, or technology evangelists, are facing the debate of skepticism vs. futurism and will continue to doubt IoT — embracing it only incrementally until we see true, widespread benefits from it.

And we can see how our skepticism has worked against recognition and advancement.

After remaining skeptical for 120 years, the IEEE finally recognized the pioneering work done in by the Indian Physicist J.C. Bose during colonial rule and conferred on him the designation of the “Father of Telecommunication”. The mm wavelength frequency that he invented in his experiment in 1895 in Kolkata is the foundation of 5G (Wi-Fi Mobile network) that scientists and technologists across the world are now trying to reinvent that will provide the backbone for IoT.

Finally, we leave it to the reader’s imagination about the not-so-distant future, when all the connected devices in IoT begin to pass the Turing Test.

Published at DZone with permission of Souvik Majumdar . See the original article here.