In the first post of this series, we went through the rise and fall of some of the desktop frameworks, mainly Java ones. This post and the following will each focus on a single JVM framework. To compare between them, a baseline is in order. Thus, we will develop the same application using different frameworks. Will use the Kotlin language because some of the frameworks require Kotlin.

We need a simple application to develop for comparison purposes. The Web offers a lot of application ideas:

Years ago, I developed a custom dice-rolling application for the Champions role-playing game. But it’s complex and requires a non-trivial amount of work.

In the past, when I tried Griffon, I used a file renamer sample. In short, it allows to select a folder and to run a batch rename command on its child files with the help of a regular expression. The wireframe looks like the following:

User interactions with the application are as follows:

A couple of other rules apply:

The benefit of this sample is two-fold: the business logic is quite limited, while the GUI has enough behavior to be of interest.

A Quick Overview of Swing

Giving the age of Swing, a lot of material is readily available on the Web. Still, let’s have a quick overview of the Swing framework.

Swing is not the first Java framework. This honor belongs to AWT.

AWT is the first GUI framework, available since 1.0. It’s a thin abstraction layer on top of the system-specific graphical objects. For this reason, an AWT application displays — and uses — the platform’s Look-And-Feel. AWT controls are thus called heavyweight ones in Java.

In the 1.2 release, Java offered Swing. While AWT relies on OS graphics, Swing paints every component itself. To do so, it relies on the Java 2D Graphics library. Java 2D and Swing make up the Java Foundation Classes.

On the flip side, a Swing application consumes more memory than an AWT one.

The Swing class hierarchy is pretty standard for developers. An abstract JComponentclass is the parent. A Containerclass represents a component that has children components.

As the diagram shows, Swing makes use of some of the AWT classes.

This theoretically allows you to mix components of both frameworks. Yet, you should avoid doing this in general since the mix of AWT components, which are heavyweight, with (lightweight) Swing components, can end in odd behaviors.

Swing offers a full-fledged event system. It’s based on the classical Observer pattern.

For example, here’s a simplified view of the JButton class diagram for the ActionListener:

Classical layouts are available, such as BoxLayout — which can be either vertical or horizontal - and GridLayout. It’s possible to design any application by combining them.

For most applications, the nesting of layouts will be too deep. A powerful alternative to nested layouts is the GridBagLayout: it allows the precise placement of components on a parent container. 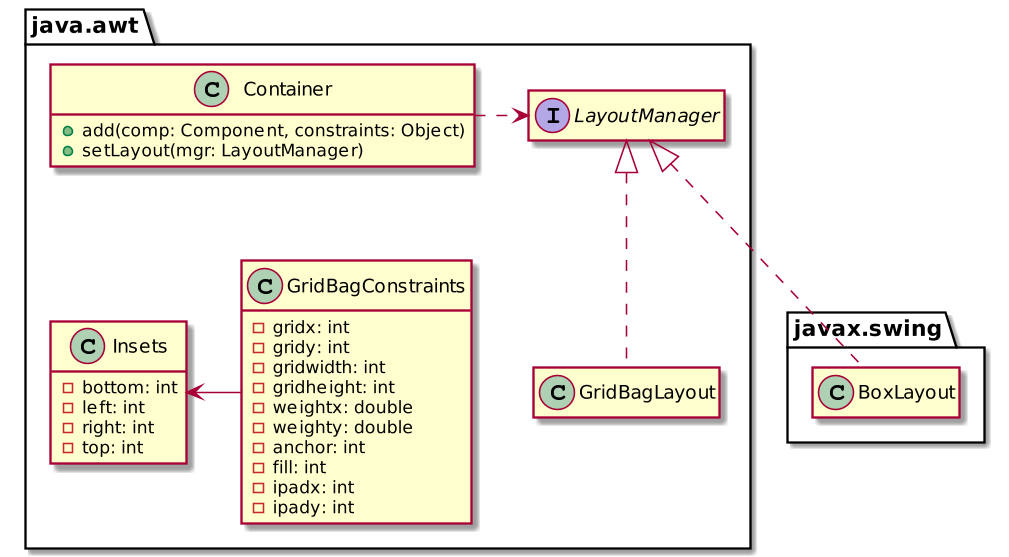 Of course, generics would allow stricter type-checking. But Swing was designed a long time before generics and the API never did use them — and never will because of Swing’s status.

In Java, the code is boilerplate-y. Kotlin can improve it, thanks to extension functions, and named/default arguments.

Here are the lessons I learned, in no particular order:

Event Bus for the Win

This is not specific to Swing: introducing an Event Bus between event producers and event listeners allows to decouple the latter from the former. If you’re interested to read more about the Event Bus, please read a previous post on the subject.

In the sample, the Event Bus implementation is Green Robot.

To rename, the Apply button needs data: the path, the regex, and the replacement. These data are available in the three different text fields.

How can one access these data in the button? At least two different ways are available:

Moreover, when the value of either the Regex or the Replacement text fields changes, the application needs to refresh the right column of the table.

My preference goes to the second option to decouple components from each other.

This is the flow’s representation: 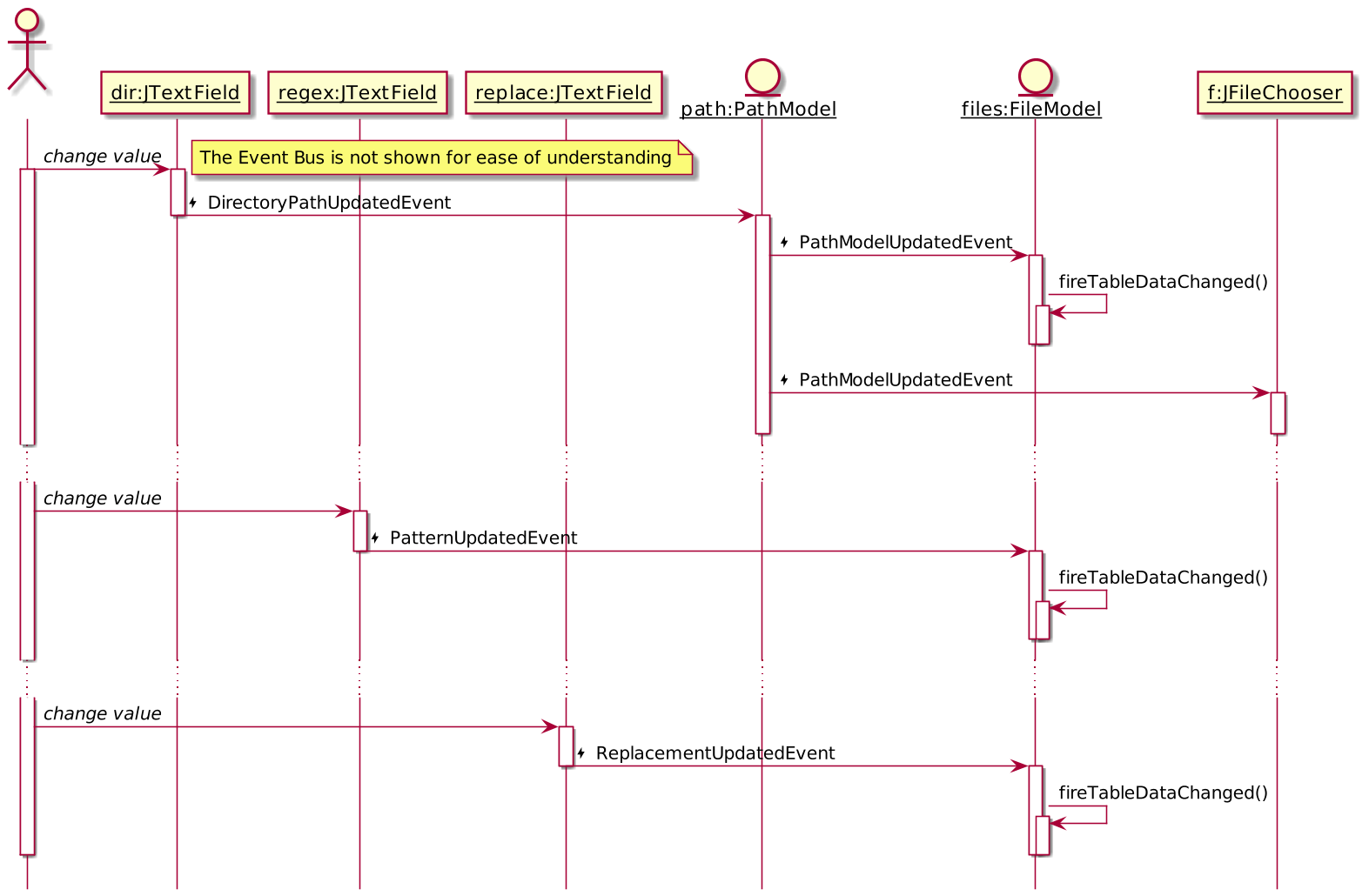 PathModel is a singleton that has no GUI associated. With the help of the Event Bus, it allows us to have a single place to listen to events, and dispatch them afterward.

Components Are Not Scrollable

While nobody expects text fields or buttons to be scrollable, it’s a different matter for text boxes and tables. But by default, no Swing component is scrollable. To make such a component scrollable, one needs to embed it in a JScrollPane component.

One can customize the scroll pane in a fine-grained way, but it works out-of-the-box with JTable. For example, column headers are always visible by default.

Swing decouples components from the data they display: JTable store its data in a TableModel, JComboBox in a ComBoxModel, JTextField in a Document, etc.

Regarding events, models are the objects to listen to. For example, Document offers fine-grained events when its content changes: proper change, insertion, and removal.

The following class diagram is a summary: 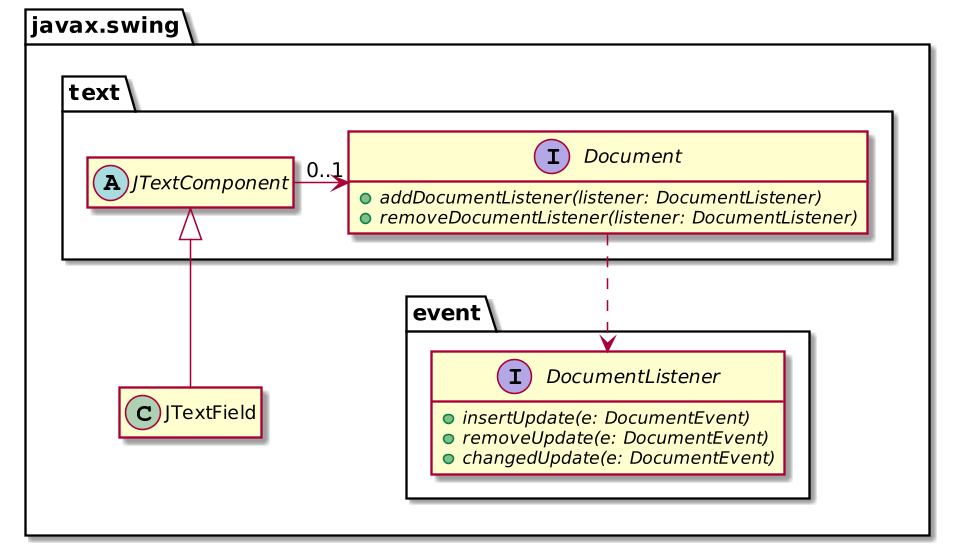 In the sample app, different text fields need to send events when their content changes. By taking advantage of Kotlin, it’s possible to handle this in a centralized place:

The Swing threading model is easy to get wrong. The most important rule is that no long-running task should ever run on the main event thread, known as the Event Dispatch Thread.

Tasks on the event dispatch thread must finish quickly; if they don’t, unhandled events back up and the user interface becomes unresponsive.

In the sample app, I favored the second approach, as renaming is the only task that can potentially run for 'a long time.'

While quite old, Swing still gets the job done. It’s the baseline with which we will compare other approaches.

If you’re interested, you can run the application by yourself.

Thanks to Hendrik Ebbers for his kind review.

The complete source code for this post can be found on Github in Maven format.

Originally published at A Java Geek on January 17th, 2020.