All reporting tools are capable of handling computed columns and data grouping/sorting. Some even provide methods for performing inter-row operations and for referencing cells in relative positions and sets, making complex computations possible.

For example, you might want to list clients whose sales account for half of the total sales. Without a special data preparation stage, we must hide the ineligible records using the functionality of hidden rows or columns, but can’t really filter them away. Another example is sorting a grouped report having detailed data by aggregate values. We need to first group data and then sort it, but many reporting tools can’t control the order of grouping and sorting.

Years ago, relational databases were the only report data source. Today, the report data source could also come from NoSQL databases, local files, data downloaded from web servers, etc. These non-relational data sources lack a standard interface and syntax for data retrieval; some don’t even have basic filtering abilities. But the filtering operation and even the associative operation are necessary during report development. Reporting tools normally support the two types of in-memory operation, but they can only handle them well when data amount is relatively small. With a large amount of data, the memory will become overloaded. Also, most reporting tools are not good at processing multi-level data such as JSON and XML and are not able to create dynamic code to access remote web server to get data.

The Issue of Performance Optimization

The above issues can be solved by adding a middle layer — a data computing layer — to the conventional double-layer reporting architecture. 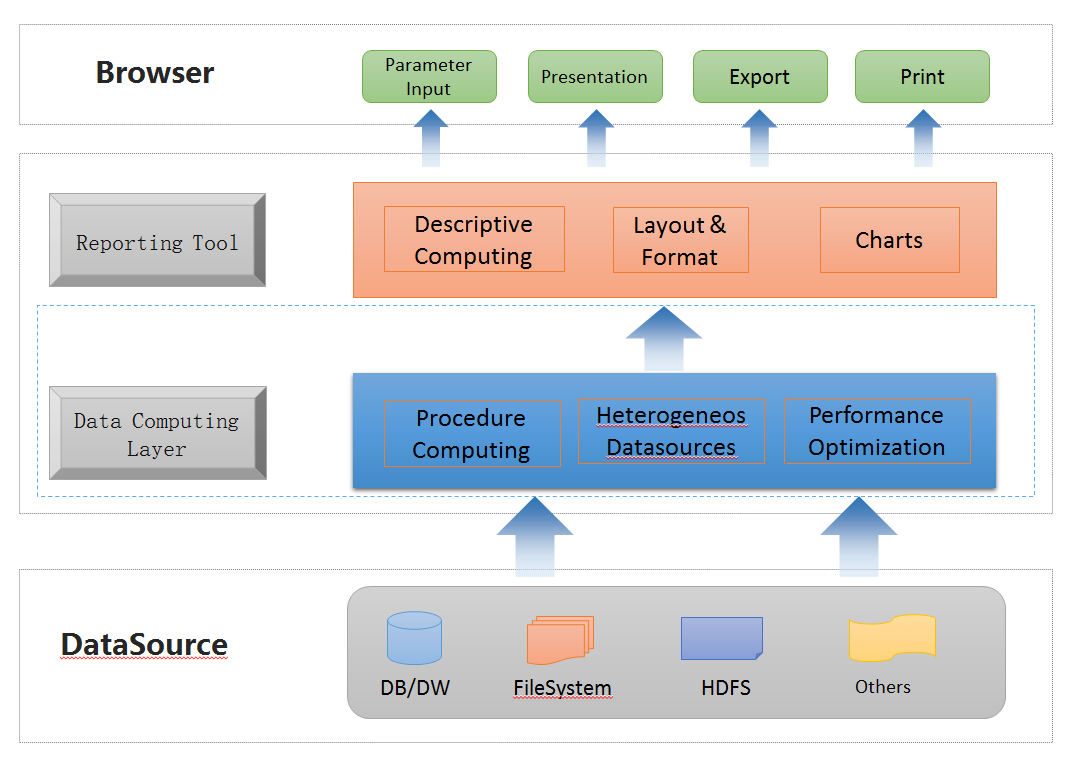 A data computing layer can deal with all the computations mentioned above, leaving a reporting tool to handle the data presentation and a small number of intuitive computing scenarios that the descriptive mode is good at handling.

Though invisible, the data computing layer actually exists in conventional reporting architecture. Proofs are the uses of the stored procedure of the data source and the reporting tool’s user-defined data source interface. The stored procedure can perform some procedural computations and performance optimizations, but its working zone is within a single database, which is equivalent to processing within the data source. Handling computations that need to be handled outside of the data source is beyond its ability. There are limitations to its application. Theoretically, all problems can be solved by using a user-defined data source, for which almost all reporting tools provide the interface, so the method is used more widely.

Published at DZone with permission of Buxing Jiang. See the original article here.