i recently experienced a major failure in an interesting attempt at self-service automation — self-serve beer taps at a milwaukee brewers game. if self-serve beer would work anywhere, you’d think it would work in the beer capital of america — milwaukee, wisconsin. 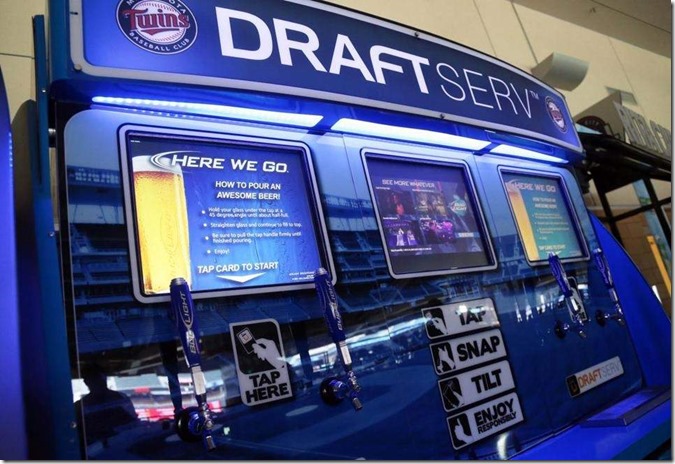 if the system worked, self-serve beer taps would require fewer beer vendors, saving the concession company money. it could reduce time waiting in line, increasing convenience for the customers. and i admit it was a fun novelty to try out the new system and pour my own beer.

for a self-service system to work well, it has to be so extremely simple and usable, that customers can literally “walk-up and use” the system without instruction. however, self-serve beer taps are unique, in that they have to be far easier to use than other self-service systems, like atms or grocery checkout systems because customers become increasingly impaired by the product.

so let’s look at how the system works from an ideal perspective.

that sounds pretty simple, but let’s look at the problems with the experience.

you have to wait in line for a cashier

i’m not a big fan of replacing people with machines, but isn’t the main benefit of a self-service system to save money on employees? and aren’t customers supposed to benefit by spending less time in line? yet, even with several beer tap systems sitting unused, customers have to wait in a single line to purchase cards from the cashier. the line wasn’t that long at a late season brewers game, but i imagine that the line would be much longer for a more popular game. i found out later that the cashier had an even more important job than to sell cards.

you need to buy a card

when i got to the cashier, i used my credit card to buy a beer card, which i then tapped on the beer machine. why the extra step of purchasing a beer card? wouldn’t it save a few steps if i could swipe my card at the beer machine itself? it could even accept cash purchases as subway ticket machines commonly do. i’ve seen coke machines recently that accept cash and credit cards, but i suppose the limitation with beer is that it has to be monitored to prevent underage buyers — another reason why beer can never be completely self-service.

the timer is scary

immediately after selecting the type of beer you want, a big timer appears on-screen with a scary countdown. your immediate thought is, “oh crap, i’ve got to hurry before time runs out!” unless you’re a professional bartender, most people don’t know how long it takes to dispense a beer. the countdown timer scares you into hurriedly pouring your beer, which leads to the next problem.

when amateurs hurriedly pour a beer from a tap, the cup fills up with foam instead of beer. i used the system three or four times, and this happened to me every time, and it happened to nearly everyone else i saw pouring their own beer. the key is to take your time and pour it very slowly, yet the prominent countdown scares you into the exact opposite action — pour as quickly as possible before the time runs out.

each time i filled my cup with foam, the cashier patiently came over, swiped her master beer card, and poured the beer for me correctly — slowly filling it with a very tilted cup. she did this automatically for nearly every customer as if it was just an expected part of the process. the customer would screw up pouring his or her beer, and she would come over and do it correctly for them.

who does this benefit?

while the ux designer in me was fascinated at trying out this new system and noting its flaws, the beer drinker in me simply wanted another beer, but this system was too difficult. self-service systems only work when they benefit both the company and the customer. with the need to employ a cashier to sell cards, check id’s, and pour beer for most customers, and the fact that a lot of beer is wasted when customers fill up their cups with foam, i can’t see how it benefits the company. with the need to wait in line to buy a card, and with the inability to pour their own beer, it doesn’t benefit customers either.

i think the lesson is that some things aren’t meant to be automated. if i have to pay an outrageous price for stadium beer, i’d rather have an expert pour it for me. if you’re going to make customers do the work with a self-service system, make sure you design and usability test the system to ensure that it’s extremely easy to walk up and use.