I have drawn my inspiration from articles published on this subject. While I was learning, I had to move around a bit to make sure I have the setup right, the steps, and the small workarounds in place. This article summarizes all of that in one place, shows the steps with screenshots and console outout. Hope this will be of some help!

When we run the command for the first time, we will see the VMs getting created (1 for the Control Plane, 1 worker node, memory allocation of 2 GB each and a virtual disk space of 20 GB)

Install Docker Desktop for Windows 10 (Professional or Enterprise based on our home PC. OS). Do not try the hacks of making it work for Windows 10 Home as the results may be unpredictable. Instead install Docker toolbox, which works with Windows 10 Home. (https://docs.docker.com/toolbox/toolbox_install_windows/), download the latest 19.03.1. After installing Docker Toolbox, from the desktop icon, right-click and ‘Run as Administrator’. It will open the terminal, run the initial setup, and gives you the default command prompt for you to run the docker commands

At the time of start, you might get an error that says that there is a VirtualBox error check that failed. All you need to do is the following:

If there is a problem in startup (next time you open) with the message about certificate error/cannot reach server, you can do the following.

Important Commands to Check the Installation

Code Setup and Testing the Above Configuration:

You will find details at the link https://nodejs.org/de/docs/guides/nodejs-docker-webapp/

In the folder structure you created for your node program, create a Docker file.

You will also add the folders/files that you don’t want to be included in the final build in .dockkerignore (e.g node_modules as we are running command ‘npm install’ to download dependencies anyway)

Run the docker commands for Build and Run now

If you run ‘docker images’, you will see the new image.

So we have now 49062 mapped to 8081. We have to get the IP address of the Docker toolbox virtual machine.

Run the curl command to test it or through your browser.

Now that we have tested the Node program, let’s see how it can be tested from an Angular app (to give you the end-end full stack flow)

Angular application: I am not going into the details of Angular as you can learn from the tutorials as I did. The HTTP call is being made in the lines highlighted in Yellow below

After you start the Angular runtime and type the URL: http://localhost:4200/ you will see the response output of the node application. Enable Developer Tools console for debugging.

Publishing the Image to The Minikube One Node Cluster

‘docker images’ command shows the images from local docker repository/environment. But when we run ‘kubectl create deployment node-sample1 –image=<image_tag>’, the image is pulled from the minikube repository and not from the local docker repo. So the command when executed will show an error on minikube dashboard that repository for the image cannot be found

You can look at https://medium.com/bb-tutorials-and-thoughts/how-to-use-own-local-doker-images-with-minikube-2c1ed0b0968  to see how the minikube can work with local docker images and don’t always have to pull from a central registry

a) C:\windows\system32>minikube docker-env (running the following command will give the below output)

d) Run the command ‘docker build -t rudra2/node- sample2.’ The image will be created in the minikube environment. If you run the ‘docker images’ command now, you will see the newly created image

e) Run the command ‘kubectl create deployment node-sample1 –image=rudra2/node-sample-2’. The POD will be visible on the dashboard (but will have to disable the imagePullPolicy)

f) Edit the YAML file of the node from the Dashboard. Change to ‘imagePullPolicy:Never’ from ‘imagePullPolicy:Always’. This means that it will look in the local repo and not a remote repo. The deployments will change to GREEN from RED. 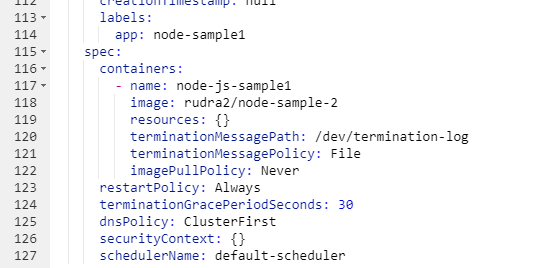 The service will expose the POD outside the cluster. Service will have a Cluster IP. The pods will also have unique IPs. Run the second command as shown above and your new service will be listed as shown below

This command will open a browser and show the output

This, they say is the primitive way of making the service accessible to the outside world. But if the Node IP changes, a new port will be assigned and we will have to change every calling application with the new port. This approach cannot be used in PROD. For learning purpose/POC/Demo, we can use. 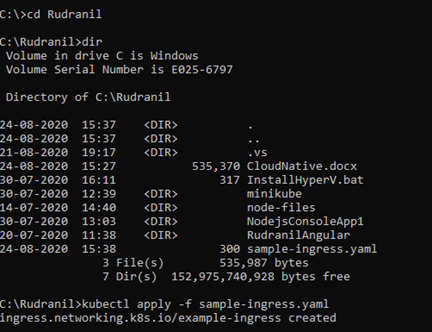 j) Scaling the application: You can see the internal structure (YAML) of Deployments/POD, Services from the dashboard. Every such object type will have a SPEC and STATUS

This is primarily done by changing the number of replicas

‘Kubectl get rs’ shows the number of replicas

New replicas can be configured either by running the kubectl command or we can edit the YAML file directly. 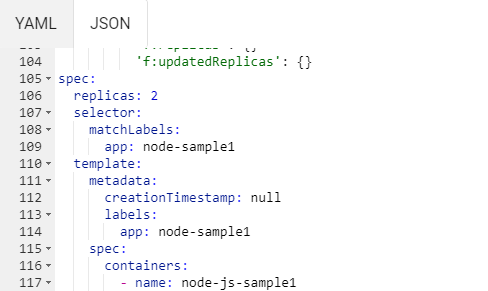 On the Dashboard, we will see the 2 pods.

The basic steps would include the following. To start with, you can get the free account trial activated

a) Setting up the remote registry on Azure. We need a place to store the docker image so that the AKS can access that

I had some problems running from docker-toolbox. But it can be run from Docker. I installed Azure CLI for Windows, open a command prompt and executed the following commands

When you type “az login” now, you will get the following information in your command prompt

Now if you go to the HOME link and Navigate to subscriptions, you will see the default subscription

Navigating to Home-Resource Groups will show the new entry

If you navigate to Home-All Resources, you will see the new entry

b) Import the image into the Azure container registry

Login to the acr

TAG a container image for ACR. The image needs to be tagged with the login server of the registry

TAG the local image to ACR

View the Image in the ACR

Before pushing the image, we have to enable the Access Key, otherwise the ‘docker push…’ command will throw an Unauthorized Error in the end

Push the image to the Azure Container Registry

c) Build the AKS cluster and set up the application container

To fix this, we have to add the extension aks-preview (as the issue is provided in the preview)

To connect kubectl to the Kubernetes cluster

To verify if kubectl is connected to the right AKS, run the command and we will see the details for the node on AKS.

Create a YAML file with the following mappings/details to map the container. The YAML file is bigger than this, which will have the Deployment details.

Details can be found in https://docs.microsoft.com/en-in/azure/aks/tutorial-kubernetes-deploy-application