Returning to my Management, my mini-series of blog… (Non-Commissioned Managers, Analysts aren't managers and Managers who are not managers)

Lots of Agile advocates have a real downer on Management. I think (like myself) they dislike the authority conferred on “managers”. This may be dressed up as a rational dislike of top-down reasoning - and they have a point - but this also throws the baby out with the bath water.

To an engineer much of this administration looks pointless, or needless, or counter productive. An engineer looks at administration and sees a things which can be engineered away by a rational process with rational decisions by rational people.

But… Not all activities are rational. Not all processes can be decomposed in an analytical fashion and rebuilt.

And since there are people in these “systems” rationality often goes out the window. What is rational to ME is not always rational to YOU.

Sure, as the knowledge in society increases, as engineers understanding increases, and as our computational power increases, more an more processes and activities can be examined rationally and subjected to rational, engineered, solutions but the devil is in the detail.

During the late 1980s and into the 1990s the Business Process Reengineering movement thought it could reengineer businesses along rational, engineering lines. It was an abysmal failure. Yet remnants of this movement still exist, perhaps most clearly seen in the ERP and CRM space.

The problem is: the world is messy. More specifically, people are messy. 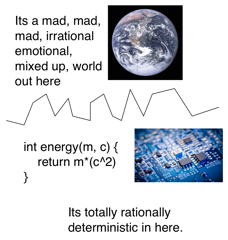 A lot of what we call “management” is about interfacing the messy world to the rational engineering world. But even the rational world isn’t what we think it is. The rise of the behavioural economics has done much to debunk economists faith in homo economicus.

For me management work sits at that point where the logical world meets the fuzzy world, where binary meets analogue, where Turning machines meet non-deterministic processes, and where homo economicus and Robert Lucas meet homo reciprocans and friends The Undercover Economist, Gerd Gigerenzer, Kahneman and Tversky, Mullainathan and Shafir, and a bunch of utility-deniers.

“Managers” aren’t the only people in this space. By the way, Business Analysts and Product Managers inhabit the same space but their aims are different. All these roles work to make the messy, fuzzy, emotional and irrational world interpolate with the logical, rational, emotionless world of machines and deterministic processes.

Perhaps more interestingly Scrum Masters and Agile Coaches operate in this space too, that’s why I consider them managers, or at least non-commissioned managers.

I pushed authority to one side before. Many coaches and Scrum Masters - as originally defined but not always implemented - deliberately leave authority at the door. They attempt to fill a management like role but without using authority.

In some ways this is good, it brings a different approach, sometimes better but sometimes worse.

Personally I learnt a lot of my management philosophy in similar position: Branch secretary of a political party. I had very little authority - its a community of volunteers, while I did control much of the administration I could also be ordered about by the massed ranks of comrades.

And there in lies the point.

Administration may decay into bureaucracy, and we all dislike bureaucracy don’t we? Except some bureaucracy may be necessary to smooth running of organizations. I recently came across this quote:

Authority, administration, bureaucracy and management aren’t automatically bad, a little of each might be helpful to smooth operations but take too far they can be counter productive.

Notice I’ve said nothing about Leadership here, that is another - but related - topic.

Published at DZone with permission of Patrick Bakker. See the original article here.