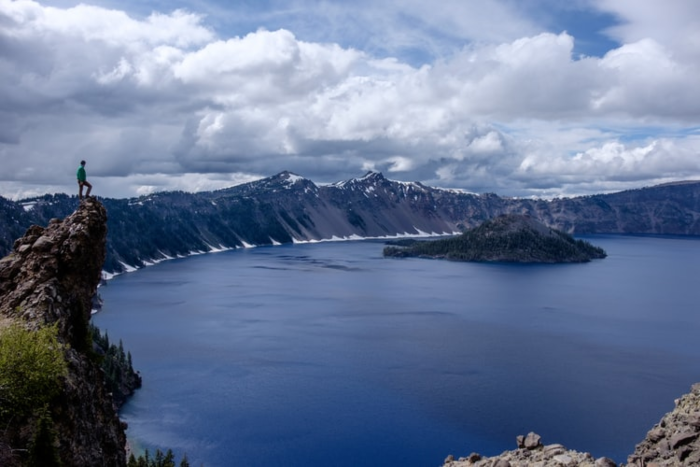 Learn how to manage APIs and Edge with Kubernetes.
​

Refactoring applications into a microservice-style architecture package within containers and deployed into Kubernetes brings several new challenges for the edge. In particular, as an increasing number of microservices are exposed to end-users, the edge must support managing a multitude of configurations for a wide range of microservices.

You may also like: An Overview of APIs and API Management

This article explores three strategies that engineering teams can apply to effectively manage the edge when migrating to microservices and Kubernetes: deploying an additional Kubernetes API gateway; extending an existing API gateway, and deploying a comprehensive self-service edge stack. 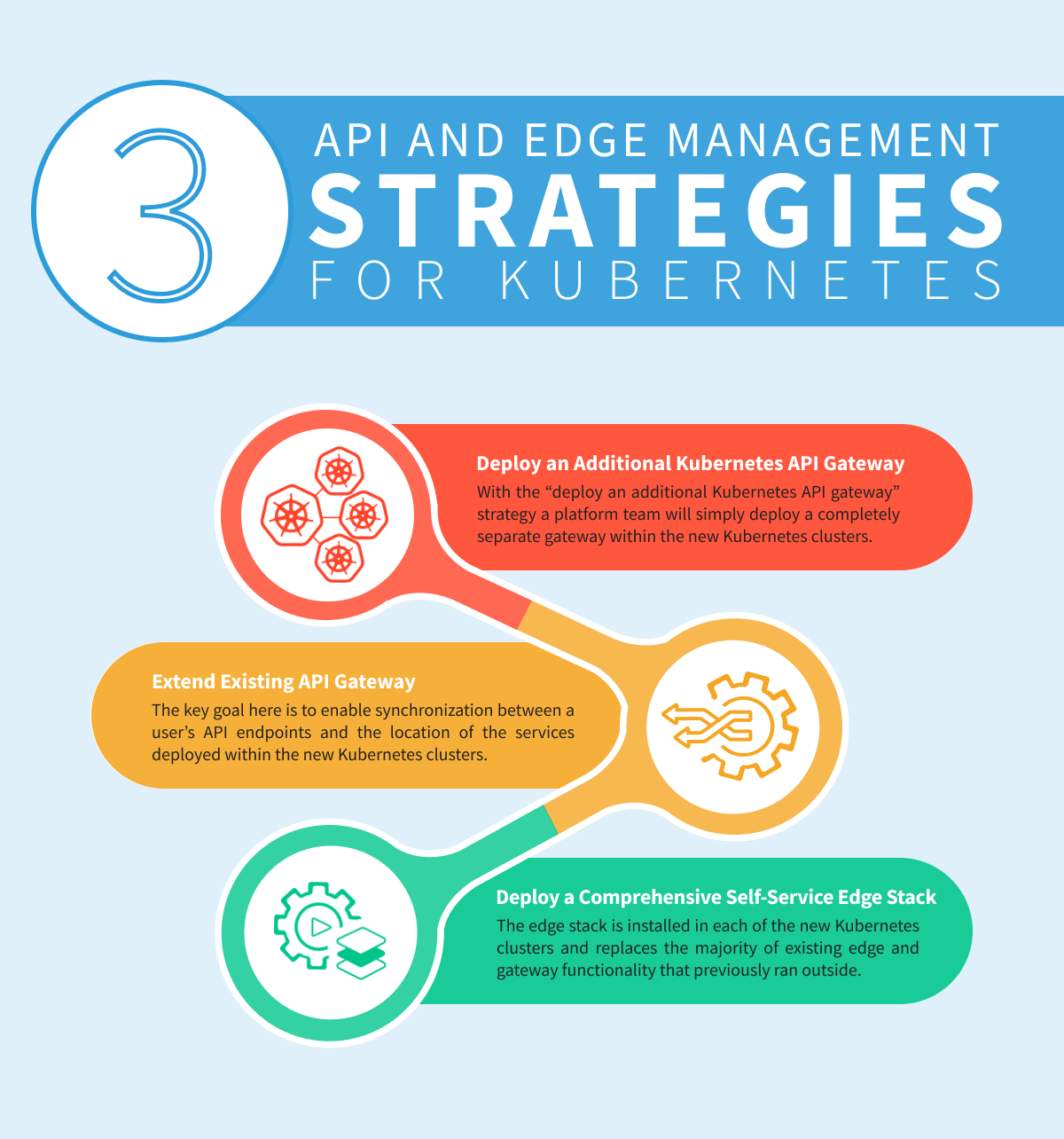 The presentation of each strategy includes a technical overview, a discussion of the associated pros and cons, and an analysis of how the solution can meet each of the two primary challenges with an API gateway when adopting Kubernetes.

As suggested by the name, the implementation of this strategy simply consists of deploying an additional API gateway at the edge. Typically an organization with a web-based application that has existed for more than a few months will already have a series of components knitted together that provide edge and API management, such as a Layer four load balancer, Web Application Firewall (WAF), and traditional API gateway.

With the “deploy an additional Kubernetes API gateway” strategy a platform team will simply deploy a completely separate gateway within the new Kubernetes clusters.

The second variation consists of deploying the new API gateway “alongside” the existing solution. With this approach, traffic is forwarded from an edge component higher up the stack, such as the layer 4 load balancer, to the new gateway, which in turn forwards the traffic to the Kubernetes services.

Once this strategy has been employed it can be operated and maintained using one of two approaches. Within some organizations, the existing platform or infrastructure team will be responsible for deploying and maintaining the new gateway.

Other times, a completely separate team will own the new solution, or the responsibility will be pushed onto the individual microservice development teams. Regardless of the exact organizational structure, many of the routine changes that need to be made to the edge will need to be coordinated across the multiple API gateways and related components.

This strategy is easy to plan and implement: simply deploy and operate an existing Kubernetes-specific API gateway alongside the existing solution. However, this approach typically adds additional management and coordination costs to routine API changes, and dealing with extra interdependent layers at the edge can increase the time taken to locate and fix faults. 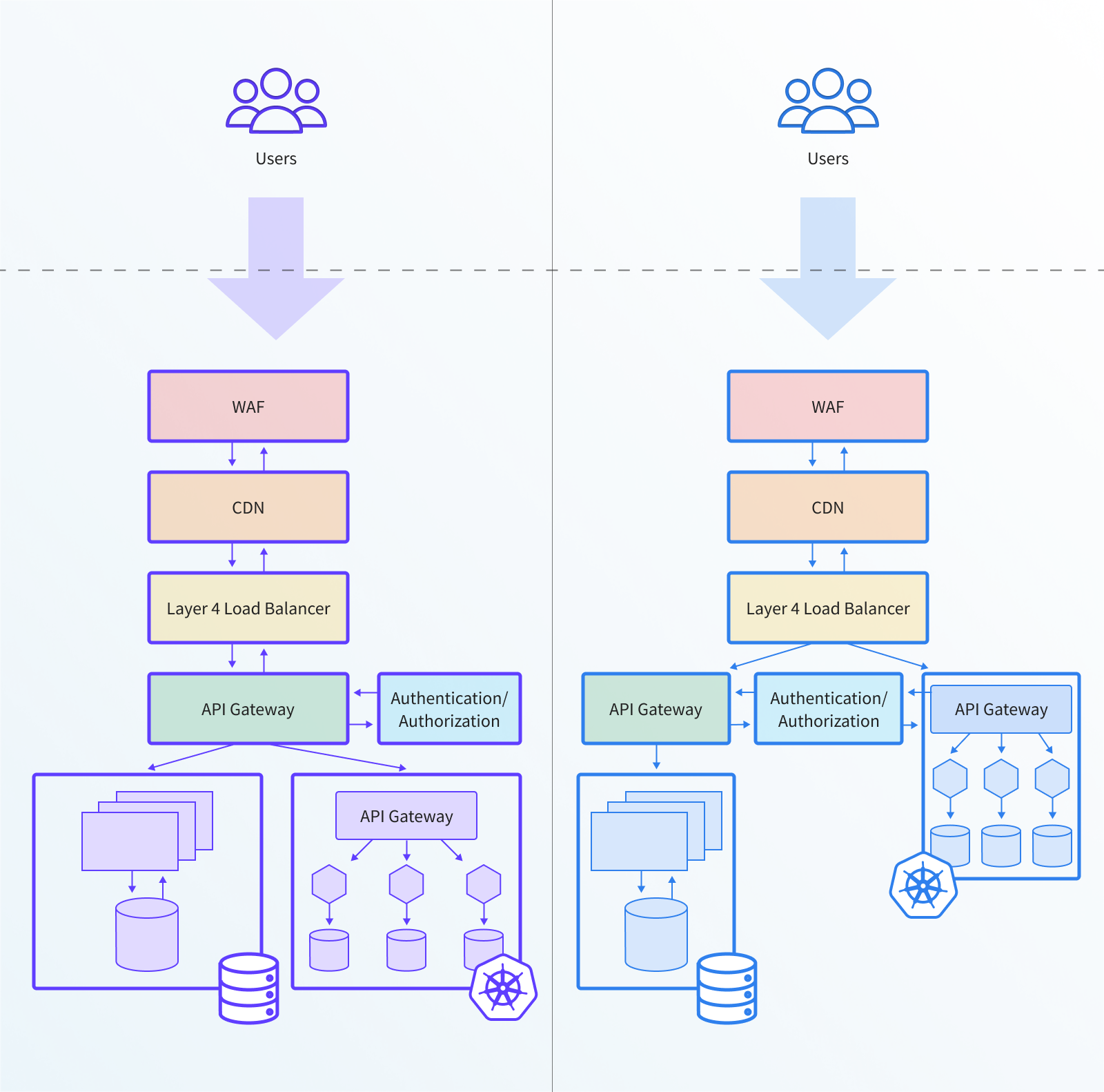 The following section highlights the key pros and cons with the “add API gateway” strategy:

The “extend existing API gateway” strategy is implemented by modifying or augmenting the existing API gateway solution that is currently deployed in production. The key goal with this modification is to enable synchronization between the API endpoints that a user accesses and the location of the corresponding services deployed within the new Kubernetes clusters.

This strategy ensures that the platform team will only be dealing with a single API gateway and set of edge components. However, this approach requires modifying the existing gateway configuration workflows in order to avoid any potential collision between the existing routes/services that are running outside of the Kubernetes cluster and the routes/services that are being deployed within the new cluster.

The following diagram provides an architectural overview of the typical implementation of the “extend existing API gateway” strategy. In this diagram, the ingress controller is deployed on a standalone pod in the cluster, reading Kubernetes ingress configuration. The configuration is then passed to the existing API Gateway/load balancer, which is deployed outside of the cluster. 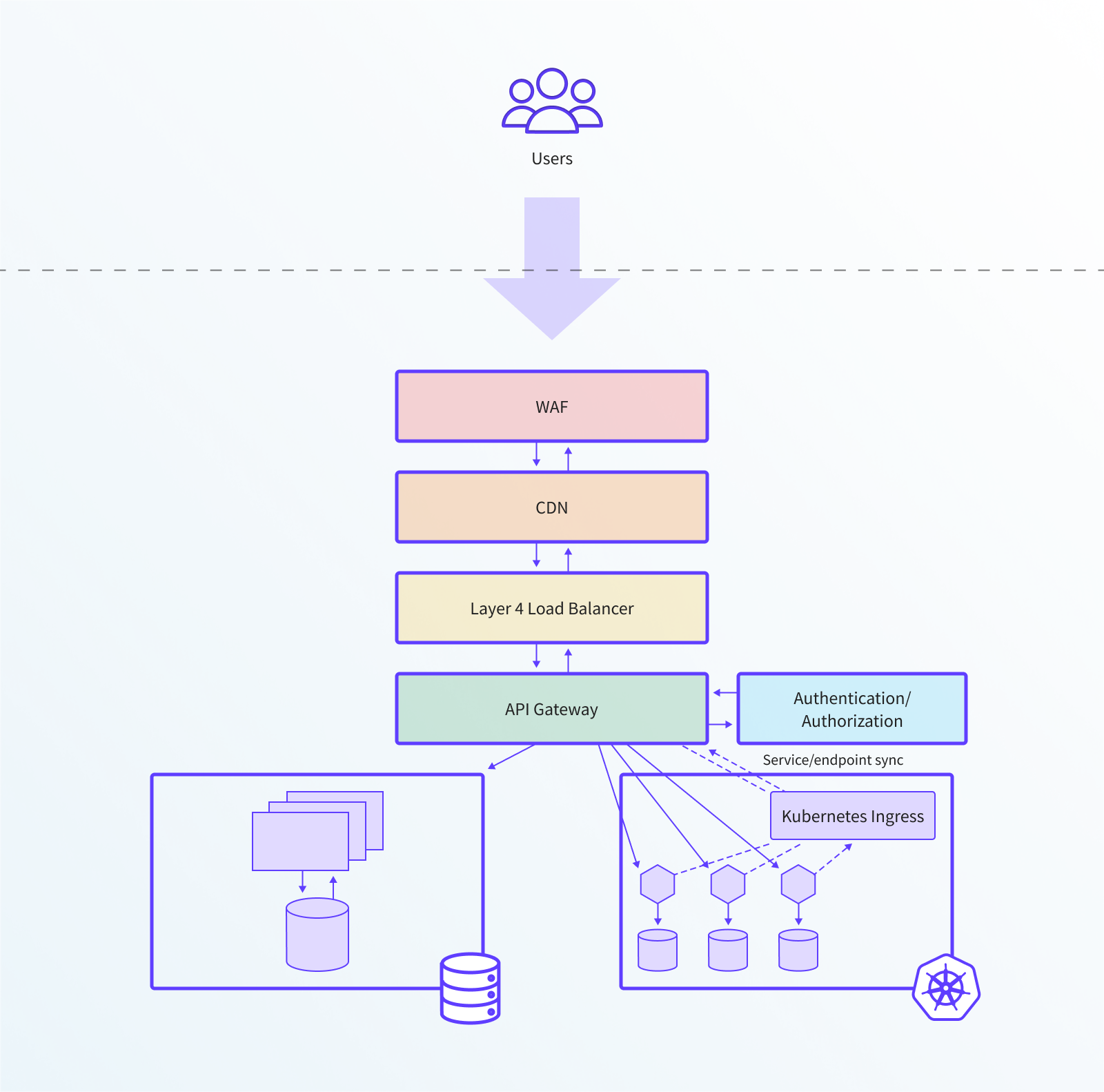 The following section highlights the key pros and cons with the “extend existing API gateway” strategy:

To scale edge management using this API gateway extension strategy, an organization should fully embrace the recommended configuration approach as specified by the Kubernetes ingress controller, and shift away from the traditional API/UI-driven configuration model of their existing gateway.

Also, a standardized set of scripts should be used so any modification of routes to services running outside the Kubernetes cluster does not conflict with the services running inside the new cluster

Before adopting the strategy, an architectural roadmap review of current and anticipated edge requirements for microservices is essential. Ensuring the existing gateway/load balancer supports these requirements will avoid a situation where adding another API gateway is required to support an unexpected requirement.

Deploying a self-service edge stack consists of using a Kubernetes-native API gateway that contains additional integrated supporting edge components such as asWAF and authentication/authorization. The edge stack is installed in each of the new Kubernetes clusters and replaces and consolidates the majority of existing edge and gateway functionality that previously ran outside the cluster.

Once this strategy is deployed, it is common to see the platform team responsible for the underlying infrastructure components (and their successful operation and monitoring) and also providing “sensible defaults” for managing cross-functional requirements, such as default timeout values, retries, and circuit breaking.

The independent microservice teams are then fully empowered and responsible for configuring the edge stack as part of their normal workflow; for example, when a new service is deployed, the development team will also specify the routing configuration and override the existing cross-functional defaults.

Using this strategy ensures that the platform team will only be dealing with a single API gateway and consolidated set of edge components. Using a Kubernetes-native edge stack also provides easy integration with this platform, and supports cloud native best practices, such as self-service, declarative configuration and a “single source of truth” for configuration.

The following diagram provides an architectural overview of the two typical implementations of the “deploy a comprehensive self-service edge stack” strategy. 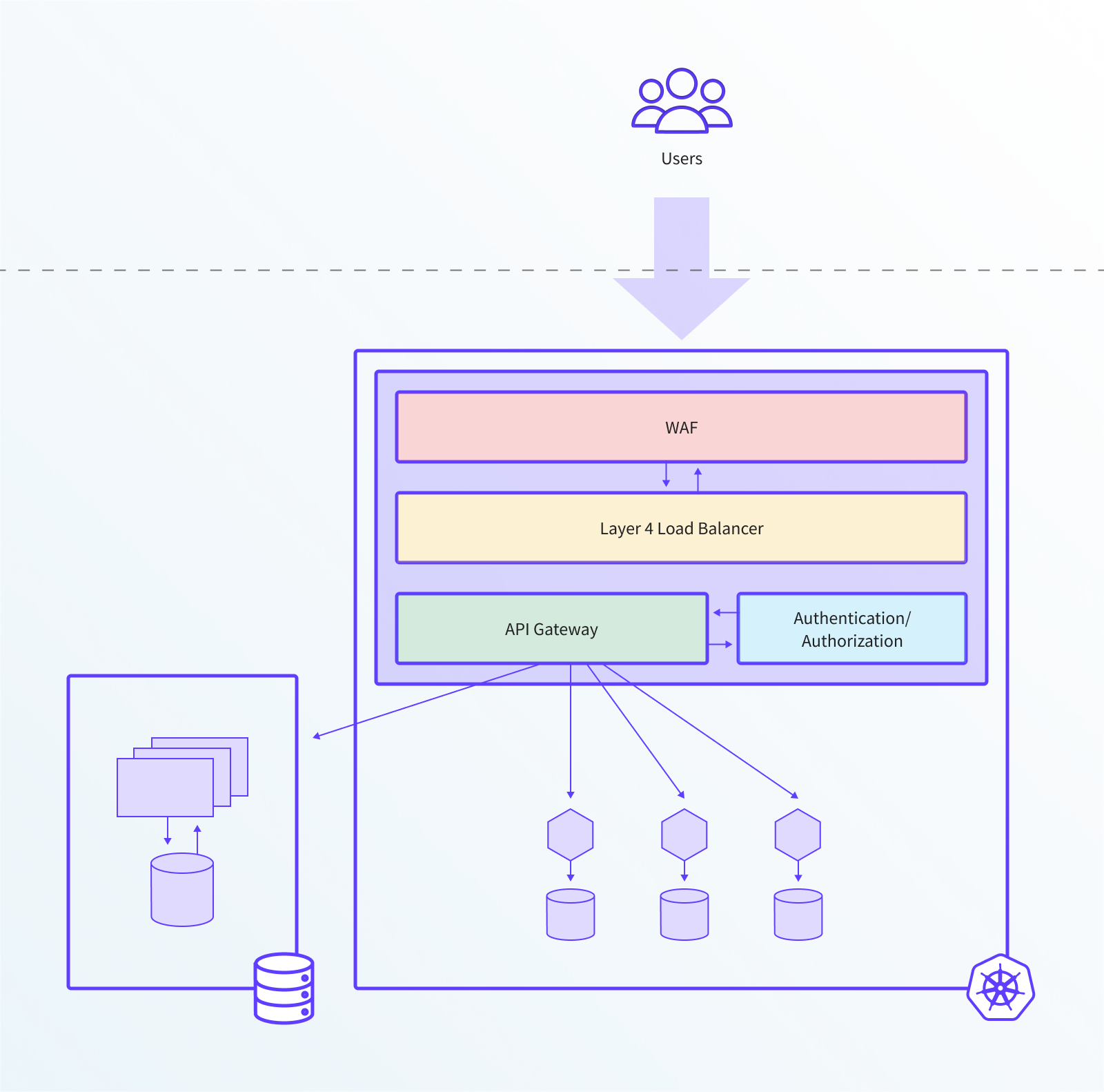 The following section highlights the key pros and cons with the “deploy a comprehensive self-service edge stack” strategy:

To support the diversity of the edge services, adopt an edge stack that has been built on a modern L7 proxy with a strong community such as the Cloud Native Computing Foundation’s Envoy Proxy. The breadth of the community helps ensure that the core routing engine in the edge stack will be able to support a diversity of use cases.

There are three primary strategies for managing APIs and the edge of a system when migrating to a microservices-based architecture deployed into new Kubernetes clusters. This article has provided an overview of the three approaches: deploying an additional API gateway; extending an existing API gateway, and deploying a self-service edge stack.

The Future of API Management