today the timefinder team (its me ;-)) announces the availability of timefinder v4!

timefinder allows universities and schools to reduce and even avoid conflicts in the timetable! timefinder will improve the work of the human timetabler at the institute. a lot of work which would be done by hand to create the educational schedule could be done with timefinder.

timefinder is completely free and independent of the operating system (via java 6 ). the power of timefinder is its algorithm. it eliminates the hard-conflicts of nearly all datasets of the international timetabling competition 08 in under 20 seconds on a normal laptop. and it can be applied on real data like the one from university of bayreuth.

pictures tells a lot more than 1000 words, so here are some screenshots and here is a video as introduction .

the first screenshot is how editing of events works 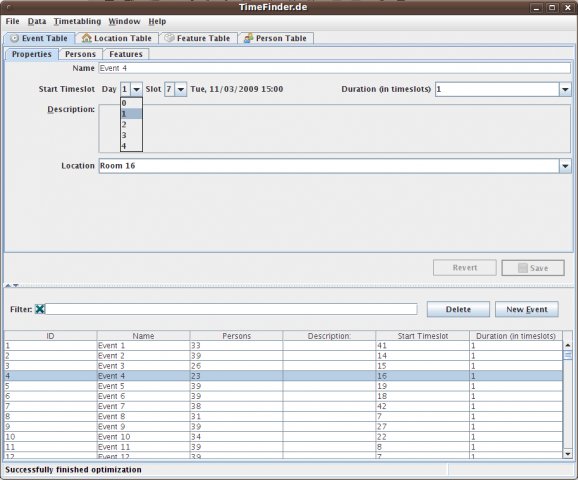 and here you see how timefinder optimized an instance of the international timetabling competition 08 : 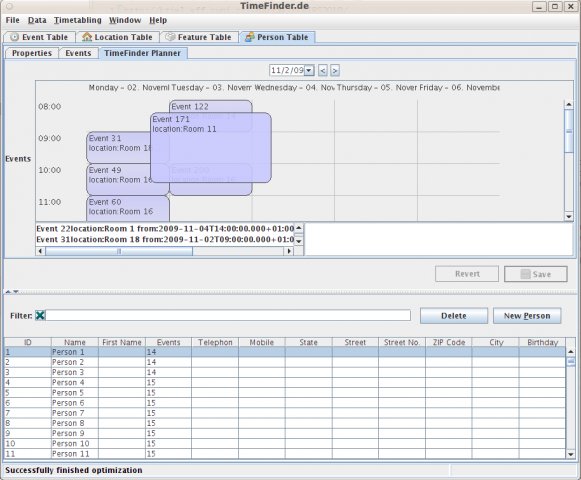 see some more screenshots and look again here for the video documentation .

start timefinder right now via webstart ! or download the jar which is faster!

the timefinder team worked hard to add the following features in this version for you:

no software is complete or bug-free, and so is timefinder which is beta software at the moment. you are free to support timefinder with your constructive critique, blog posts or even money if you like to make it better. feel free to contact me or raise an issue if you find a bug.

check the documentation or watch an introductive video to get an overview. keep in mind that updating documentation is still work in progress.

if you know some java and like coding guis, databases or algorithms you can contact me and win experiences via joining the project!

especially the calendar component timefinderplanner could be alluring for people with java2d experiences or interests in this area.

this application wouldn't be the same without the following nice open source projects:

... and last but not least thanks to netbeans - the only ide you need
and yourkit profiler , which offers open source projects a free license!