Over the last two decades, open source has been expanding into all aspects of technology: from software to boring enterprise software, from open standards to hardware, from small disruptive startup technologies to large open patents. In this short post, I will try to call out three tendencies that I think are reaching the tipping point in open source.

For good or bad, as the name open "source" suggests, this model has been primarily focused around the source code. Regardless of the intent or the believes, if we look at the open source communities, they are primarily composed of developers who are working on the source code. If we look deeper, the tools used in open source projects such as source control systems, issue trackers, mailing list names, chat channel names, etc. — they all assume that the developers are the center of the universe. And that has caused a big loss. It is a big loss not having creative people, designers, document writers, event organizers, community managers, lawyers, accountants, and many others as part of the open source communities.

We don't have such individuals actively participating in the open source communities because we don't have the processes and tools for such an inclusion yet. We need and want non-code contributions, but we don't have the means to measure their value, nor ways to reward their efforts in return. Reward by recognition from peers, by the community, by the employers, or anybody in general.

As a result, it has been a lose-lose for decades. And we can see the implications in many open source projects with ugly looking websites, amateur logos, badly written and formatted documentation, disorganized events, etc. All of that leading to the so-called "open source companies" filling the gap when it is inherently an open source problem.

The good news is that we are getting various signals indicating it is reaching the tipping point and a change is on the way:

And there is a little-known secret. One thing that non-coders (and those new to open source) do not realize yet is that the easiest way to be recognized and become part of an established open source project is by performing non-coding activities. Nowadays, with complex software stacks, and tough competition, there is a pretty high bar for entering a project as a committer. Performing non-coding activities is less popular and it opens a fast backdoor to the open source communities.

Open source may have started in the hacker community as a way of scratching developers' personal itch, but today, it is the model where innovation happens. It is the model that even world's largest software companies are transitioning to in order to continue dominating. And why is the enterprise so interested in open source? The "Open Source in the Enterprise" free e-book I came across recently lists a few good reasons:

Many of these and other benefits of open source are recognized by large organizations which leads to even more open source adoption through company acquisitions. Building an open source company takes many years of effort in the open. Hiring developers who are good and also willing to work in the open, building a community around a project, and a business model is delicate effort. Companies that can manage that are particularly attractive for investment and acquisition as they serve as a catalyst in turning the acquirer an open source company at scale.

Above is a list of the biggest open source software companies acquired in the current year. The list of open source companies and the following acquisitions is getting bigger every other day and this trend is only getting stronger. 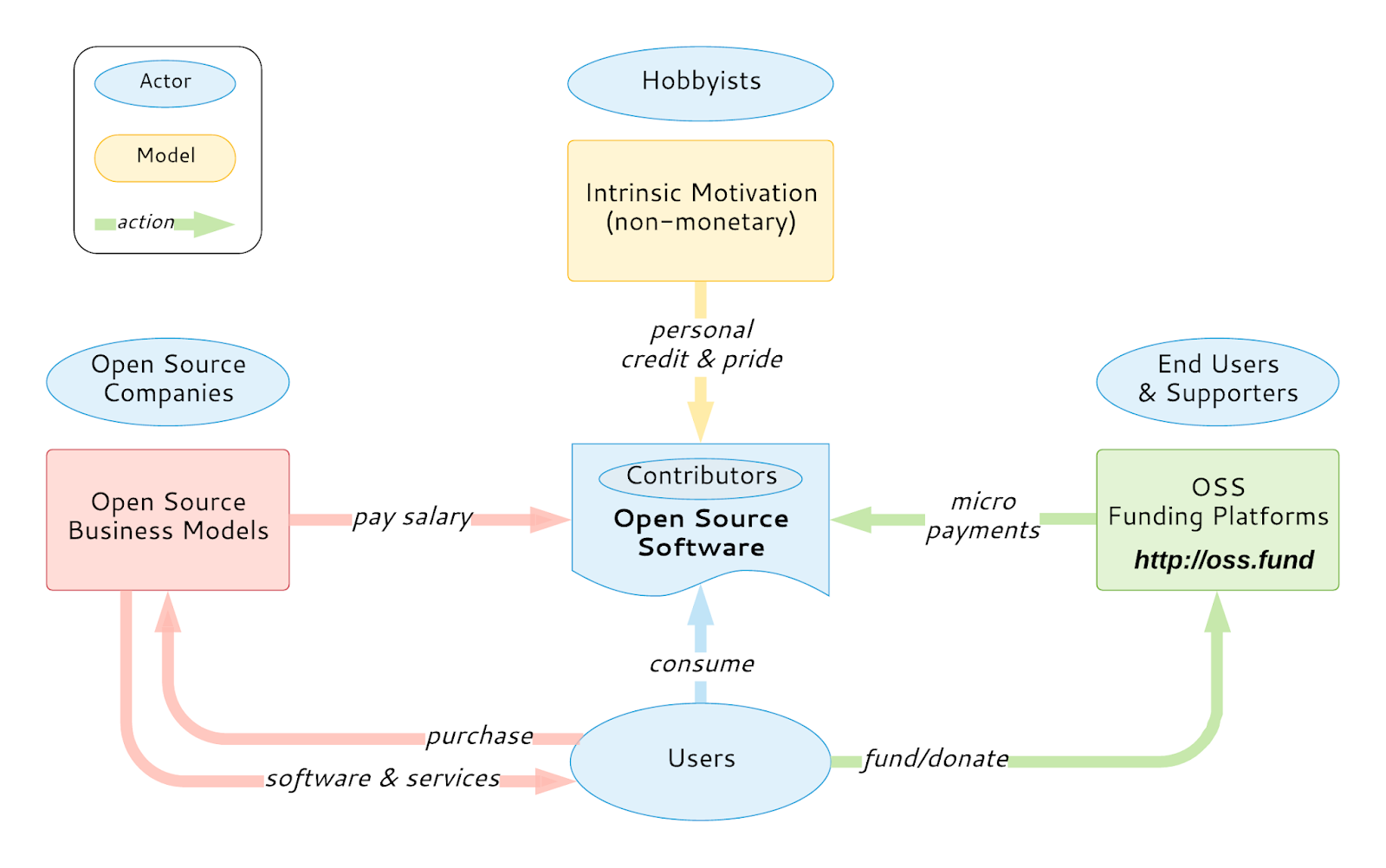 The diagram above shows the three intensive channels for open source contributors:

While the hobbyist and hackers started the open source movement, it got quickly turned into an enterprise monetization model. Now, having something for the remaining open source projects is welcome.