The digital revolution has reached every corner of the world through smartphones. E-commerce is the byproduct of this digital age and has greatly advanced through the onset of smartphones. Every e-commerce company, be it big or small, is considering or has already launched a custom app for their enterprise. 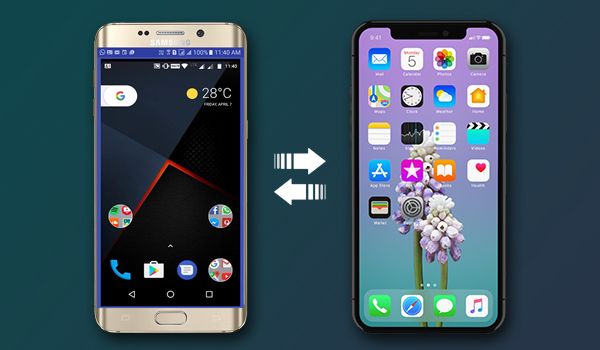 The problem starts when a business owner realizes the need for creating a clone of the Android app for the iOS platform or vice versa. As both the platforms have their own unique interface, there are several points that need to be kept in mind to ensure that the app's architecture remains intact while porting the application from one platform to another.

Due to the competitive rivalry between both the platforms as well as completely different platform structures, there is no button that can be simply clicked to convert mobile apps. Both the operating systems have completely different user interfaces, so when one plans to convert an app from one OS to another, one needs to keep in mind the factors listed below.

When the app is being converted to iOS from Android or vice versa, the crucial part is to consider the minimum Android or iOS version to be supported by your application. When you need an identical application on a different platform, you have to make sure that both the OS versions of the app look similar yet are highly functional to offer a better user experience. Determine the lowest OS version that the app should support and build the app architecture accordingly. With the Android P beta already released, one can choose Android 4.4 (KitKat) to be the lowest Android version to get more than 90% coverage. In case of iOS, most users have switched to iOS 10, so choosing it as the lowest iOS version would suffice.

This is where the platforms differ greatly. Navigating an application is drastically different in iOS than in Android. Android devices have 3 buttons: Home button, Back button, and Multitasking button, while in the case of iPhones, there is just one main home button. This significantly impacts the process of porting an application. If you want to go to the previous screen in an Android app, you use the back button, but as this button is absent in iOS, there has to be another way implemented. Mostly, iOS apps have vertical as well as horizontal elements, while Android apps are more vertical. So, while designing the clone counterpart of the app on another platform, one needs to make sure that these elements are taken care of. 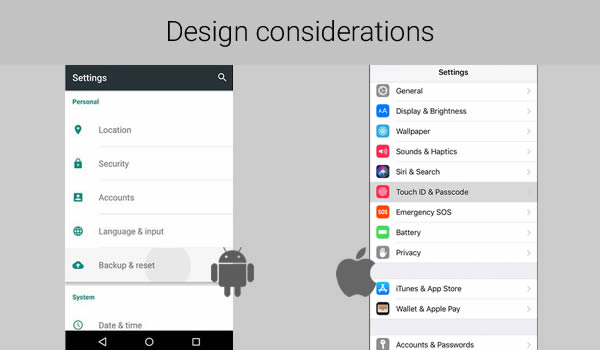 The user interfaces of Android and iOS are as different as two different universes that do not overlap. This means that one cannot just reuse the interface of the Android app for iOS or vice versa. Also, Android and iOS users are accustomed to the interface of their respective OSes and it is advisable to stick to that while designing an app to avoid alienating users. To state it in technical terms, iOS apps follow Flat design concepts and Android apps follow Material design concepts.

Here is a list of all the elements that need design considerations:

There are several other minor aspects of controls, action sheets, checkboxes, etc. In short, one needs to reconstruct the complete app interface right from the scratch while porting the application from one platform to another. 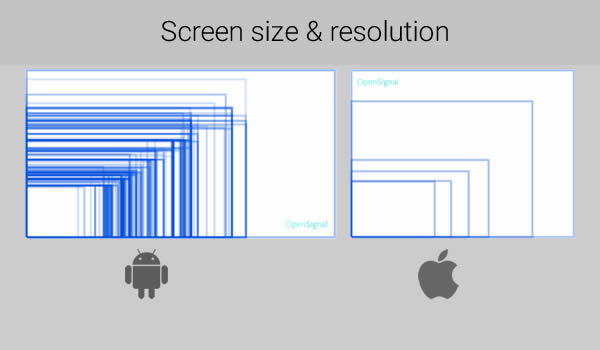 In case of Android devices, there are several screen sizes and resolutions available while in case of iOS, there is comparatively lesser variation in device screen sizes. So, while porting an app from Android to iOS, developers will have less trouble but while doing the reverse, i.e. porting an iOS app to Android, there are several screen resolutions to take into consideration. The responsiveness of the app has to be high.

If an app is using third-party frameworks or libraries, all those elements need to be compatible with both iOS as well as Android and if not, one needs to look for similar compatible libraries or frameworks that can replace it. While porting an app from Android to iOS or the other way around, one has to first test the compatibility of all these third-party libraries and frameworks.

Nowadays, mobile app developers are releasing libraries supporting both operating systems and that has made basic functionalities easy to replicate.

Though iOS and Android platforms are capable of working in C code, today’s iOS apps are mostly developed with Swift language, while Android apps use Java and Kotlin as these languages help mobile app developers add better functionality to apps. Porting from one platform to another cannot be done through just simple recompilation process. The duration of the complete porting process depends on factors like the app complexity, architecture, libraries used, etc.