Instead of creating a new project from scratch, often it is simpler to copy an existing Eclipse CDT project, then change it and work from there. To copy-paste a project in Eclipse:

However, to make that process simpler, a few things have to be done right in the ‘source’ project first.

I’m using the ‘copy-paste’ project in my classes too, where students get a ‘master’ project they can use as a base — multiple times during the labs if necessary.

Usually, I avoid linked files and folders, as they easily can be a source of problems. If using links, then make them project-relative, but this means that the copied project needs to match this, or the linked location needs to be updated.

With the copied project getting a new name, make sure that the build output (artifact name) is not a hardcoded one. Use

The compiler/assembler/linker needs some path and file information. Do *not* use absolute paths like “C:\myProjects\…”. Instead, use the the Eclipse CDT project variable ${ProjDirPath} and have paths surrounded by double quotes (if your project is named ‘Copy of MyProject’ or similar). 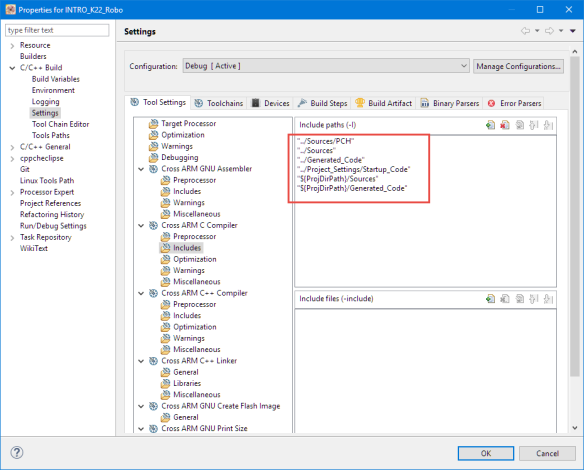 The ‘current directory’ of the build tools (at least for the GNU ARM Eclipse integration) is the build directory location: 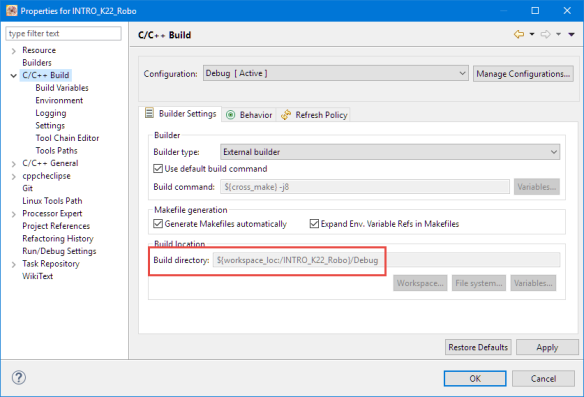 Using “../Sources” not only makes things relative to the project, it shortens the command line length which avoids a common length problem (see Solving the 8192 Character Command Line Limit on Windows).

Oh, and if you have not noticed: I’m using the ‘Linux’ forward slashes in the paths:

instead of “..\Sources”, that way I keep things compatible between Windows and Linux/Mac :-).

As with the copy we got all the build things from the earlier project, it is a good idea to make a Project > Clean to get rid of that old stuff:

Now build the project, and it should (hopefully) build just fine.

Now, this is the most complicated part.

Now they get copied, but having the old names (remember: Eclipse just does the copying, it has no clue about the content): 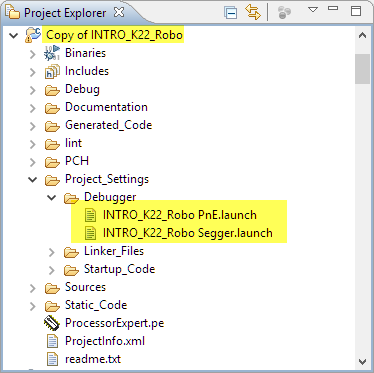 So one obvious step would be to rename the files matching the new project name. It is optional because Eclipse CDT only cares about the .launch file extension to recognize something as a debug launch configuration. However, if the ‘old’ and ‘copied’ project are still present in the workspace, renaming avoids confusion.

The new configurations show up, but they have the wrong project name and application file listed:

An easy way is to change them in the above dialog. Another way is to use a text editor or script file to change the following string attribute keys in the launch file:

With following a few basic things, a copy of an existing Eclipse CDT project is not that hard. Make sure you are not using linked files and folders, that the build artifact and path names are not hard-coded, and things should be much easier. While I have used the NXP Kinetis Design Studio in above screenshots, things are very similar to other Eclipse distributions, too.