Over the last few years, discussions about building the right kind of solution for Internet-based applications often come up with a comparison between Monolithic applications and Microservices. Building the perfect solution and tooling around virtualization and clouds have accelerated the adoption of the cloud-based technologies. Some examples :

With the launch of Amazon Web Services (AWS) in 2006, we can get compute resources on demand from the web or the command-line interface.

With the launch of Heroku in 2007, we can deploy a locally-built application in the cloud with just a couple of commands.

With the launch of Vagrant in 2010, we can easily create reproducible development environments.

With tools like the ones above in hand, software engineers and architects started to move away from large monolith applications, in which an entire application is managed via one code-base. Having one code-base makes the application difficult to manage and scale.

Over the years, with different experiments, we evolved towards a new approach, in which a single application is deployed and managed via a small set of services. Each service runs its own process and communicates with other services via lightweight mechanisms like REST APIs. Each of these services is independently deployed and managed.

Let's go into the details: 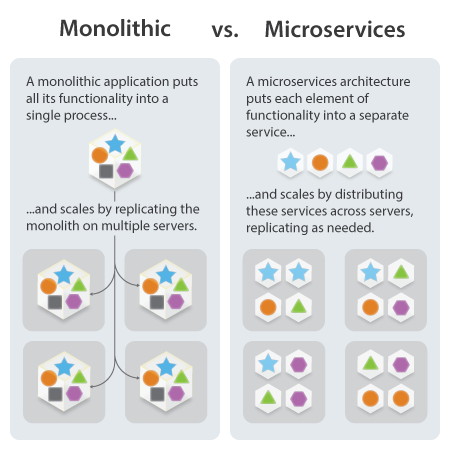 Monolith is a technical term used to identify a particular type of application. A monolithic application has all of its components residing together as one unit. A web application is a software program running on a web server. An application consists of three main components, user interface(UI), database, and server.

The monolithic application contains all three of these components and is written and released as a single unit. Internally, the codebase might be modular, but the components are all deployed together and are only designed to work within that same application.

Let’s go back to the dawn of “internet” time, which was somewhere around 1995. At this time, you may have found yourself hoarding AOL CDs in order to connect to the internet, check your email, and for making crafts. As the years moved on and the internet evolved, the AOL CDs you were hoarding only became good for making crafts. The AOL CD contained an application, and that application was a monolith. It was a self-containing piece of software that was able to run independently on its own. In order to upgrade the version of AOL, you had to obtain a completely new CD and replace the program. This is how a monolith handles its software release cycle (the process of which an application is upgraded or modified) - the entire program must be replaced, and this is also how the first web applications were designed.

Fast forward to now and the purchase of a brand-new computer. This computer is preloaded with all sorts of great software and, upon connecting to the internet, you spend the first hour downloading and installing updates to that software. This software being updated is no longer a monolithic application, because parts of it can be updated piece by piece. This is an example of how the application changed from the days of the AOL CD.

Individual parts of the application need to be divided into their independent functions. They also need to be able to connect with each other. Each of these small services (or microservices, as they became known) are small applications which contain well-defined pieces of what was once a monolith.

To work together, services will need to talk to each other. The rules for interaction between components are called an Application Programmer Interface, or API for short.

With monoliths, the various pieces of the application typically share a single database. Microservices normally do not share databases. Each microservice is responsible for its own storage. Communication between microservices is done via the API, rather than through a shared database.

Having a separate database for each service ensures loose coupling, which allows each service to fit together well. With this separation, you may decide some services need different databases than others.

Applications which have been divided across multiple services (and thus multiple servers) are called distributed systems. Some services are visible to the user, while others are only used internally by other services. The latter are called back-end services.

Just like any other technology, there are also challenges and disadvantages to using microservices:

Both the development and delivery of web applications have changed over the last twenty years. To deliver modern web applications, developers are delivering to the cloud. And that requires what is called a cloud-native approach. All that means is that the system will be split into many parts, then distributed to multiple pieces, and communicated over the internet.