Recently, we looked at our database of thousands of projects and found the top 10 errors in PHP apps. We’re going to show you what causes them and how to prevent them. Avoiding these "gotchas" will make you a better developer.

Because data is king, we collected, analyzed, and ranked the top 10 PHP errors. Rollbar collects all the errors for each project and summarizes how many times each one occurred. We do this by grouping errors according to their fingerprints. We group two errors if the second one is just a repeat of the first. This gives users an excellent overview instead of an overwhelming big dump like you’d see in a log file.

We focused on the number of projects experiencing an error because we wanted to see the errors that affect the most developers in different companies. If we looked only at the number of times each error occurred, high-volume customers could overwhelm the data set with errors that are not relevant to most readers. The errors below are the ones most likely to affect you and your company. 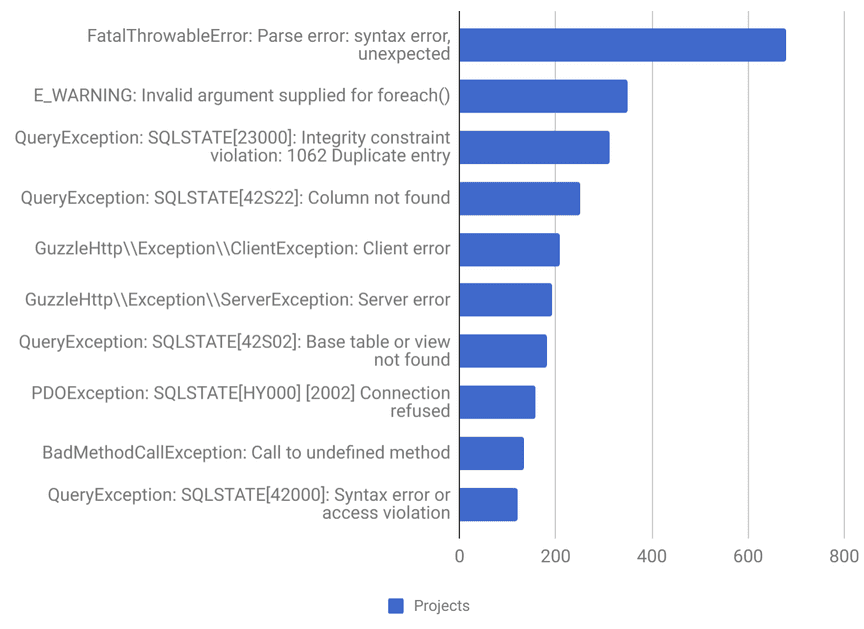 We'll describe each error in more detail starting with the most common. At the end, we'll share best practices to avoid shipping them to production.

A parse error occurs when code that contains a syntax error is executed. Syntax errors needn’t be large, nor complicated, as the following example demonstrates.

The code will throw "PHP Parse error: syntax error, unexpected end of file because it is missing a semicolon at the end of the statement. The example below will execute successfully.

Introduced in PHP 4, the PHP foreach construct provides an easy way to iterate over arrays and iterable objects, such as those that implement the \Traversableinterface. Try to use it on a variable with a different data type or an uninitialized variable. It will issue an error, such as in the example below.

The above code throws a warning with the message "Invalid argument supplied for foreach()”, because $y_exceptions is not an array nor does it implement ArrayAccess, \Traversable, or any of the other iterable interfaces.

The exception occurs when our code attempts to perform a SQL operation which would violate an integrity constraint, based on the database schema. This error could be caused for a number of reasons, including attempting to insert a duplicate primary key value into the table, or not providing values for one or more required columns.

In the above example testtable has a column user_name with the primary key constraint. We are trying to insert duplicate value in the user_name column.

Another exception may occur when your code attempts to operate on an undefined column. The following example demonstrates this.

In this case, it is throwing a "Column not found" exception because we are trying to insert a value into testtable’s password column, which does not exist.

Guzzle is a PHP library that makes it trivial to create HTTP clients for sending HTTP requests and integrating with web services. If errors occur during a transfer attempt, it will throw an exception. Specifically, it will throw a GuzzleHttp ClientException to handle HTTP 400 errors, if the http_errors request option is set to true.

The example throws the client exception "Client error: GET https://httpbin.org/status/404 which resulted in a 404 NOT FOUND response."

The root cause of such types of errors may be the following:

They can be handled using a try catch block. The example below shows how to do so.

You can see that the code’s wrapped in a try/catch block, which will catch any ClientException’s that are thrown. You could extend this example to catch other, more specific extensions, such as the ones mentioned above.

Here is another kind of exception that can be thrown by Guzzle. A ServerException is thrown when HTTP 500 errors are encountered, if the http_errors request option is set to true.

The above example throws the client exception "Server error: GET https://httpbin.org/status/503 resulting in a 503 SERVICE UNAVAILABLE response," because the service is not available.

The root cause of such errors may be any of the following:

The ServerException can also be handled by using a try/catch block, as in the example below.

As in the previous example, which caught a ClientException, this example will catch any thrown ServerExceptions that result from the call to the $client’s request method.

The query exception, "Base table or view not found," can be thrown when your code attempted to operate on a database table that does not exist, or (for some reason) could not be found. Have a look at the following example.

In my case it is throwing, "SQLSTATE[42S02]: Base table or view not found: 1146 Table" because we are trying to insert data into a table that does not exist in the database. Make sure the table is present first, to avoid these kinds of exceptions. Alternatively, as in the previous two examples, wrap the call to insert in a try/catch block, which will catch the QueryException, as in the following example.

PDOExceptions represent errors raised by PDO (PHP Data Objects) which, as the PHP manual describes, are "a lightweight, consistent interface for accessing databases in PHP."

The possible root causes of a "PDOException: Connection refused" may be one of the following:

In PHP, the "BadMethodCallException: Call to undefined method" error occurs when you are trying to call an undefined method of a class. Have a look at the example below.

The above code will throw "BadMethodCallException: Call to undefined method" because we are attempting to call the all method which does not exist in the Card class (yet). To avoid this kind of exception make sure the called method is defined in the class. Alternatively, you could implement the __callmagic method to handle calls to undefined methods. However, this approach may get messy.

Another best practice is to use unit and integration testing tools, such as PHPUnit, Codeception, Behat, and Selenium. These can help you prevent shipping code to production (assuming you are deploying correctly), that contains errors.

Some errors like HTTP server errors are not completely avoidable. However, a well-written application will handle them gracefully, such as by catching them and showing an error message to the user.

We hope that you learned something new and are better placed to avoid errors in the future. We also hope that this guide helped you solve a head scratcher that you’ve been struggling with.

If you haven’t already, sign up for a 14-day free trial of Rollbar and stop flying blind in production.