mobile is now regarded as the most explosive source of revenue growth, employee productivity improvement, and customer engagement. gigaom research reports that mobile users represented 40 percent of ebay’s 36 million new users in 2013, accounting for $35 billion in enabled commerce volume (ecv) — an astounding increase of 88 percent over the prior year.

however, mobile engagement is a very tricky one. because the mobile user is so focused on the mobile app while interacting with it, it is an intense interaction over a rather small screen. with so many alternative choices at their fingertips, the user has almost no tolerance towards ill-designed or poorly performing mobile applications. the last i heard the itunes app store has 1.2 million apps. for the android user, there are about 1.3 million apps to try from. loyalty needs to be earned, and cannot be taken for granted. plus, a lot of your brand value and revenue/cost savings are at stake.

it is not as hopeless as it sounds, however. remember, mobile users are also known for rewarding a great experience; it took the angry birds app only 35 days to reach 50 million users! the total franchise value including merchandise, etc. had exploded to a few billion dollars at their peak. mobile is a high velocity market. the first mover’s advantage is tremendous, and you need to take charge of your experience with the right mobile application performance monitoring (mapm or mobile apm) tools at hand.

there is a lot of confusion in the market today. so in this blog post, i’d like to dispel some key myths around mobile apps. and how, with the right mapm tool, you can nail your mobile app experience — both interactivity-wise and performance-wise — and thereby win the market.

myth #1: unforgiving app ratings on the app store are an unfortunate reality

there is no such thing as bug-free code. any sufficiently complex code will have bugs, and so will your mobile app. your users understand this reality but are looking for well thought-out designs that have fewer performance and crash issues. customers are also amenable to quick fixes and are willing to give chances to organizations that are responsive to bugs, performance issues, and crashing issues. the critical success factor here is the turnaround time.

in order to avoid brutal app ratings, you need to a ship a good product, but more importantly show you are willing to respond to your user problems and fix them promptly. use state of the art crash analytics and network request analytics to understand how your app is performing. the ideal mapm tool should show the crashes and their stack traces in near real-time as they happen. for fastest response time, the mapm tool should group these crashes based on common patterns and uniqueness. the same mapm tool should also provide network request latencies at group levels as well as individual request levels. resolution of information should not be lost when troubleshooting performance and crash issues.

myth #2: backend services are black boxes of performance bottlenecks and i should just give up on them

i keep observing the finger pointing between mobile developers and the it ops teams. those mobile developers who use mobile-only apm tools have visibility only till the point where a network request is made from the mobile app. anything beyond is pretty much a black box which is usually the main cause for performance delays and mobile app’s poor response time. for the lack of better information, the mobile developer is quick to blame the back end service. on the other hand, the it ops team that has invested in legacy apm solutions that are unable to distinguish mobile-originating transactions from the others. they often struggle to isolate the mobile transaction delays caused by their services and get defensive.

a modern end-to-end apm solution that delivers context-awareness for transactions originating from mobile devices all the way to the backend database or even storage would completely take away the guesswork in performance troubleshooting. and if the entire infrastructure can be managed with a single pane of glass, there will be no information lost in translation and the mobile dev and it ops team can collaborate to focus on nailing down the end-user experience rather than play the blame game. 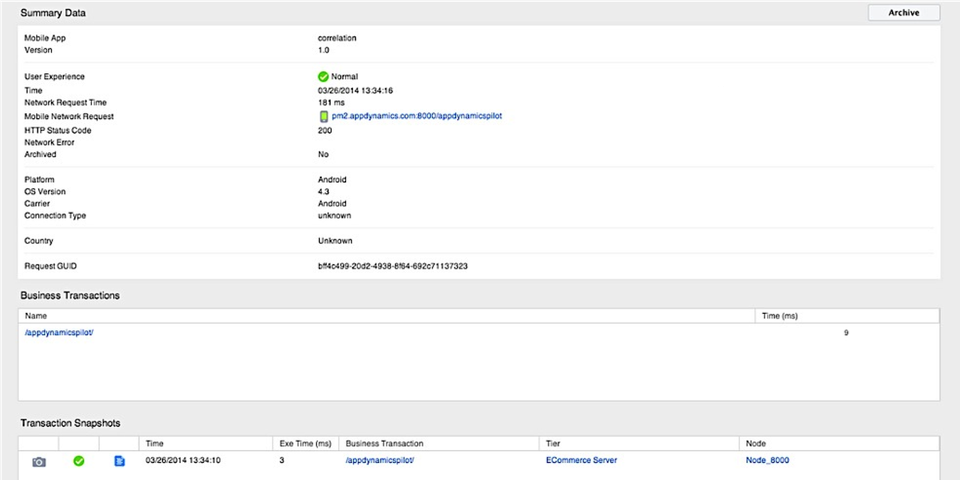 this is the most critical requirement we hear from our customers time and again.

stay tuned for the next installment of the series where i’ll cover myths 3-5: