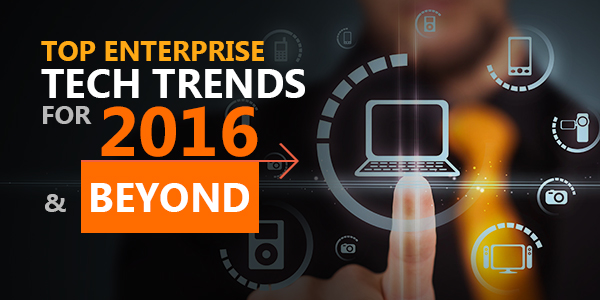 2015 was indeed an eventful year for the tech world as innovations in enterprise tech touched new heights - be it mobile or web. More so, cloud infrastructure has become more scalable for running applications composed of micro services equipped with RESTful APIs. The advantages of these services for developers is that they run in containers, which give them more control than ever in building, testing, and deploying applications.

Here is a consolidated report of the biggest technology achievements of 2015 and how its will shape the enterprise tech trends of 2016:

Hybrid Cloud to Get Real

Until now, there is a confusion on the use of the phrase “hybrid cloud”. While some use it to refer to integration between on-premises infrastructure and the public cloud, some consider it as an integration of any two clouds. So, if, in case you require a private cloud setup like a public cloud (even though a few of the former exist), the hybrid cloud might as well be just a fairytale.

For instance, while Amazon lacks a hybrid play, including Google that doesn’t have a hybrid play either - Microsoft is bringing in the revolution with its Azure Stack for Windows Server, which enables customers to at least partially duplicate Azure public cloud infrastructure locally. The industry is optimistic that when Windows Server and System Center 2016 ship this year, a true hybrid IaaS environment can be yielded on integration with Azure.

Shape the Future With ‘Cloud Native'

It is a known fact that apps built from micro services running in containers have all sorts of edges over monolithic applications. Most importantly, instead of dealing with vague internal dependencies that make troubleshooting and updating agonizing, it helps you work with decoupled services that are exclusively supervised and managed.

However, at the same time, microservices architecture augments complications mainly when it comes to swarms of containers that has to be kept track of. For instance, in 2015 Google had introduced the open-source Kubernetes project that distils Google’s container management system into open source bits - thereby allowing mere mortals to squabble clusters of containers at scale.

Major clouds now not only offer analytics as a service, they also provide machine learning APIs in the cloud, along with open source machine learning tools. In fact, pervasive machine learning capability empowers developers to build apps that recognize patterns in piles of data -- for medical diagnoses, Web ad-serving, fraud detection, face recognition, and infrastructure optimization, to name a few.

Unlike machine-learning features used by some commercial software and websites, the ones developers harness nowadays is broken out as a separate capability. In fact, developers now have tons of data and cloud computing capacity to pitch at it - that includes elegant new servers equipped with GPU accelerators to run machine learning algorithms.

One of the best things to happen to big data in 2015 is that Spark shoved off Hadoop from the spotlight. The reason being Spark unlike Hadoop which carries out data processing in big batches across many disks does so with small batches in big memory.

This makes the processing close enough to real time to be indistinguishable from streaming - inspiring tech giants like Cloudera and IBM to go all-in with Spark, while Google, Amazon, and Microsoft offer Spark as a service in their public clouds. However, Spark does have its set of limitations, mainly when it comes to memory management and resiliency, which it hopes to resolve in 2016.

You all are aware that the first generation of PaaS was engulfed by arbitrary limitations, resulting in enterprise PaaS adoption that has been relatively weak. Even though lots has happened recently, including a gale to support Docker by the two leading on-premises PaaS offerings, Cloud Foundry, and OpenShift, it is still believed that many enterprises can take the advantage of running PaaS as a contemporary, scale-out, polyglot version of the good old application server.

Cisco’s Application Centric Infrastructure to Give SDN a Boost

Most of you are aware that software-defined networking (SDN) is all about hardware switches eventually becoming commoditized. Even though SDN adoption has largely been confined to telecommunication and cloud service providers that have had little impact on the enterprise, Cisco sees SDN as an existential threat.

However, Cisco has gone ahead and presented a new SDN scheme dubbed Application Centric Infrastructure (ACI) that comprises of a new operations control protocol. Designed for large-scale deployments, ACI drives SDN in a new direction, distributing some of the control over configuration to the network; and this besides giving admins the ability to adjust settings at a high level based on application requirements.

You all know about Bitcoin, but do you know Blockchain, the mathematical magic behind bitcoin? Well, it is on the verge of becoming a viable way to ensure the integrity of all kinds of transactions. As such, ways are explored as to extend Blockchain for trading platforms, ID cards, contracts, secure storage, and more. Not to forget, even banks are testing it out - a strong indication of the fact that blockchain is all set to go mainstream in 2016.