If we were playing the children’s game Top Trumps with Java interface definitions I think that I’d win every time. That’s because I’ve just found an interface, which is part of a prestigious company’s public API with with 167 methods. Trump that! Imagine, if the interface definition contains 167 methods, how big is the implementation class? In the words of a texting teenager “OMG”.

You’ll probably know that objects that are as out of control as this are usually called God Objects or Monster Objects and there’s an anti-pattern of the same name which explains it all. If you look on at various definitions of the God Object Anti-Pattern, they usually say a god object is an object that “knows too much or does too much”1, words which seem to crop up all too often if you dig around the internet. In modern programming speak this generally means that a god object: 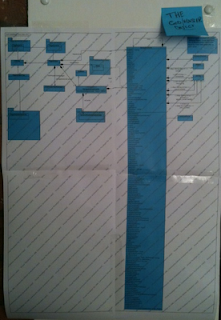 These types of objects are not that uncommon (though I haven’t seen too many until recently and none as bad as this one) and it makes you wonder, how does such a mess arise? It’s surely easier to do a good job than to make a complete mess. So, I tried to come up with some of the excuses that the professional company in question might give for creating a God Object of such magnitude:
If you need the formal explanation of the God Object Anti-Pattern see Wikipedia, whilst for something more light hearted see Decaying Code.

The question is: how do you go about fixing such a mess and the standard answer is to apply the single responsibility principle, creating groups of methods that are responsible for individual bits of functionality. These should then be removed from the god object one at a time and implemented as objects in their own right.

But, and in this case there’s a BIG BUT, what if you can’t refactor? The interface has above has nothing to do with me, it’s not my code2 and I don’t have access to its source code. The answer is to apply the same idea, splitting the monster class’s methods up in to functional groups, but then writing a set of Adaptors (aka Delegate and Wrapper) classes one for each functional area. 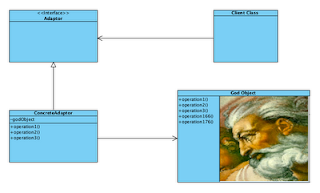 The rough UML diagram above demonstrates the solution to my particular problem, though it should be remembered that with 167 methods there will be lots of adaptor classes, each with proper documentation and unit tests... all of which leaves me with that nagging feeling of “can I be bothered”, after all, Facebook is calling...

1Wikipedia
2I’d be hugely ashamed if it was...