Note from DZone: This article is generating a lot of discussion in the comments thread, so be sure to check those out when you're done with the article!

While doing code review, I have seen many times that there is a potential danger of creating a lot of inherited classes, meaning a simple change in business requirements may make things unmanageable. So, surely, this is a serious code smell, and we must take action.

If criteria are interlinked, the outcome product can be any combination of those criteria.

So here, the two main criteria would be:

1.  A ball can be decorated with (Glow-in-the-Dark properties, a Smiley, Scented properties, etc.)

2. It can have any combination of the above properties like (a Disco-Light Smiley ball, a Smiley Sandalwood Scented ball, a Glow-in-the-Dark Rosy Scented ball, etc.)

According to the requirements, we would try to solve the problem by creating interfaces for each decoration:

The design seems to be right to the naked eye, as it maintains the "coding to an interface" principle and welcomes the future changes as well!

Take a look at the picture below for reference. 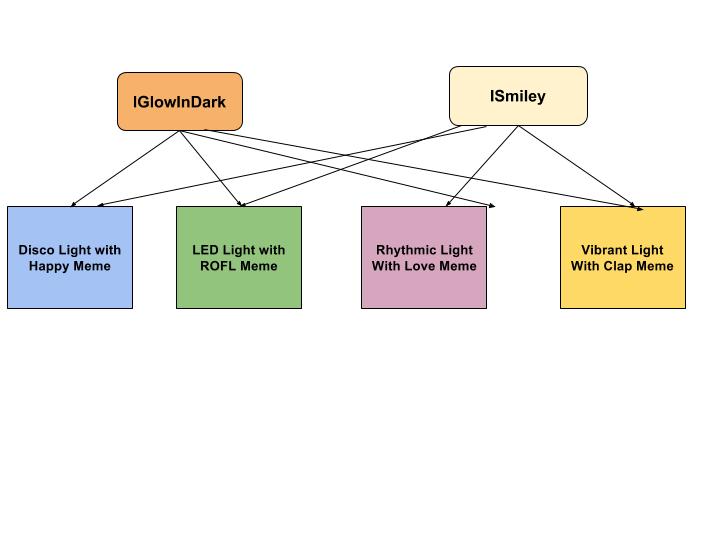 It seems to be right, but is it well designed? Put your thinking cap on, before reading the next part of the article.

In my opinion, most of the time this would not be considered a good design for this application. So, let me explain my reasoning...

This design handles decorations very poorly. Why? Well, let's say we have n number of decorators (Glow-in-the-dark, Smiley, Scented, etc.) each has m number of implentations. So, there will be Cn(C(m)) possible combinations.

When n and m is small, there is a relatively small number of combinations. But what if n and m is a large number? How many combinations are there then?

This is a massive failure of our chosen design. Our codebase will be large and unmanageable. Somehow, we need to deal with the combination problem—we need to change our design.

GOF to the Rescue

Can you guess which GOF patterns will rescue us?

If you guessed Decorator then congratulations, you are correct! This pattern will rescue us from this scenario. But before we get to Decorator, let's discuss why our previous design fails. (Quick Note: There are many other solutions we could use to get rid of this problem, and I plan talk about these solutions in later tutorials.)

If we read the requirements minutely, we would understand that the complexity lies in creating the many different combinations of the decorators of the ball. Through inheritance, one concrete class describes only one possible combination, as its implements either or all (IGlowinthedark and ISmiley or IScent) so it is static in nature.

It is like printing 1,000 array elements manually without using any loop.

To solve this riddle we are searching for a way to create a dynamic combination to expel the Inheritance Forest. So, all problems boil down to the following question: How can we push combination/behavior runtime dynamically?

The intent of the Decorator pattern is to add responsibility/behavior at runtime to an Object. That's exactly the answer we're searching for.

How the Decorator Works

In the Decorator pattern, we encapsulate the main/core object inside a wrapper interface. In this case, the main Object is Ball and the interface is IBall. Now, every responsibility/behavior/criteria also implements the same Interface IBall. In our case, Glow-in-the-Dark, DiscoLight, ROFL Smiley, Rosy Scent implement IBall as well. And we have a composition with the same interface (IBall), which acts as a Wrapper Object.

Through this technique, we can achieve two things:

Let see a diagram of our Decorator: 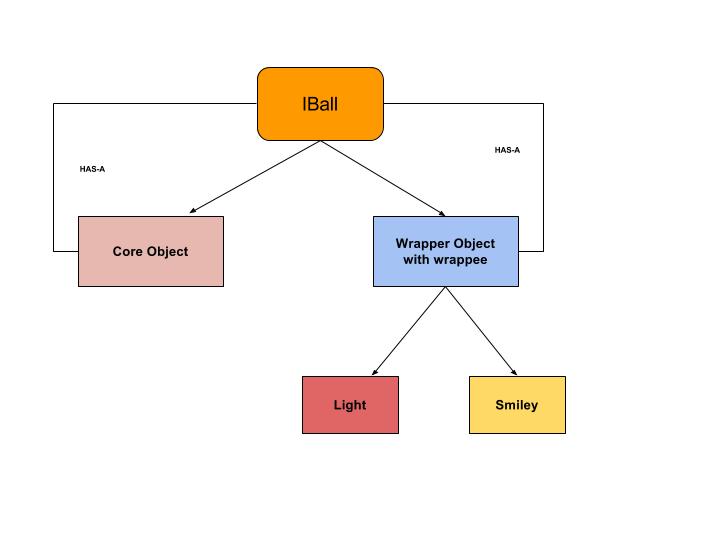 Enough theory — now see how to achieve the desired runtime behaviors through a Decorator pattern:

Now we create the core component, which is the base. On top of it, we will add behavior as a wrapper Object:

Now, we will create decorator components, like Glowing Ball, Smiley (DiscoLight, LED Light, Happy Meme, etc.) so we can create any combination with them:

Now we will create multiple combinations on the fly, as each component implements the IBall interface, and expect an IBall interface as an argument of a constructor so we can pass any components into any other component.