Microservices give us as developers an incredible amount of freedom. We can choose our language and decide where and when to deploy our service. One of the biggest challenges with microservices, though, is figuring out how things go wrong. With microservices, we can build large, distributed applications, but that also means finding what goes wrong is challenging. It’s even harder to trace errors when you use a platform like AWS Lambda.

As good developers, we write our unit tests and integration tests, and we make sure those tests all pass. Together, with the Quality Assurance team, we write complex test scenarios to make sure our code behaves the way we intended. The one thing, though, we can never predict is how our end-users will use the software. There are always new issues we didn’t think would happen. That is why application monitoring tools like Sentry.io are useful. Those events can be errors, but they can also be other types of events.

As applications grow and become more complex, the time it takes to figure out where things go wrong increases too. As you rearchitect apps to be event-driven and make use of serverless compute, that complexity will increase even further. One of the apps we built to help showcase the things we work on as a team is the ACME Fitness Shop. The ACME Fitness Shop consists of six microservices, all running in their own containers and using their own data stores. 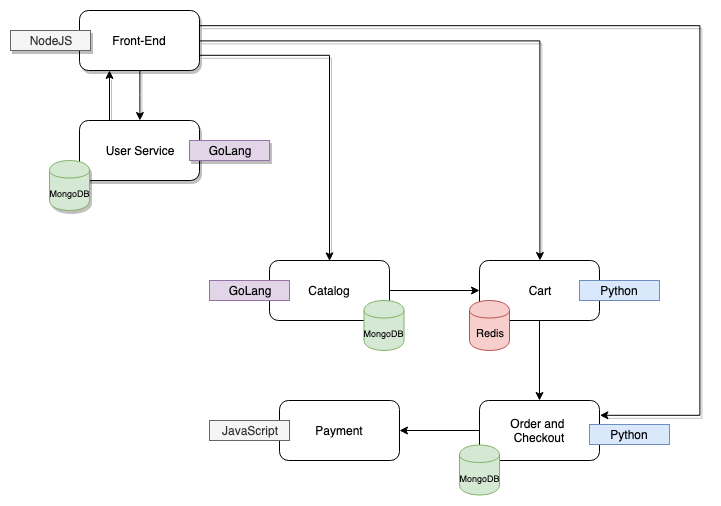 Over the past months, the CloudJourney.io team has worked on a serverless version of the ACME Fitness Shop. Currently, the serverless version has 24 Lambda functions that work together. Keeping track of what they all do and where things fall apart is tough. Rather than having a single container that does all the “cart stuff”, there are now eight different Lambda functions.

The Lambda functions in the above diagram do the same as their container-based counterparts in the first image. In fact, you could swap the container-based services with the serverless services and never really know the difference.

While we can have different teams working on different parts of the same group of functionality, we did add a bit of complexity when it comes to troubleshooting and finding errors. Especially with serverless, you can’t open up a terminal session and “_ssh into a container_”.

The tool that we chose for error monitoring for this project was Sentry.io. To connect to Sentry, the only required value is the client key, which Sentry calls the DSN. To keep that value secure, and definitely follow best practices, you can store it in the AWS Systems Manager Parameter Store (SSM) and use it while deploying your app using CloudFormation (or SAM).

Most serverless platforms will close all network connections as soon as the function is completed and won’t wait for confirmation. To make sure that all events are received by Sentry, you can configure a synchronous HTTP transport. Together with a few additional settings, the connection to Sentry is configured as:

Sentry offers a bunch of useful events that you can send to help understand what goes on in your app:

This is an error you will find during your unit and integration tests, but since it highly impacts your user experience, you likely want to keep track of it during production too.

The opposite is possible as well. If you want to capture successful invocations of your app, you can do that too. In this particular case, I’d say the invocation was a success when the credit card was successfully validated, and the message was successfully sent to where it needed to go (in this case an SQS queue). With a single statement, you can send an event to Sentry that captures the success of the Lambda function.

In both cases, keeping track of additional data is important. That additional data could mean the difference between spending two minutes looking at a single service or spending the entire day figuring out which services were impacted. The breadcrumbs play an essential role here. The amount, the order number, and the generated transaction ID are useful in this context. 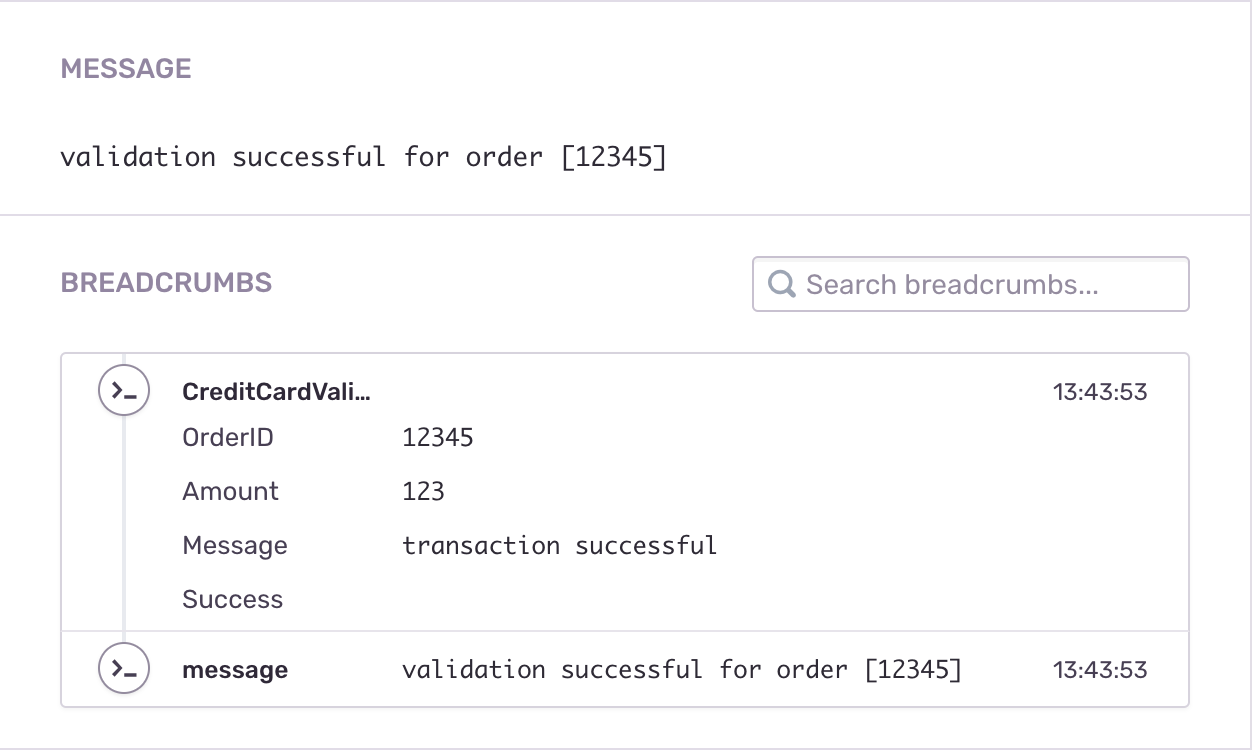 Until now, we’ve looked at the serverless components of the ACME Fitness Shop. As mentioned, there is a container version too, and you could mix and match parts. This is where tracing and knowing where errors occur is crucial.

Rather than just looking at logs in one place, you would need to look at both your serverless logs and Kubernetes logs. Within the Python-based cart service, we’ve added the Redis integration too. Simply adding a single line and an import statement, makes sure that all the Redis commands that are executed show up too.

Rather than spending time figuring out where the issue is and how certain data got translated into a Redis command, you can literally just read what happened. 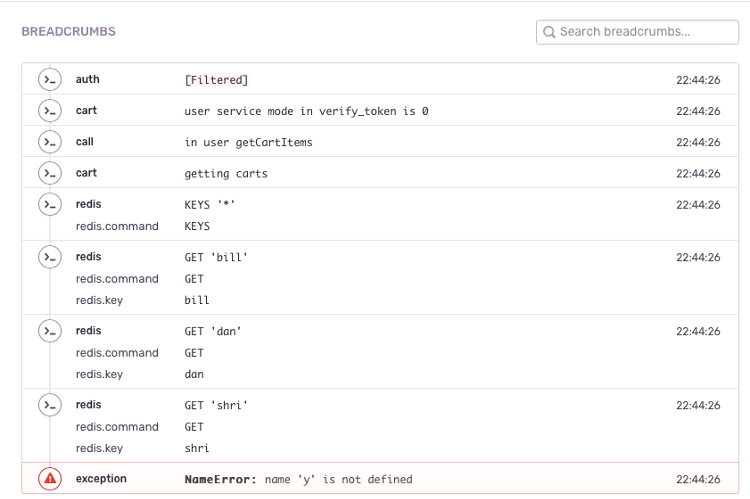 One of the tags we’ve set up is called “release”, which is the SHA of the git commit. Based on that, we can track the exact commit that’s running in any environment at any given time and see the events that have been captured. 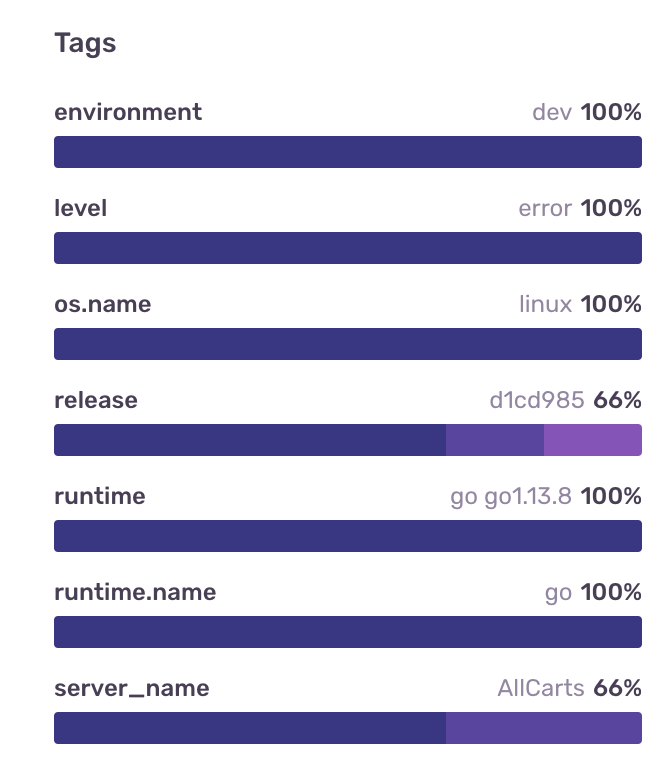 These tags, when tied to specific scopes, can even allow you to correlate messages together. That gives you the power to see what all went on in your system at the time an error occurred. Some examples, including tracing from the Nginx load balancer in front of your app, can be found in the Sentry docs.

The containers and Kubernetes manifests for the ACME Fitness Shop are on GitHub and so is the code for the ACME Serverless Fitness Shop. So, if you want to try it out and see whether Sentry.io adds value to your use cases as well, you can do exactly that using the code and apps we’ve already built. In the meanwhile, let us know your thoughts and send Bill, Leon, or the team a note on Twitter.

Published at DZone with permission of Leon Stigter . See the original article here.