Does this pattern sound familiar? :-). This article talks about how to troubleshoot these kinds of sudden CPU spikes.

This type of sudden CPU spike usually happens because of two reasons:

Let’s discuss them in detail.

How to Troubleshoot Repeated Full GCs? 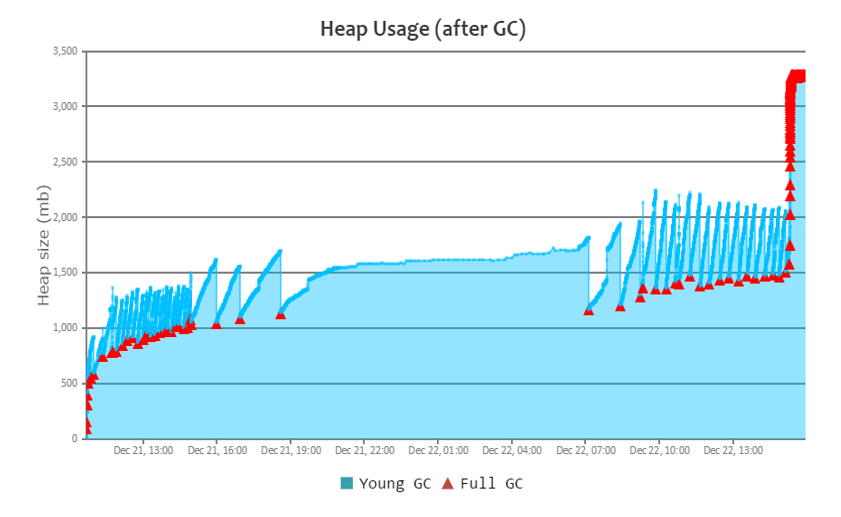 Fig 1: Report generated by http://gceasy.io/ - towards the right end, you can see Full GCs running repeatedly without memory getting reclaimed.

Above is the excerpt from the report generated by http://gceasy.io/. The tool correctly pointed out that the application is suffering from a memory leak (see the fire icon at the top). You can also notice towards the right end of the graph, Full GCs running repeatedly without memory being reclaimed. So the tool helped us to conclude that the application’s CPU spike was happening because Full GCs are running repeatedly.

As a next step we captured the heap dump from the JVM and analyzed it using Eclipse MAT. Analysis revealed that in a recent code deployment a static HashMap was introduced to the code. Objects were added to this HashMap for certain types of transactions. This HashMap kept growing and growing causing the memory leak. Once the HashMap was made a local variable (as supposed to a static variable) in the method, the problem got fixed.

When a thread loops infinitely in code the CPU will also start to spike up. (In a way, repeated Full GCs pattern is also a kind of infinite looping.) Consider the following code:

NOTE: If code within the while loop makes any external database calls or puts the thread to sleep or waits, then the CPU will not spike up because sleep or wait doesn’t consume CPU cycles. Only active executions will cause the CPU to spike up.

How to Troubleshoot Infinite Looping in the Code?

A major travel application started to experience this sudden CPU spike problem. All of a sudden a few of their JVMs started to consume high CPU. Even though traffic volume was low, it was still suffering from this problem. Even after removing the high-CPU-consuming JVMs from the load balancer (so that traffic wasn’t sent anymore), the CPU spike still continued. Only when JVM instances were recycled did the problem go away. But once JVMs were started, a few hours later CPU consumption started to spike up again.

We captured the thread dumps from the JVMs suffering from this CPU spike. We uploaded the captured thread dumps to the http://fastthread.io/ tool. In the tool there is a section called “Runnable Threads,” which reports all the threads that are in the RUNNABLE state in the same method or line(s) of code across all the 3 thread dumps, along with the line(s) of code in which it was looping. In this section, the tool accurately reported the infinitely looping threads. In fact, the tool even put the fire icon near the threads causing the CPU spike. See the Fig 2.

From the screenshot, you can see there are 9 threads: InvoiceGenratedQC-0LG-1, InvoiceGenratedQC-B85-9, InvoiceGenratedQC-H87-1 …. looping on the setConnectingFlight() method of ItinerarySegmentProcessor.java file in line #380. If you want to know the complete stack trace of those threads, you can click on the threads reported in this section (refer to Fig 3). 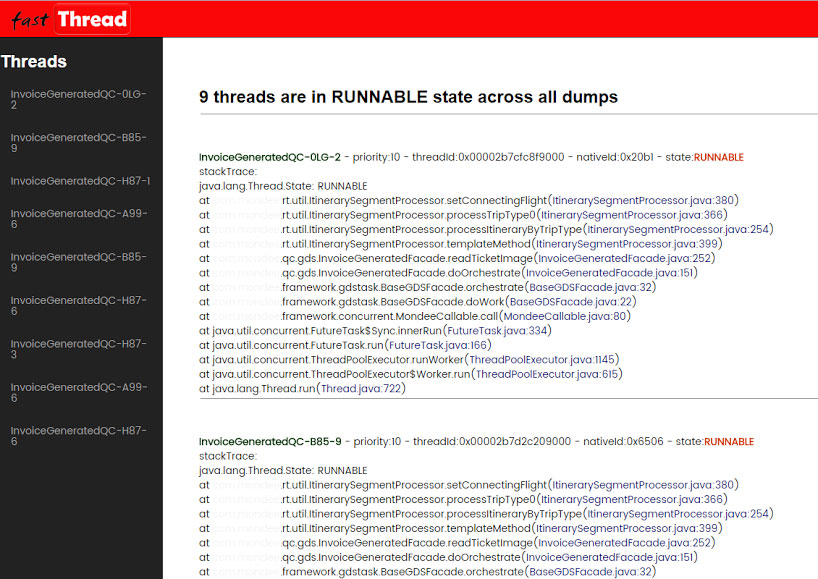 Below is the source code of the setConnectingFlight() method:

Basically the thread is looping infinitely on this while loop (which is the line #380):

If you notice the implementation, this code is trying to get the last connecting itinerary. Unfortunately because of the bug in the code tempcurrentItinerary, that object was built with a circular reference between the connecting itineraries in few scenarios. So the thread started to loop infinitely on the while clause. Once that circular reference between the itineraries was fixed, the problem was resolved.

Last note: Most of us know that HashMap is not a thread-safe data structure. But not everyone knows that when multiple threads access the HashMap’s get() and put() methods concurrently, it will result in infinite looping. This is another example of infinite looping thread, which will also cause CPU to spike.