In this article, we are going to discuss how we troubleshoot a CPU spike problem that surfaced in a major trading application in North America. All of a sudden, this application’s CPU started to spike up to 100%.

This application was running on Java, Tomcat technology stack. We requested Site Reliability Engineering (SRE) team to capture the following two artifacts from the machine where this problem was happening:

Let’s see what this artifact contains in this section.

This tool has a secret ‘-H’ option :-), which a lot of engineers aren’t familiar with. It can be invoked like this:

When the ‘top’ tool is invoked with this ‘-H’ option, it will start to display all the threads that are running within that particular process. It will also display the amount of CPU and memory consumed by each thread within that process. Below is the output we got from this trading application:

As you can see from the “top -H” output, there is a thread with id ‘11956’ in the first row. Just this thread alone is consuming 60.9% of the CPU. Bingo!! This is the first win. Now using this ‘top -H’ option, we have identified the thread which is consuming a high amount of CPU.

Our next challenge is to identify the lines of code that this ‘11956’ thread is executing. This is where thread dumps come handy. Thread dumps show all the threads that are running within the application and their code execution path (i.e. stack trace).

Best Practice: Capture at least 3 thread dumps, in a gap of 10 seconds between each thread dump.

This report contains the ‘CPU | Memory’ section. This is the section where the tool marries top -H output and thread dump and provides a CPU and memory consumed by each thread in the application. 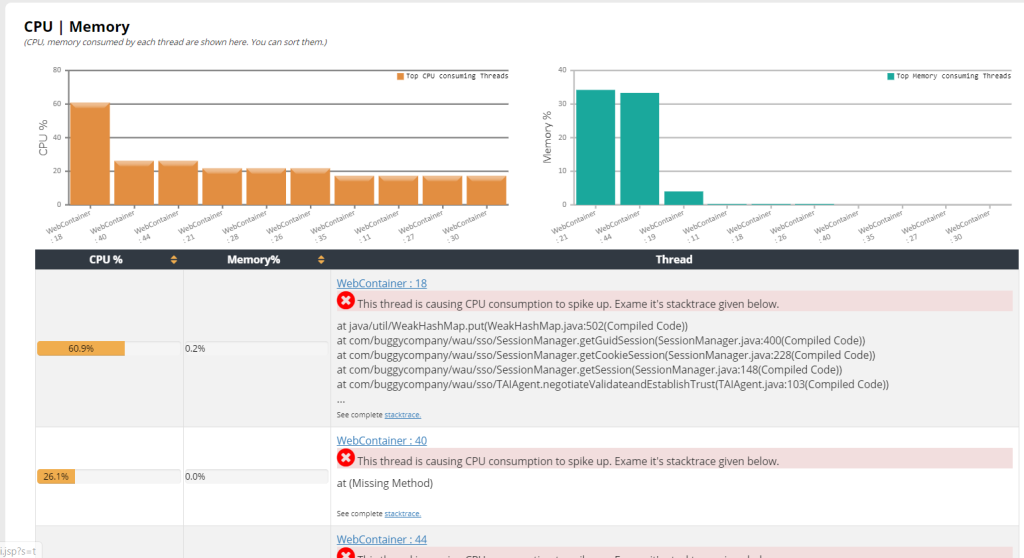 Fig: CPU, Memory consumed by each thread (generated by fastThread)

In the above screenshot, we can see the “WebContainer:18” thread in the first row reported to be consuming “60.9%” CPU. In the last column, you can see the code execution path (i.e. stack trace) of this thread. You can see the tool now reporting the thread name (i.e. ‘WebContainer:18’) and the code path that it was executing (which wasn’t available to us when we saw the raw top -H output).

You can notice that ‘WebContainer: 18’ thread was executing the java.util.WeakHashMap#put() line of code. For the folks, who aren’t aware, HashMap is not a thread-safe implementation. When multiple threads invoke HashMap’s get() and put() methods concurrently then it can result in infinite looping.

When thread loops infinitely CPU consumption will start to skyrocket. That’s the exact problem happening in this application. Once WeakHashMap was replaced with ConcurrentHashMap the problem got resolved.

We hope you find this simple technique useful.