I recently stumbled upon a tweet by Lars Richter who mentioned and linked to a REST client extension in VSCode. I had a more detailed look and was pretty impressed by this extension.

I can now get rid of Fiddler and Postman.

Let's Start at the Beginning

The REST Client Extension for VSCode was developed by Huachao Mao from China. You will find the extension on the visual studio marketplace or in the extensions explorer in VS Code:

If you follow this link, you will find really great documentation about the extension, how it works, and how to use it. This also means this post is pretty useless, except you want to read a quick overview ;-) 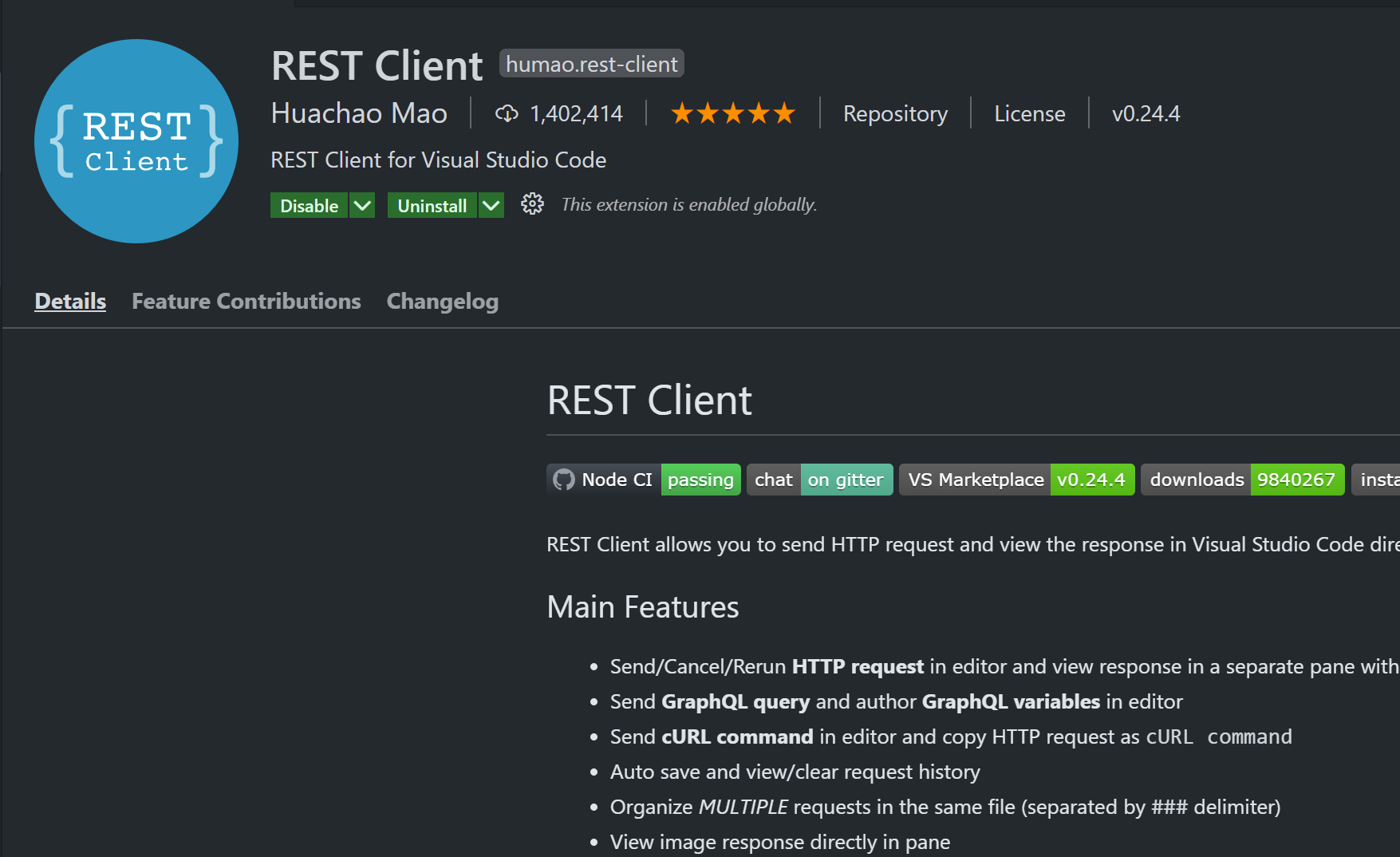 The source code of the REST Client extension is hosted on GitHub:

This extension is actively maintained, has almost one and a half installations and an awesome rating (5.0 out of 5) by more than 250 people

What Does it Solve?

Compared to Fiddler and Postman it is absolutely minimalistic. There is no overloaded and full-blown UI. While Fidler is completely overloaded but full of features, Postman's UI is nicer, easier, and more intuitive, but the REST Client doesn't need a UI at all, except the VSCode shell and a plain text editor.

Let's See How it Works

To test it out in a demo, let's create a new Web API project, change to the project directory, and open VSCode:

This project already contains a Web API controller. I'm going to use this for the first small test of the REST Client. I will create and use a more complex controller later in the blog post

To have the *.http files in one place I created an ApiTest folder and place a WeatherForecast.http in it. I'm not yet sure if it makes sense to put such files into the project, because these files won't go into production. I think, in a real-world project, I would place the files somewhere outside the actual project folder, but inside the source code repository. Let's keep it there for now:

I already put the following line into that file:

This is just a simple line of text in a plain text file with the file extension *.http but the REST Client extension does some cool magic with it while parsing it:

On the top border, you can see that the REST Client extension supports the navigation inside the file structure. This is cool. Above the line, it also adds a CodeLens actionable link to the configured request to send the request.

At first, start the project by pressing F5 or by using dotnet run in the shell.

If the project is running you can click the Send Request CodeLens link and see what happens.

I created another API controller that handles persons. The PersonController uses GenFu to create fake users. The Methods POST, PUT and DELETE don't really do anything but the controller is good to test no.

The Person model is simple:

If you now start the project you will see the new endpoints in the Swagger UI that is already configured in the Web API project. Call the following URL to see the Swagger UI: https://localhost:5001/swagger/index.html 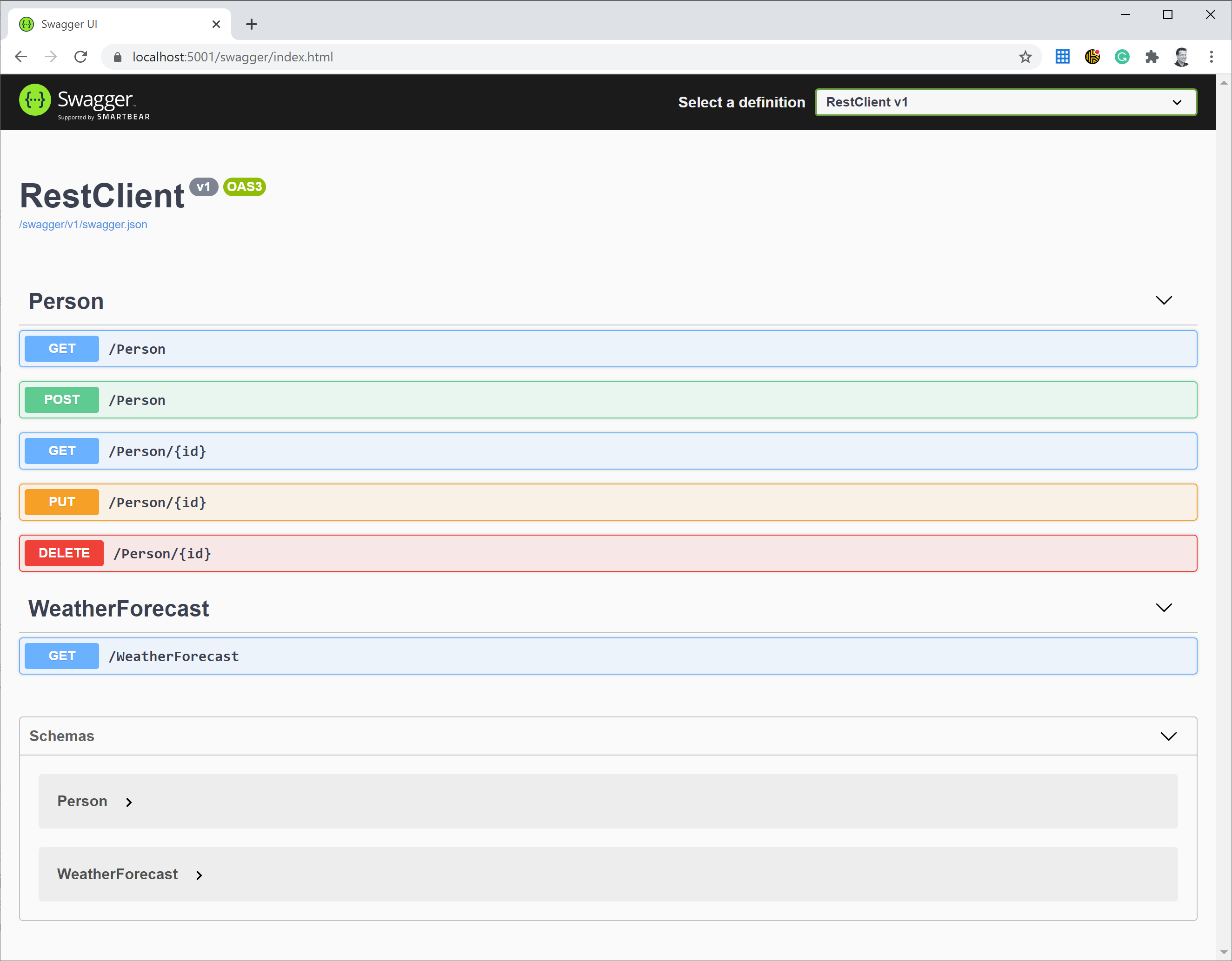 The Swagger UI will help you to configure the REST Client files.

Ok. Let's start. I created a new file called Person.http in the ApiTests folder. You can add more than one REST Client request configuration into one file.

We don't need the Swagger UI for the two GET endpoints and for the DELETE endpoints, since they are the easy ones and look the same as in the WeatherForecast.http:

The POST request is just a little more complex

If you now open the POST /Person section in the Swagger UI and try the request, you'll get all the information you need for the REST Client:

In the http file it will look like this:

You can do the same with the PUT request:

This is how it looks in VSCode, if you click the CodeLens link for the GET request : 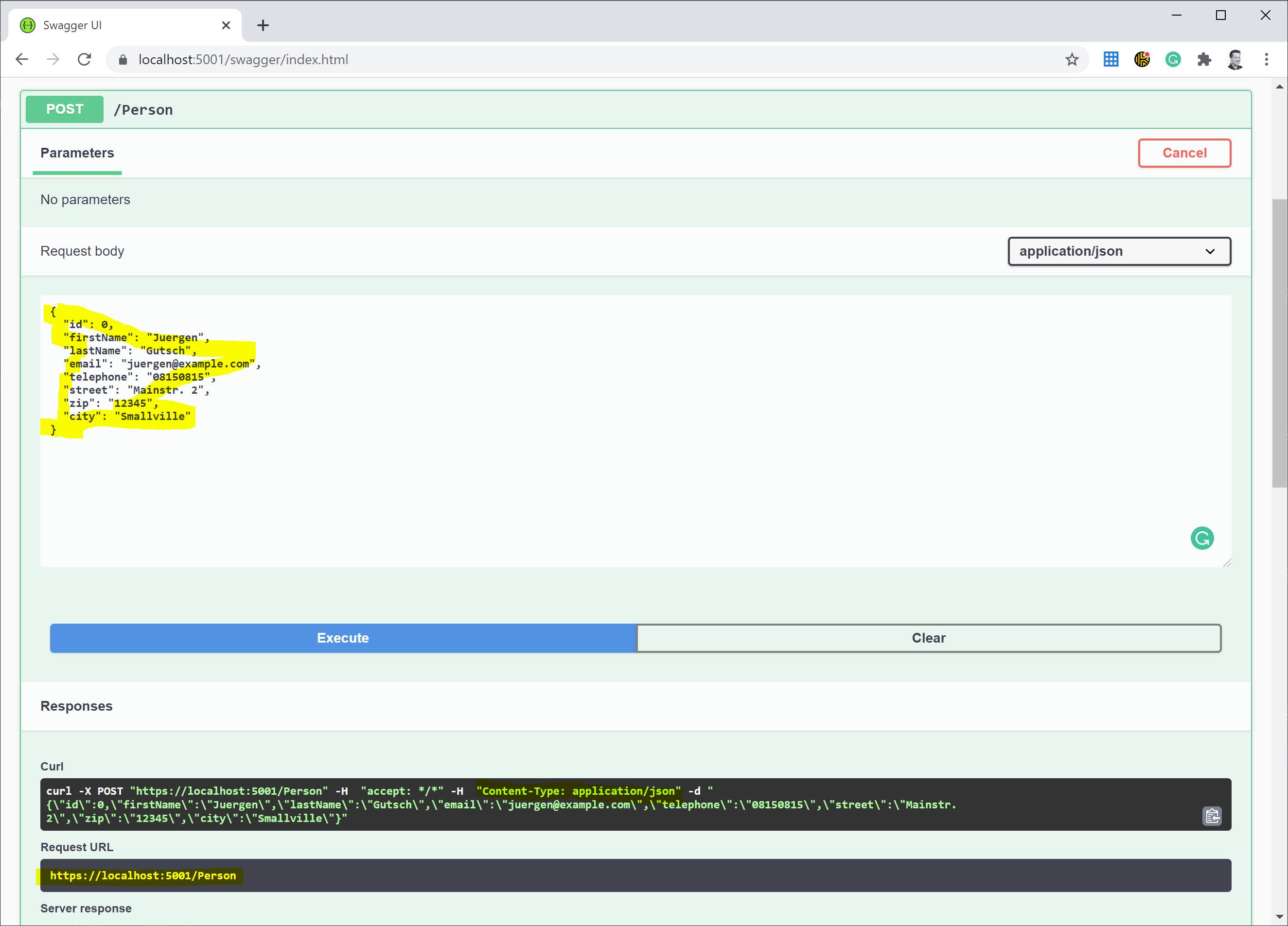 Actually, it is not only about REST. You can test any kind of HTTP request this way. You can even send binary data, like images to your endpoint.

This is a really great extension for VSCode and I'm sure I will use Fiddler or Postman only in environments where I don't have a VS Code installed.