By now all of the security-minded users have upgraded to the current version of WhatsApp, which supports end-to-end encryption.

End to end encryption, as the name suggests is a way of encrypting communication between two parties such that a third party, or even Whatsapp themselves, cannot decrypt/read the communication.

For a while now, I have been trying to understand the algorithm from the white paper which Whatsapp has published and I apparently realized that explaining the algorithm in simple terms seems almost impossible.

Whatsapp uses the Curve25519 based algorithm. The history of Curve25519 is worth noting as it was introduced after the concerns over allegations that certain parameters of the previously prevalent P-256 NIST standards have been manipulated by NSA for easier snooping. Elliptic Curve Diffie Hellman algorithm is a mathematical algorithm which helps two communicating entities to agree upon a shared secret without actually sending the actual keys to each other.

To understand the article and the method which they use, it is necessary to have a basic understanding of advanced cryptographic algorithms. So if you are not aware of ECDH, AES, SHA etc, this article may not entertain you. The following video by Robert Pierce beautifully explains the ECDH algorithm.

In the following flow chart,  all the key exchanges which occur when a user installs WhatsApp up until a message is sent to another user. Message key is a one-time usable key and the process is repeated from the step where the new chain key is calculated.

Step By Step Process of Whatsapp End to End Encryption 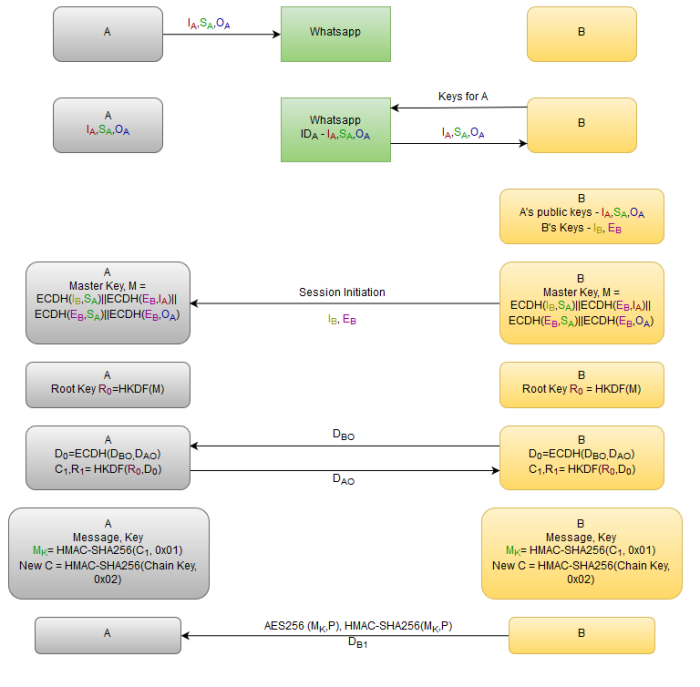