Alluxio provides a distributed data access layer for applications like Spark or Presto to access different underlying file system (or UFS) through a single API in a unified file system namespace. If users only interact with the files in the UFS through Alluxio, since Alluxio has knowledge of any changes the client makes to the UFS, it will keep the Alluxio namespace in sync with the UFS namespace (see the left figure below).

However, where a file in the UFS is changed without going through Alluxio, the UFS namespace and the Alluxio namespace can potentially get out of sync. When this happens, a UFS Metadata Sync operation is required to synchronize the two namespaces (illustrated in the right figure). 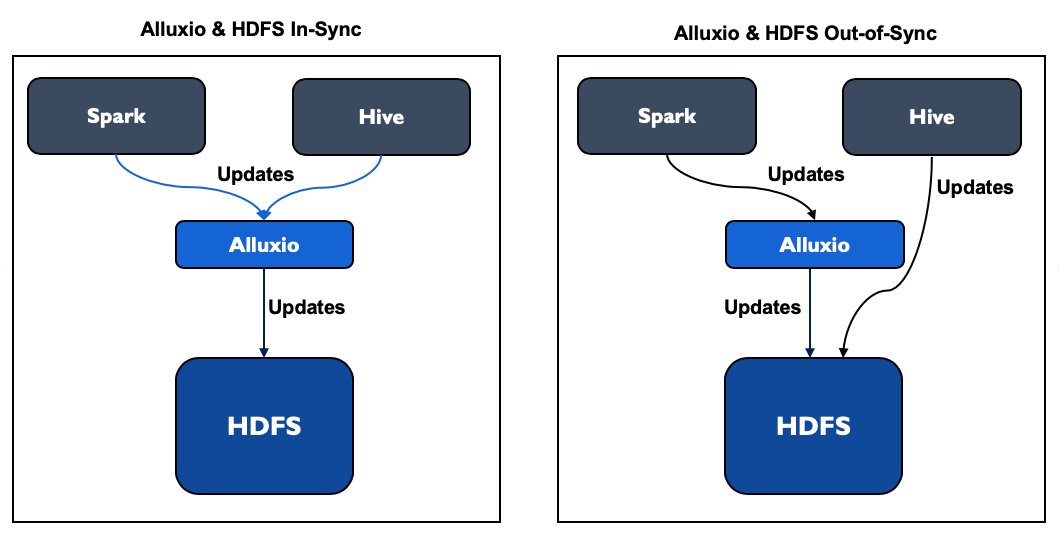 In Alluxio 2.0, there are two ways to ensure the metadata sync between Alluxio and UFS.

Here is an example.

This tells alluxio to always fetch the metadata information from the UFS.

One thing to note is that the Alluxio system never synchronizes with the UFS unless there is a client request to that UFS. This can cause problems because the first time a particular client accesses the UFS, the extra cost of accessing the UFS can cause a slowdown of the client request. This calls for a mechanism that will synchronize the Alluxio namespace and the UFS namespace in the background, or Active UFS sync.

Alluxio 2.0 preview release supports a new feature “Active UFS Sync.” It allows the users to specify a directory to be synchronized between Alluxio namespace and the UFS namespace, at a regular interval with a number of parameters to fine-tune that syncing behavior. Currently, Active UFS Sync is only supported between Alluxio and HDFS 2.7 or later. To use this feature, the user running Alluxio must be an HDFS admin user, in order to listen to the event stream HDFS provides.

You can also stop active sync on a directory by using the following command.

There are a few parameters to optimize the active UFS sync behavior.

The system guarantees that we will start syncing a directory if it is "quiet," or it has not been synced for a long period (a period longer than the max age).

When using Alluxio, it is important to keep the Alluxio namespace and the UFS namespace consistent. This article describes two ways to perform this synchronization. The synchronization can happen with a client call to Alluxio (On-demand) or happen in the background (Active UFS Sync), each with its own unique advantages. On-demand UFS metadata sync happens only when a client calls Alluxio, therefore it allows administrators to precisely control when sync happens. Active UFS Sync happens in the background, hence it requires minimal configuration and management. Administrators can choose the right strategy based on the specific use case.