Not long ago, I was given the chance to speak with Loggly’s Sven Dummer about the importance of logging for game development. However, I got more a lot more than just that… Sven actually gave me a comprehensive tour of Loggly via screenshare, telling me a bit about the basics of logging—its purpose and how it’s done—and what particular tools Loggly offers up to make it easier for those trying to sort through and make sense of the endless haystack of data that logs serve up. And after my crash course in logging and Loggly, Sven did indeed deliver a special use-case for logging that was particular to game development, though I think it can be applied creatively elsewhere, as well.

First off, let me recap a bit of information that Sven provided about logging and log management. If you want to skip ahead to the game dev use-case, feel free.

Crash Course: My Experience With Logging and Loggly

Upon sharing his screen with me, Sven first took me to the command line of his Mac to illustrate just how much information logging generates. He entered a command revealing a list of all the processes currently happening on his laptop and, as you’ve probably already guessed, there was a lot of information to show. Data spat out onto the page in chunks, and I quickly became overwhelmed by the velocity and disorganization of words and numbers perpetually scrolling onto the screen. This information—some of it obviously very useful to those that know what they’re looking for—was delivered piece by piece very quickly. The format of the data was “pretty cryptic to people like you and me” as Sven put it, but what we were looking at was comparatively easy compared to the data formats of some logs.

And that’s just it, there is no standard format for log data. It can come in a variety of file types and is displayed differently depending on the type. In Sven’s words:

“Every application or component typically writes its own log data in its own log file, and there is no one standardized format, so these log files can look very different. So, if you want to make sense of the data, you have to be somewhat familiar with the formats.”

And continuing on to explain how this can become even more difficult to manage when pulling data from a multitude of sources, Sven gave this example:

“Let’s imagine you’re running a large complex web application… you’re in a business that’s running a webstore. In that case, you might have a very complicated setup with a couple of databases, a web server, a Java application doing some of your business logic—so you have multiple servers with multiple components, which all do something that basically makes up your application. And so, if something goes wrong, then the best way to trace things down is in the log data. But you have all these different components generating different log files in different formats. And, if your application is somewhat complex and you have 25 different servers, they all write the log data locally to the hard drive so you can imagine that troubleshooting that can become quite difficult.”

He continued on to explain how a log management tool like Loggly can gather together these many different logs (it supports parsing of many different formats out of the box) and display them in a unified format—not only to make the information more presentable, but also to securely provide access to an entire team:

“Let’s say you have an operations team and these folks are tasked with making sure that your system is up and running. If they were supposed to look at the log data on all these individual servers and on all these components, they would have to know how to: 1. log into those servers, 2. be able to reach the servers inside your network, 3. have credentials there, 4. know where the log files reside; and then, they would still be looking at all of these individual log files without getting the big picture.

However, instead, they could send all of their logs to Loggly, locating them in one place. This not only allows for a cohesive picture of all the logs that make up a web application [for example], but it also removes the need for everyone on your operations team to log into every single server in order to get access to the logs, which is important from a security perspective. Because, you don’t necessarily want everybody to be able to have administrative privileges to all these different servers.”

At this point, Sven launched Loggly and it was a complete sea-change. Rather than a black terminal window overflowing with indistinguishable blobs of text, the interface proved to be much more organized and user-friendly. With Loggly, Sven showed me how to search for particular logs, filter out unwanted messages, drill down to a specific event and grab surrounding logs, and display information in one standardized flow, so that it was much easier for the viewer to sort, scan, and find what he/she is after. He also pointed out how one might automate the system to track and deliver specific error messages (or other information) to corresponding team members who that information is best suited for. Through Loggly’s available integrations, one might have this information delivered via a specific medium, like Slack or Hipchat, so that team members receive these notifications in real time and can act in the moment. Honestly, there were so many features available that Sven showed to me, I don’t think I can cover them all in this post—if you want to see more about the features, take a look around this page for a while and explore the tutorial section. 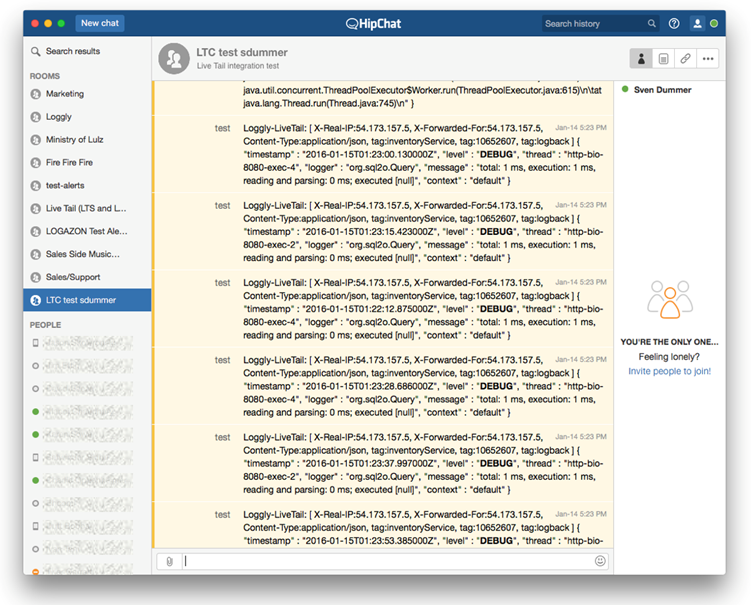 One thing I remember saying to Sven is that the command line view of logs looks a bit like the familiar green-tinged code lines that spastically scatter across the monitors in The Matrix, endlessly ticking out information on and on and on… and on. He was quick to point out that Loggly still provided a command line-esque views of logs via their Live Tail feature, but with more control. I highly recommend checking it out. 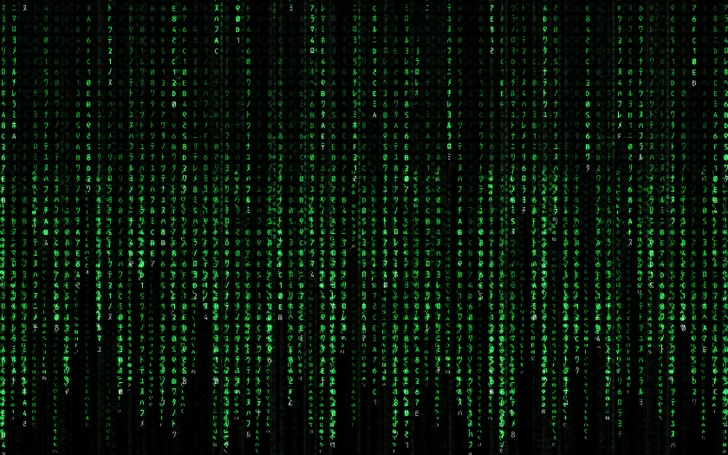 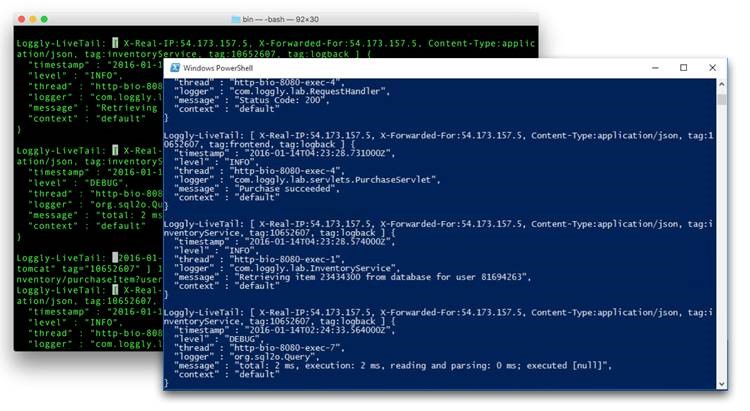 Loggly Live Tail in action... running in an OS X Terminal and on Windows PowerShell.

The Importance of Logging for Game Development

So, typically one might use logging to discover performance bottlenecks, disruptions in a system, or various other disturbances which can be improved after some careful detective work. However, when looked at through another lens, logs can offer up much more interesting information, revealing user behavior patterns that can be analyzed to improve a game’s design and creative direction. Let me take you through a couple of examples that Sven offered up which shed light on how one might use logs to uncover interesting conclusions.

Sven launched a Star Fox-esque flying game in his browser (a game written in Unity, a format which Loggly supports out of the box) and began guiding his spaceship through rings that were floating in the air. It was pretty basic, the point being to make it through each ring without crashing into the edges. 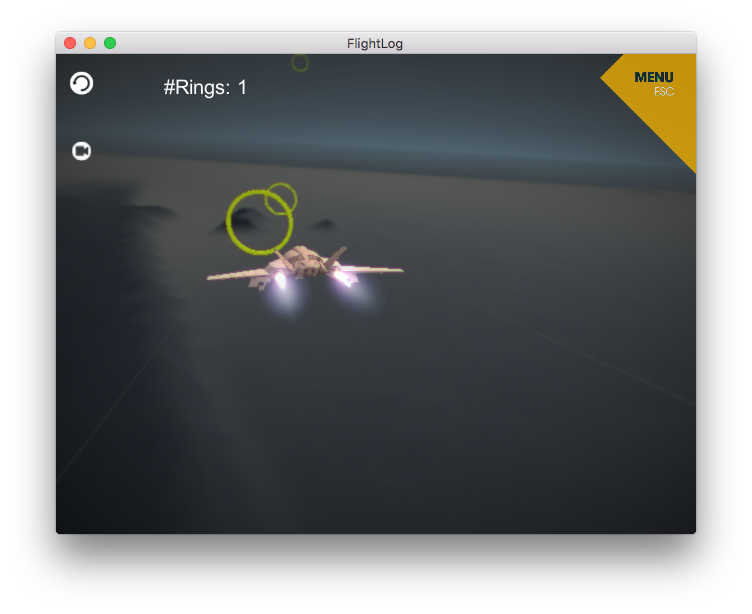 This is an image of Loggly's demo game... not Star Fox!

While flying, he opened up Live Tail and showed me the logs coming in at near real-time (he explained there was a very small network delay). Back in the game, he began switching camera angles, and I could see a corresponding log event every time he triggered the command. This is where it gets interesting…

“The camera changes are being recorded in the log and I can see them here. Now, this is interesting because it will also tell me from which IP address they’re coming. And this is just a very simple demo game, but I could also log the ID of the user for example and many more things to create a user behaviour profile. And, that is very interesting because it helps me to improve my game based on what users do.

For example, let’s say I find out that users always change the camera angle right before they fly through ring five, and perhaps a lot of users fail when they fly through this ring. And, maybe that’s a source of customer frustration… maybe they bounce the site when they reach that point. And maybe then, I realize that people are changing the camera because there’s a cloud in the way that blocks the view of ring five. Then I can tell my design team you know, maybe we should take the cloud out at this point. Or, we can tell the creative team to redesign the cloud and make it transparent. So, now we’re getting into a completely different area other than just IT operations here. When you can track user behavior you can use it to improve things like visuals and design in the game.” 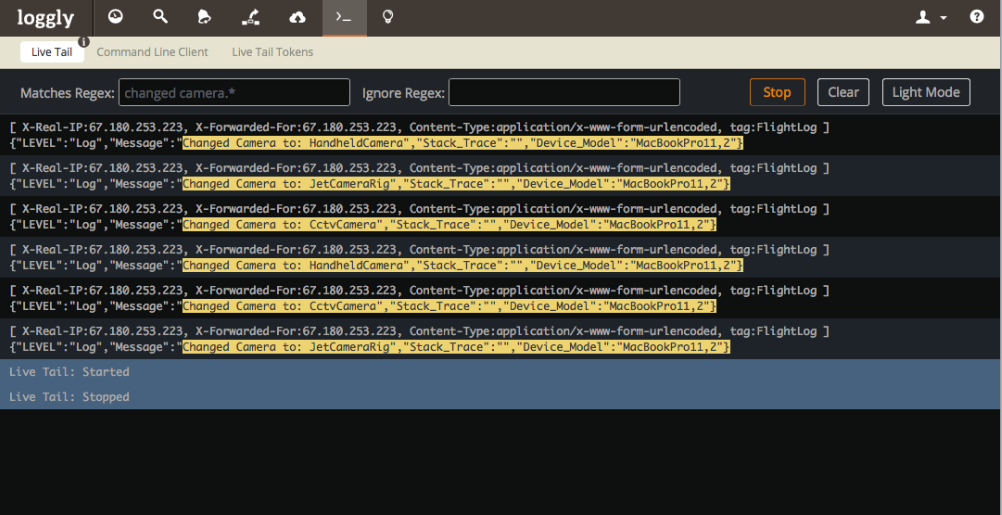 Logs gathered from the change in camera angles within the demo game.

I found this idea fascinating, and Sven continued on describing a conversation he had with unnamed Mobile game publisher who recently used Loggly in a similar way…

“We showed this demo at GDC and there was actually somebody who visited our booth who I had a very interesting conversation with on this topic. Basically, they told me that they develop mobile games for smart phones and had plans to introduce a new character in one of their games for gamers to interact with. Their creative team had come up with 6 or 7 different visuals for characters, so their idea was to do simple A/B testing and find out which of these characters resonated best with their users through gathering and studying their logs in Loggly. Then they planned on scrapping the character models that didn’t do well.

However, when they did their AB testing they got a result that they were not at all prepared for. There was no distinctive winner, but the regional differences were huge. So, people in Europe vs. Asia vs. America—there was no one winner, but rather there were clear winners by region. So, that was something that they were not expecting nor prepared for. And they told me that they actually reprioritized their road map and the work that they had planned for their development team and decided to redesign the architecture of their game so that it would support serving different players different characters based on the region that they were in. They realized, they could be significantly more successful and have a bigger gaming audience if they designed it this way.”

Once again, I found this extremely interesting. The idea of using logs creatively to uncover user behavior was something completely novel to me. But apparently, user behavior is not the only type of behavior that can be uncovered.

“Just recently there was an article on Search Engine Land where an SEO expert explained how to answer some major questions about search engine optimization by using Loggly and log data. Again, a completely different area where someone is analyzing not user behavior but, in this case, search engine robots—when do they come to the website, are they blocked by something, do I see activity on webpages where I don’t want these search robots to be active? So, I think you get the idea, really these logs can be gathered and used for any sort of analysis.”

And, that’s basically the idea. By pulling in such vast amounts of data, each offering its own clues as to what is going on in an application, log management tools like Loggly act as kind of magnifying glass for uncovering meaningful conclusions. And what does meaningful mean? Well, it’s not limited to performance bottlenecks and operational business concerns, but can actually provide genuine insights into user behavior or creative decision-making based on analytics.