This article describes the traditional database and machine architectures from Oracle, Microsoft, and IBM. It provides a high-level description of the main solutions, including shared memory, shared disk, and shared nothing. It describes how each option attempts to address the challenges of performance and scalability and describes the advantages and drawbacks of each.

It goes on to explain how a Data Warehouse startup has revolutionized database design with a solution designed for the cloud.

Don’t worry if you don’t have a Ph.D. in hardware architecture — this is a Plain English article. 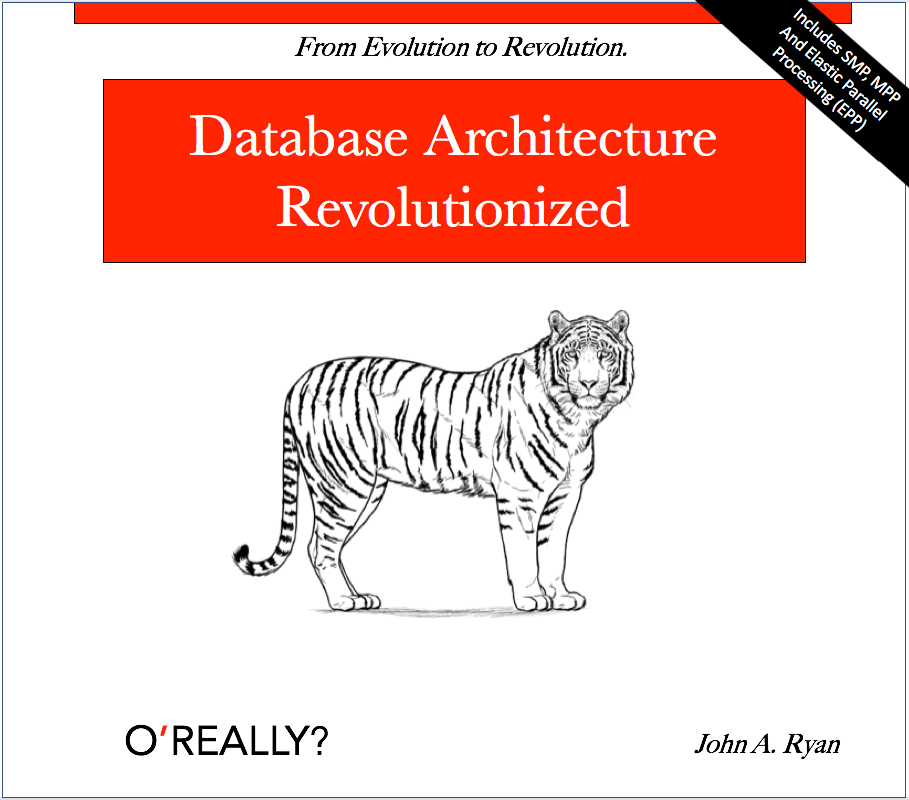 Broadly speaking, any given database application needs to deal with:

Despite the distinctly different workload, the major database vendors (Oracle, Microsoft, and IBM) have stubbornly insisted upon extending their existing product line to meet all requirements, which left a window of opportunity for specialized database solutions.

As user numbers and data volumes grow and analytic queries demand likewise, it is increasingly difficult to deliver raw data for analysis, let alone produce business insights in a timely fashion. To make matters worse, many businesses are working on a digital transformation program, which often involves installing analytic solutions within the operational data pipeline. This means near real-time business intelligence is no longer a should-have requirement but a must-have solution, with analytic results delivered within seconds of a real-world event.

As a result, it becomes increasingly important to be agile and respond quickly to changes in demand, and a fixed on-premises infrastructure is no longer an acceptable approach.

As any database architect will testify, the key non-functional requirements of almost any database platform include:

Some of the above requirements are mutually exclusive, as, for example, it’s possible to tune a system to support millisecond performance for thousands of users, but difficult to maximize batch query throughput on the same platform.

Until recently, the most common options available were:

The Shared Everything (SMP) Solution

The diagram below illustrates a typical shared-everything solution. It shows a single database server that executes queries, with a hot-standby system accepting synchronously replicated changes to provide high availability. In the event of primary system failure, all operations are switched to the standby system.

The above architecture has the advantage that it is battle-hardened and has delivered a reasonable general-purpose platform since the 1980s. It’s a simple architecture that, for many use cases, is a good option. It does, however, have the following drawbacks:

"You cannot put CPU in the bank and save it for later. So, if you are running with idle cycles you should be looking for more ways to use it." —  Tom Kyte (Oracle)

In addition to the issues described above, the standard database architecture used by Oracle, Microsoft, and IBM involves caching data in a buffer pool to reduce disk I/O, logging changes to a write-ahead buffer, and locking and latching to ensure data consistency and ACID compliance. This architecture was driven by the need to make the best use of expensive and relatively slow CPU and memory resources. However, although disk bandwidth and latency are still a problem, memory capacity and CPU performance are over a thousand times bigger and faster.

This has huge implications for system throughput, and the chart below illustrates a surprising feature of this traditional (perhaps legacy) architecture:

Taken from Dr. Michael Stonebraker’s research paper, OLTP Through the Looking Glass, it shows the latency built into the traditional database architecture. It illustrates a 93 percent latency overhead resulting from locking, latching, and buffer management. To demonstrate the problem and deliver a potential solution, his team built the H-Store prototype, an in-memory OLTP database, which was eventually implemented as VoltDB.

Dr. Stonebraker’s achievement was remarkable, as the H-Store database achieved a TCP-C benchmark of over 70,000 transactions per second compared to an unnamed commercial rival that barely managed 850tps on the same dual-core hardware despite significant DBA tuning. That’s an 82x performance gain compared to a commercially available database on the same platform.

First launched in 2001 by Oracle, the RAC architecture attempted to tackle some of the scalability limitations of a single database server, which were being addressed by the MPP architecture described further below.

The diagram below illustrates how this shared-disk architecture works:

In this solution, two or more database servers are closely clustered to operate as a single server connected by fast InfiniBand connection sharing access to a common data store on disk or SSD. All machines in the cluster synchronize memory using a technique called cache fusion, which can reduce disk I/O if data is available in another node. This does, however, limit scalability, as additional nodes increase the corresponding network coordination needed to synchronize the cache, and most clusters never exceed 3 or 4 large servers.

Although the RAC architecture provides a potential scalability option for Oracle databases, the limit on the number of cluster nodes means it’s been less successful than the MPP architecture. It also needs some careful application design, as any attempt to modify the same data block on more than one node will result in pinging whereby the block is transferred between the participating nodes to complete update operations.

It is sometimes possible to segment an application, for example, using one node for batch loading and the other for queries, but this may not be feasible in many cases. As a result, most RAC clusters tend to be made up a small number of very large SMP servers, and this architecture does not provide the incremental and top-line scalability of the MPP option.

Although still commercially available and supported by Oracle, the Exadata Appliance has tended to take center stage, and this is the preferred solution for cloud deployment.

The Shared Nothing: MPP Solution

The diagram below illustrates the shared-nothing massively parallel processing (MPP) architecture in which a number of independently running servers are connected to form a single compute cluster.

Unlike the SMP system, the MPP solution is potentially highly scalable, as additional nodes can be added, which extends both compute and storage capacity. Some solutions (eg. Vertica) support deployment on inexpensive commodity hardware to control costs, while maintaining system resilience using data replication. Some MPP-based solutions can also continue running with a reduced performance despite the loss of one or more nodes and can even be scaled up without machine downtime.

On these systems, as data is loaded, it is sharded (distributed) across the cluster, so each node is responsible for a subset of the data, which makes them a great solution for VLDBs (Very Large Databases) and analytic query platforms.

Typically, the table designer selects one or more columns as the partition distribution key, and this is used to distribute data across the cluster. This has the advantage that queries that filter rows by the distribution key are executed only on the relevant nodes. Any queries that aggregate results across the entire data set are executed in parallel on every node, with potentially huge performance gains when compared to an SMP solution.

The diagram below illustrates two of the most common sharding mechanisms. Replication (used for small volume reference data) duplicates the data on each node, whereas the Hash Distribution method uses a consistent hashing algorithm to evenly distribute rows — most often, large volume transaction tables across nodes in the cluster.

This architecture does, however, come with some drawbacks:

In conclusion, the MPP architecture provides huge benefits in terms of its ability to scale concurrent queries and data volumes to hundreds of terabytes, but the limitations mean they tend to peak at about a petabyte. They can, however, be deployed using commodity servers and are equally found on premises and in the cloud.

Recently, a completely new and unique cloud-based architecture has started to emerge. One that separates compute processing from storage and has all the advantages of the MPP architecture, with the ability to deploy entire new hardware within seconds, and even size the cluster up or down on demand as needed.

The diagram below illustrates the Snowflake Computing architecture in which an unlimited number of MPP clusters can be deployed over a shared storage (deployed on either Amazon S3 or Microsoft Azure Blob storage). The entire system is coordinated and controlled using a stateless Service Layer that handles concurrency, transactions, and ACID compliance.

The Elastic Parallel Processing technology deployed by Snowflake has all the performance advantages of MPP solutions but without the drawbacks, including:

The diagram below illustrates one the greatest benefits of the EPP architecture — the ability to run multiple parallel compute clusters, each sized to a different work-load but potentially running against the same data. This means ELT loads can be run separately from data-intensive data science tasks and avoid impacting the sub-second response times needed on corporate dashboards.

As a potential Enterprise Analytics Platform, the Snowflake Data Warehouse is an outstanding solution, and currently, there’s nothing on the market to compare.

Since the early 1980s, the traditional database architectures reigned supreme, and as recent as 2016, Gartner estimated that Oracle, Microsoft, and IBM held around 89 percent of this $36b market. However, those headline figures hide significant disruption. The Database Engine Ranking web site ranks over 300 databases of which 50 percent are open source, and nine of the top 20 are non-relational (NoSQL) databases.

The wholesale move to cloud computing is further challenging the status with special OLTP and OLAP databases on the rise, some of which run both on-premises and in the cloud.

In conclusion, although the traditional shared-memory, shared-disk, and shared-nothing solutions have been hugely successful over the past 40 years, the development of Hadoop, NoSQL, and cloud-based solutions are challenging the dominance of Oracle, Microsoft, and IBM.

Finally, new innovations from HTAP vendors (also known as NewSQL technology) and from vendors including VoltDB and MemSQL are delivering millisecond performance with full ACID transactions, while Snowflake stands out as the best Enterprise Analytics Platform.

All in all, there’s never been a better time to work in the database industry, as it’s moved from slow evolution to rapid revolution.