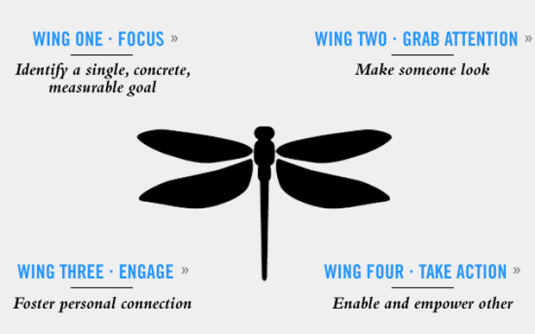 social marketing is often thought of as elusive or it’s over simplified. venture adviser and marketing strategist andy smith, and noted brand researcher and author jennifer aaker, have used extensive data and their collecting insights to break it down to a straight forward formula that midsized business can use to deeply impact their marketing and even make a difference in the world.

the dragonfly effect looks at the most effective campaigns in modern history and attributes their success to social media. they note that by 2009 that 94% of consumers didn’t believe the claims that advertisers made. however, people are influenced by colleagues and friends. traditional media may not be dead, but unless you are including a healthy mix of social marketing your days are numbered.

to understand the foundation strategy must include, smith and aaker use the analogy of the dragonfly’s four wings. the four wings are: focus on a single goal, grab attention, engage people in a cause and empower them to take action. when companies have all the wings of the dragonfly working in concert with one another, it creates a ripple effect that will connect with people in a way that makes people will feel empowered to participate, co-create, and engage.

the authors describe the four wings in more detail as:

how you identify a single, concrete, measurable goal.

humanistic. focus on who you want to help rather than jumping to solutions. empathize with your audience to develop points of view (pov): [user] needs to [user's needs] because [surprising insight].

testable. identify metrics that will inform your actions and help evaluate success. run low-cost trials to test your assumptions. set performance metrics to measure progress, and plan how to solicit feedback from your audience before you launch. establish deadlines, and celebrate small wins along the way.

clarity. keep your goals clearly focused to increase your odds of success and generate momentum. start with the simplest behavior you can change at a low cost.

happiness. ensure that your goal is personally meaningful such that the thought of achieving the goal would bring happiness to you and your audience – in some way.

how to catch someone’s eye. it’s like standing in the middle of a busy street, activating your target’s fight-or-flight survival-based neurons. (think of it as: “made you look!”)

personal. find personal hooks, ranging from physiological to self-actualization needs that can be understood within seconds.

unexpected. people like consuming and then sharing awe-inspiring information. draw them in by piquing their curiosity. look to reframe the familiar.

visceral. design your campaign so that it triggers senses– sight, sound, hearing and taste. music is powerful and can often tap underlying emotions.

visualize. show, don’t tell. photos and videos speak millions of words. synthesize your thoughts with quick visuals and show them to your pov for feedback.

how to create a personal connection, accessing higher emotions, compassion, empathy, happiness. it’s about empowering the audience to care enough to want to do something themselves…and actually do it. (think of it as forging a connection, deep and real.)

empathize. build a 2-way relationship with your audience. what really matters to them in your campaign?

authenticity. true passion is contagious. the more authentic you seem, the easier it is to connect with you and your cause. build common ground by sharing values and beliefs.

match the media. how we say something can be as important as what we say. align your communication with the right context.

enable and empower others to take action. it’s about creating, deploying, and continuously tweaking tools and programs designed to take audience members from customers to team members, in other words, furthering the cause beyond themselves. (think of it as enlisting and enabling an army of evangelists.)

easy. make it simple as simple as possible for others to act. prioritize your calls to action. your campaign is more likely to succeed if people understand what you need and can take immediate action.

tailored. people glom on to programs that they perceive they are uniquely tailored to them – where they are uniquely advantaged to do well and have disproportionate impact. here, people feel special and a part of something bigger than themselves.

open. no one should have to ask you permission to ask. provide a frame – your pov and a story – and empower others with accessible tools.