This infers that, despite frequent changes in energy and fuel cost, industrial sectors will continue to be the largest user of electricity with factories and plants dissipating tons of energy for output management. This is where industrial IoT technology can aid in the conservation of energy and making industry-wide operations more energy efficient. 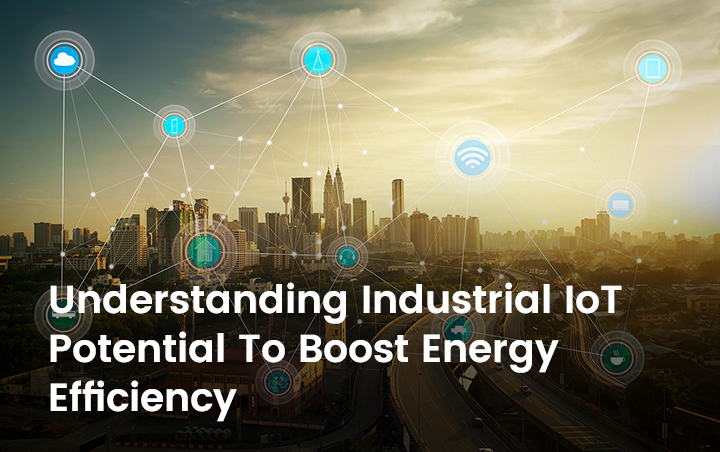 What Is the Industrial IoT?

IoT can simply be defined as a network of smart devices connected over the Internet with access to a much larger network including sensors, smartphones, data management, report systems, and more. For instance, wearable devices such as health monitoring bands use sensors to measure your vitals and display on a user interface while also syncing with its smartphone app.

The devices connected with IoT include appliances, vehicles, phones, and independent display systems. In a manufacturing plant, operators receive alerts from the hardware installed and delivers the live data on errors, malfunctions, or deviations. These IoT applications are called industrial IoT. Here, connected devices support operations and maintenance processes and are controlled from a remote computer or smartphone app.

Arguably, modern manufacturing machinery has more powerful and efficient dynamics than archaic retro tools, which are equally correct for all electronic and hardware items. However, the advanced system of these plants still appears less evolved when it comes to considering energy saving factor. In absence of latest IoT technology, the machinery may seem to consume less power, but in operations that last for hours and weeks, they fall short of delivering optimal performance while consuming massive electricity.

The ultimate focus on energy measurement often goes neglected in hectically working manufacturing and production plants. The reason is it's demanding and time-consuming in nature. Moreover, the data collected from moving tools are never presented in one central database in a consolidated format. There is a significant gap between measurement skills and lucid reporting of information – which often makes it inconvenient for energy monitors and plant managers to identify the trouble areas of energy loss and its solution.

The Impact of Industrial IoT on Energy Consumption

Industrial IoT applications can positively affect plan performance and energy efficiency with improved tracking and monitoring insight. As data is delivered real-time on a single central dashboard interface, operators can have perfect convenience for sorting and filtering them.

The energy efficiency experienced during interactions between hardware and devices grow better, which results in developing more advanced operational profiles.

Automation becomes possible and quite feasible as powerful IoT connected sensors get smart enough to use power only when they need and consume less energy in its dormant mode.

In addition, it is easier to keep eyes on system malfunctioning or know when they go through low-efficiency phases so that serious issues can be addressed a lot faster. This means your team can conserve additional resources and achieve greater efficiency at all times.

Apart from general perks, the impact of industrial IoT technology also expands to cover the backup system of different plants, especially power generation plants. They usually have an emergency solution to keep the operations going at the time of major overhaul or failure, which is especially helpful with overwhelming deadlines and grueling productions. During failures, plants can be clever enough not to exhaust resources like fuel or gas for backup generators.

During its regular operations, IoT-enabled network — made of machines and sensors — will allow you to garner data about power requirements and hardware specifications to choose the right generator matching your needs.

Combined with Big Data that forms a major part in analyzing and collecting unstructured data, industrial IoT applications can offer beneficial visibility and organized insight into actionable information needed to achieve fair energy saving. It is because of this utmost visibility and clarity of data that manufacturers can easily track energy performance by means of powerful sensors and monitor leaks and plights active in current situations.

Timely alerts generated from IoT network sensors allow plants to make definitive decisions based on the real-time situation and keep plant managers informed of the wastefulness of certain vague actions. Due to the real-time nature of data visibility of IoT technology, they can make a superior, lightning-fast strategy to prevent their operations from giving away an inordinate amount of energy or money.

To make things active and energy-efficient in a running plant, you may contemplate the following IoT-enabled resources:

IoT applications can establish a synchronized and optimized communication among different networking devices ranging from simple temperature controller to more complex automation of energy calculation or it can be building appliances that need on-and-off switching to secure optimal environment inside the rooms.

Connected with the Internet, IoT-enabled devices such as sensors and actuators empower traditional BMS (building management system) that works with PLCs (programmable logic controllers) to send sensor-specific signals to actuators. With IoT technology in place, every control system in an operational building goes real-time as it connects to a central building control application.

Addressing both consumer electronics as well as B2B industry, IoT market is likely to hit the mark of $300B or more by 2020 as Gartner predicts. Moreover, 10B shipments laden with IoT objects are expected each year from 2020 for use in applications. Though sensors and actuators will play a focused role in IoT architecture, not all market segments have one single architecture.

The IoT ecosystem is moving incredibly fast and you need a sophisticated approach to monitor the systems such as a smartphone or computer interface. Startups are likely to be in a place where user communities build exceptional IoT applications and solutions.