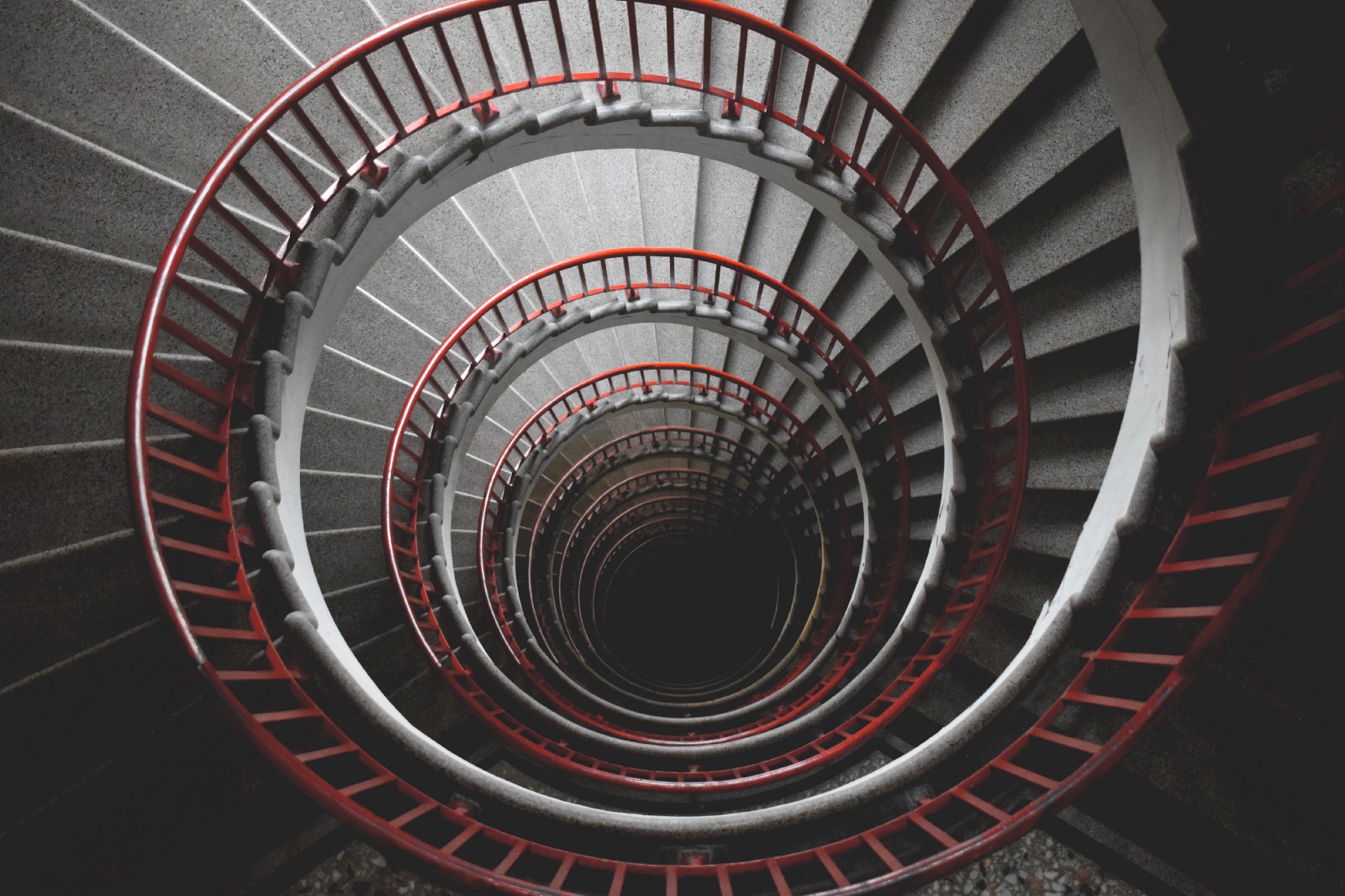 Photo by Tine Ivanič on Unsplash

In the browser, the event loop coordinates the execution of code between the call stack, web APIs, and the callback queue. Node.js, however, implements its own "Node.js event loop," which is different from the regular "JavaScript event loop." How confusing!

The Node.js event loop follows many of the same patterns as the JavaScript event loop but works slightly differently, as it doesn't interact with the DOM but does deal with things like input and output (I/O).

In this article, we'll dive into the theory behind the Node.js event loop and then look at a few examples using setTimeout, setImmediate, and process.nextTick. We'll even deploy some working code to Heroku (an easy way to quickly deploy apps) to see it all in action.

The Node.js event loop coordinates the execution of operations from timers, callbacks, and I/O events. This is how Node.js handles asynchronous behavior while still being single-threaded. Let's look at a diagram of the event loop below to get a better understanding of the order of operations: 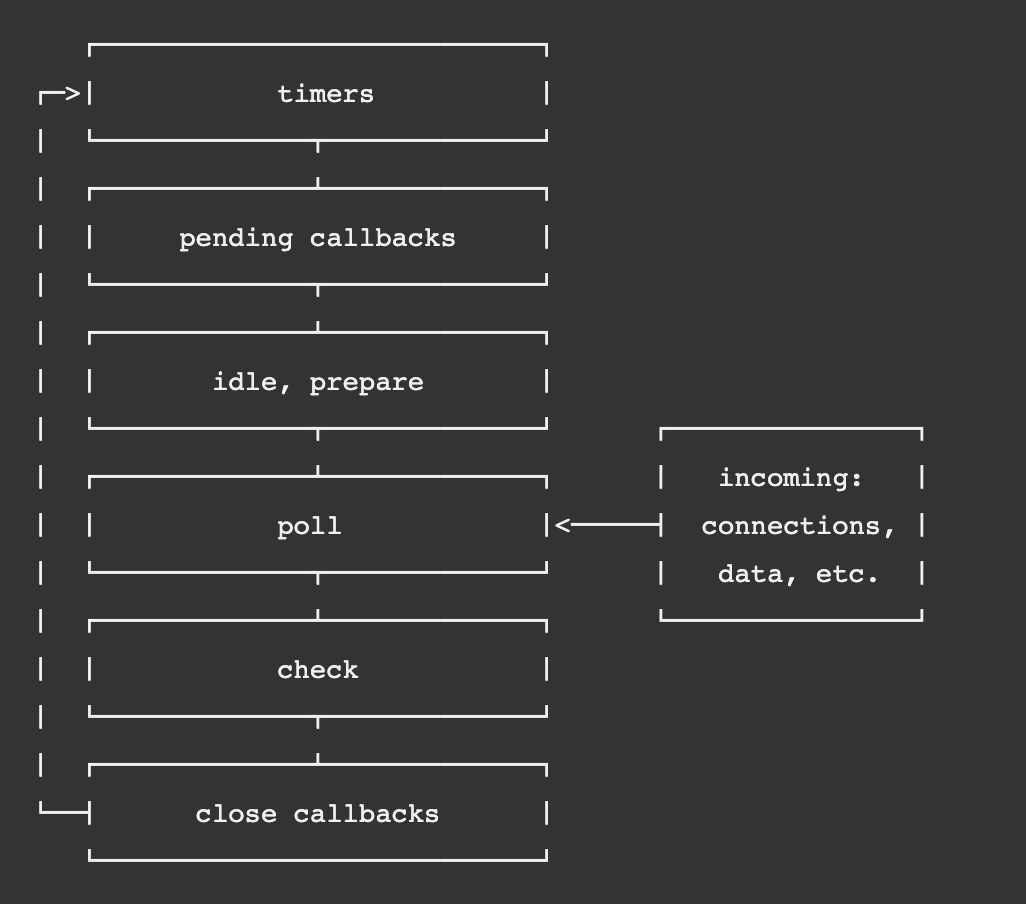 As you can see, there are six main phases in the Node.js event loop. Let's briefly look at what happens in each phase:

It's interesting to note that process.nextTick isn't mentioned anywhere in any of these phases. That's because it's a special method that's not technically part of the Node.js event loop. Instead, whenever the process.nextTick method is called, it places its callbacks into a queue, and those queued callbacks are then "processed after the current operation is completed, regardless of the current phase of the event loop" (Source: Node.js event loop docs).

Now, if you're like me, those explanations of each phase of the Node.js event loop may still seem a little abstract. I learn by seeing and by doing, so I created this demo app on Heroku for running various code snippet examples. In the app, clicking on any of the example buttons sends an API request to the server. The code snippet for the selected example is then executed by Node.js on the backend, and the response is returned to the frontend via the API. You can view the full code on GitHub. 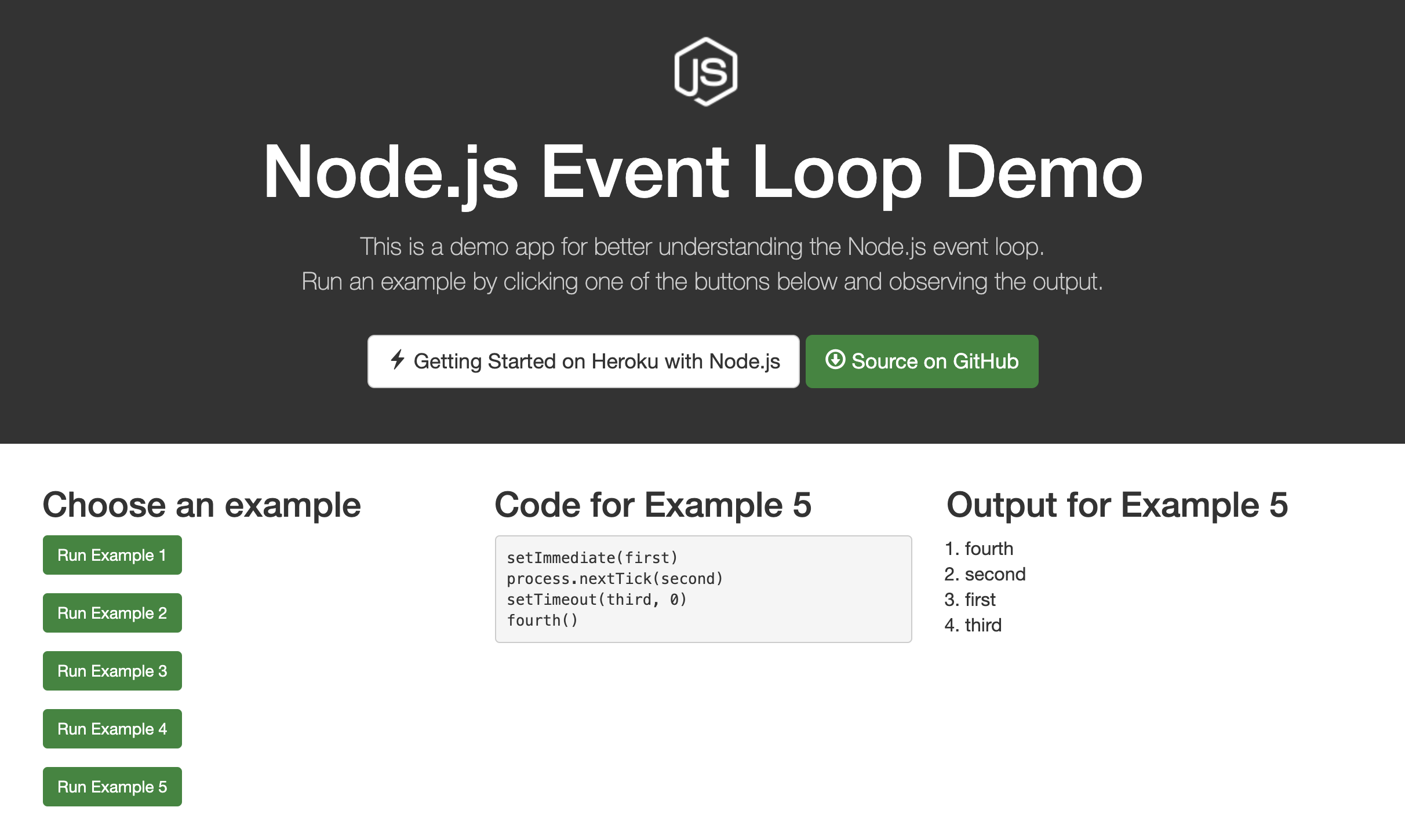 Let's look at some examples to better understand the order of operations in the Node.js event loop.

We'll start with an easy one:

Next, we'll introduce the concept of setTimeout with our second example:

Here we call our first function, then schedule our second function using setTimeout with a delay of 0 milliseconds, then call our third function. The functions are executed in this order: first, third, second. Why is that? Why is the second function executed last?

There are a couple key principles to understand here. The first principle is that using the setTimeout method and providing a delay value doesn't mean that the callback function will be executed exactly after that number of milliseconds. Rather, that value represents the minimum amount of time that needs to elapse before the callback will be executed.

Next up, we'll introduce the concept of setImmediate with our third example:

Are you starting to get the hang of it?

By now you should be a little more familiar with the Node.js event loop as well as with methods like setTimeout, setImmediate, and process.nextTick. You can certainly get by without digging into the internals of Node.js and the order of operations in which commands are processed. However, when you begin to understand the Node.js event loop, Node.js becomes a little less of a black box.

If you want to see these examples live in action again, you can always check out the demo app or view the code on GitHub. You can even deploy the code to Heroku yourself by clicking here.