Discrete Event Simulation (DES) has been used extensively in numerous fields such as manufacturing, health care services, computing (e.g. network simulations), and financial investments. DES models the operation of the system using a series of events and the simulation occurs according to computational and mathematical principles. DES constructs a conceptual model of a real system. This conceptual model is an abstract representation of the real system. The term “system” is used to describe this abstract representation (or the conceptual model). The system contains a set of entities (e.g. servers, events) that interact with each other over a period of time. The entities can have properties. For example, a server will have a processing rate (10 requests/second), scheduling discipline (e.g first-come-first-served, first-come-last-served, processor-sharing, etc.), and processing time distribution (more formally the service time distribution). At any given point in time, the system has a state. The states of variables in the system represent the state of the system.

There are several DES software packages we can use to perform DES (see here). In this article, we use Simpy. We will show how to simulate and analyze the behavior of a single server. In particular, we will look at how the arrival rate into the server and processing time (also called service time) of the server will impact the waiting time in the queue and the number of requests in the server.

Let us now discuss how to simulate a single server and analyze the results. We focus on the M/M/1 server, which consists of a queue and a server (processing element). In M/M/1, system requests arrive at the server with a rate lambda (see the figure below). The time between these arrivals (i.e. inter-arrival time) follows an exponential distribution. The server processes the requests on a First-Come-First-Served (FCFS) basis until completion. The processing times (service times) of requests follow an exponential distribution (with a given mean). The following figure illustrates the system.

The following is the Simpy code for the above system. 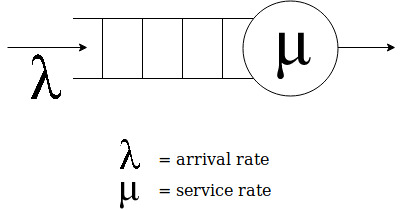 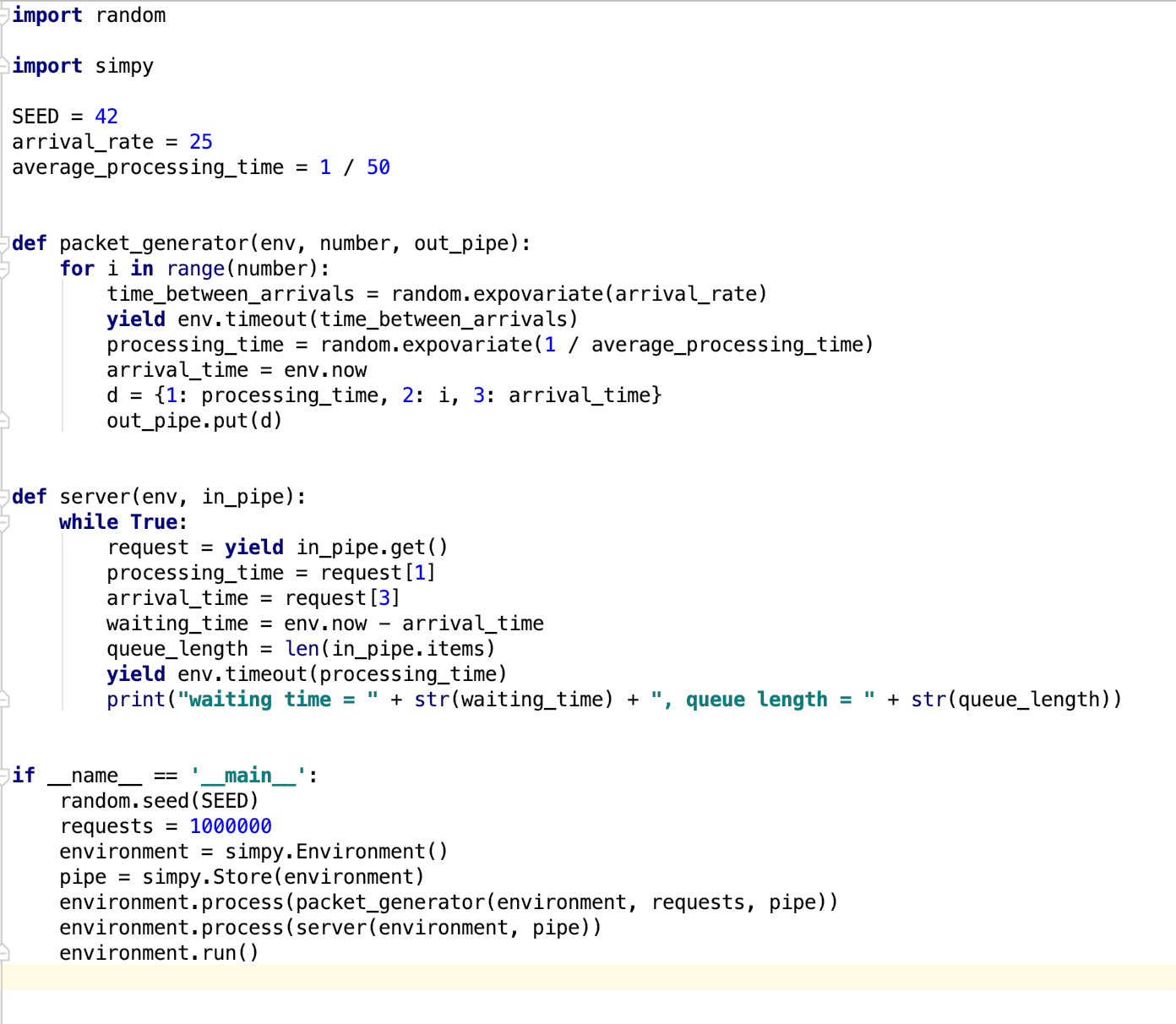 The implementation provided above uses Simpy pipes, which allows us to interconnect different components (processes) in a simulation model. The packet_generator method is responsible for generating a specified number of requests. Here, both the time between requests and the service (processing time) of requests are generated using exponential distributions. These requests are then sent to the server (refer to method server(env, in_pipe)) through an out_pipe. The server processes the requests in an FCFS manner until completion.

Analysis of Waiting Time (in the Queue)

First, let us investigate the impact of arrival rate on the waiting time in the queue. The following figure shows how the average waiting time and 99 percent (99th percentile) waiting time vary with the average arrival rate. Here, we maintain the processing rate of the server at a fixed value of 50 requests/second. This also means that the average (mean) service time is 0.2 seconds. 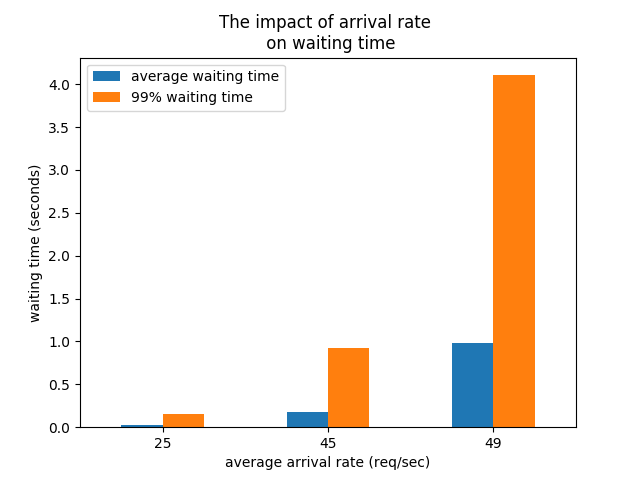 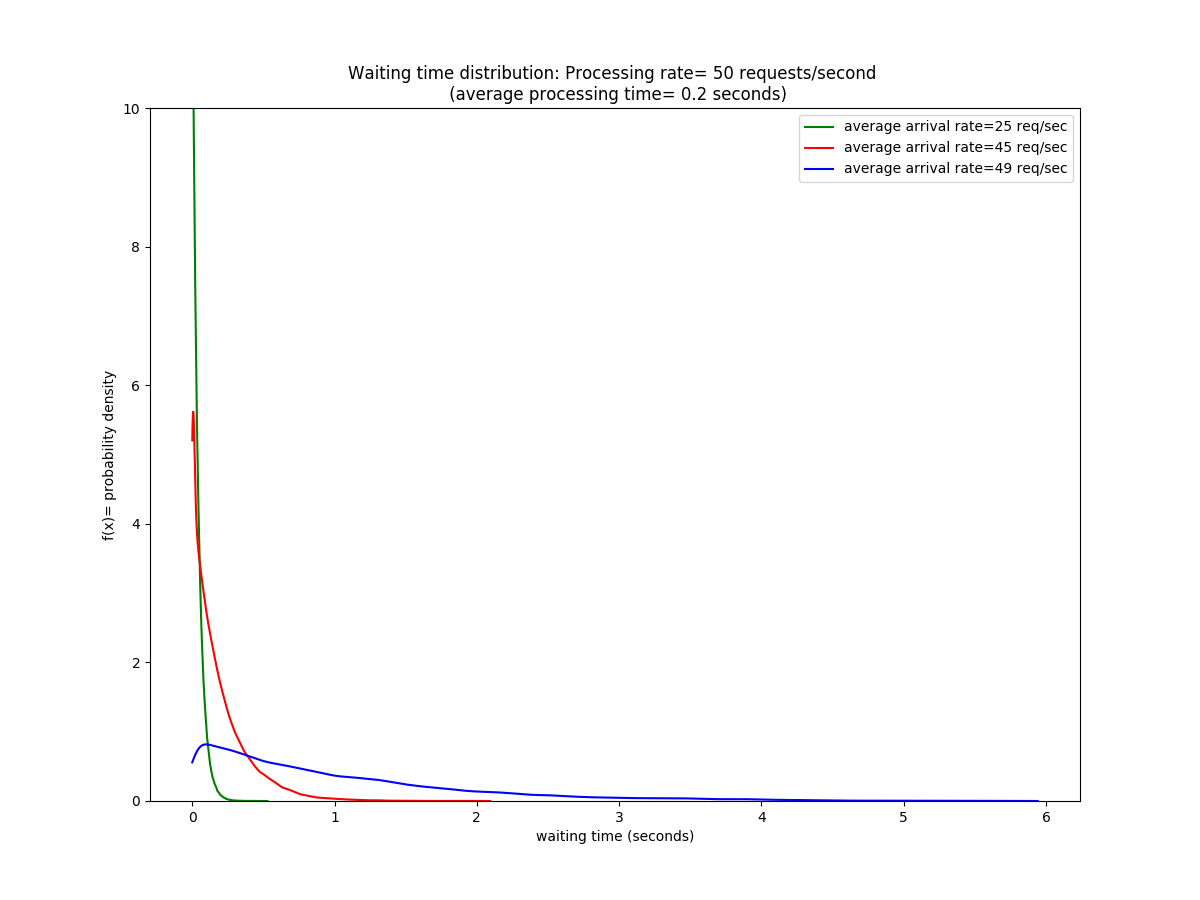 We note that there is a significant increase in the tail waiting times (latencies) under higher arrival rates. 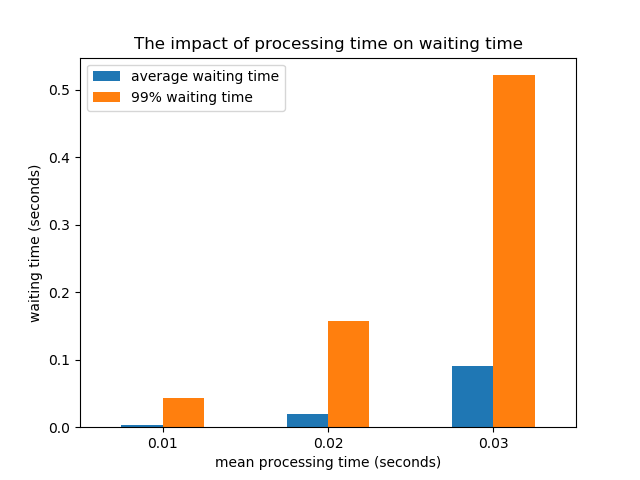 This also means that if we improve the mean processing time of requests (e.g. by optimizing the code) from 0.02 seconds to 0.01 seconds, then we will get a 4.5 x and 3.3 x improvement in the average waiting time and 99 percent waiting time respectively. Note that we notice this behavior under the arrival rate of 25 requests/second. Under different arrival rates, the factor of improvement may vary. 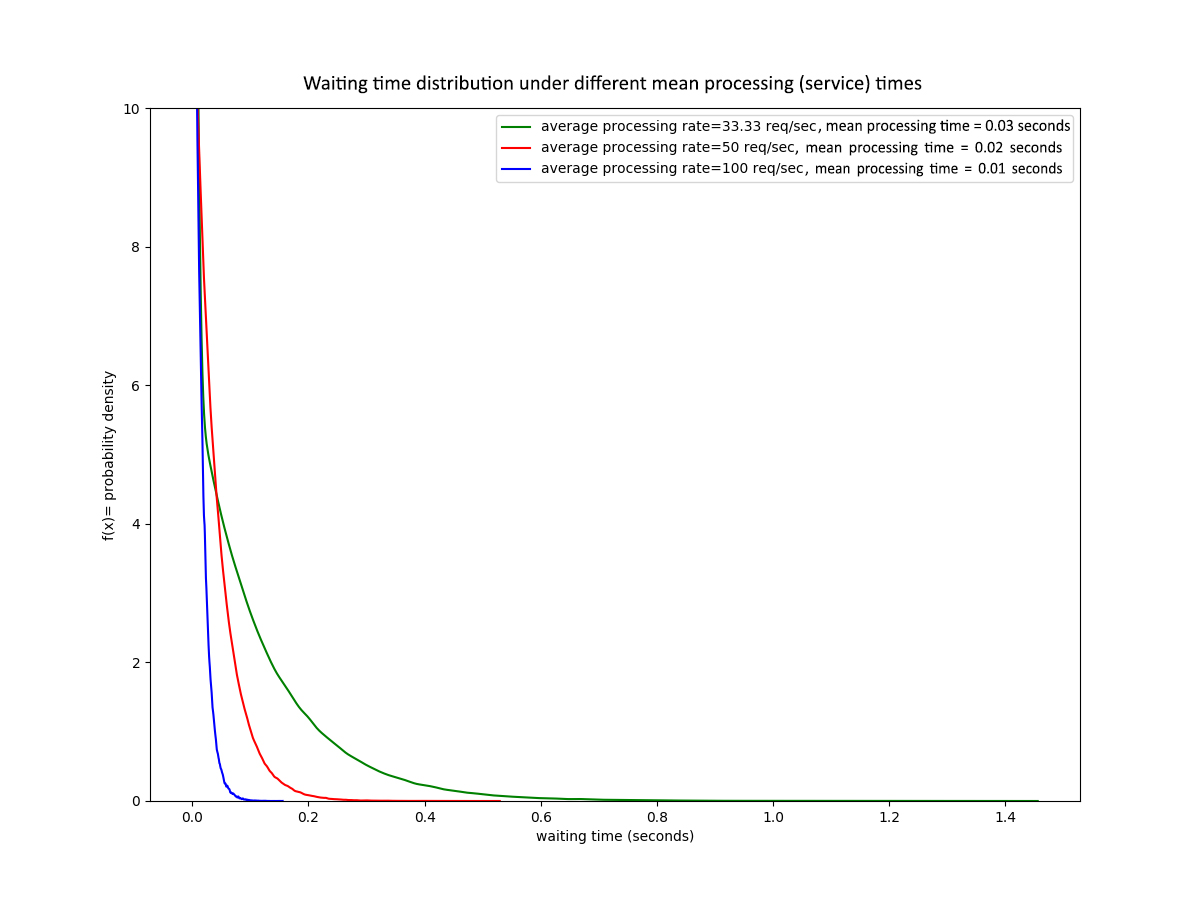 Note how the tail waiting times increases as the mean processing time increases.

Analysis of the Number of Requests in the System

Let us now analyze the behavior of the number of requests in the system.

The following figure shows how the average number of requests in the system varies with the arrival rate under a fixed processing rate of 50 requests/second (i.e. mean service time of 0.2 seconds). 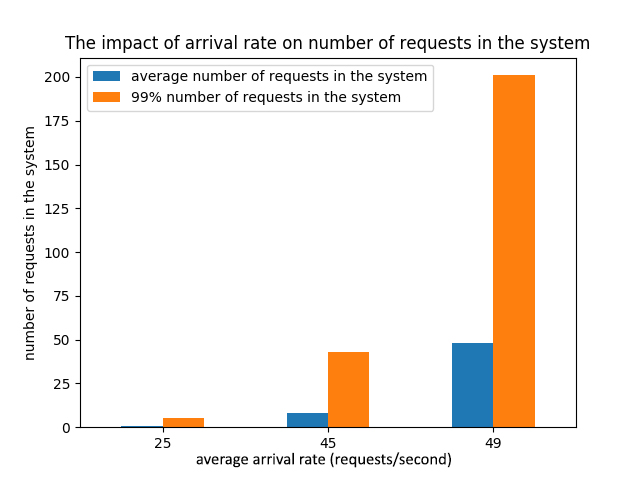 The following figure shows the histogram for a number of customers in the system. 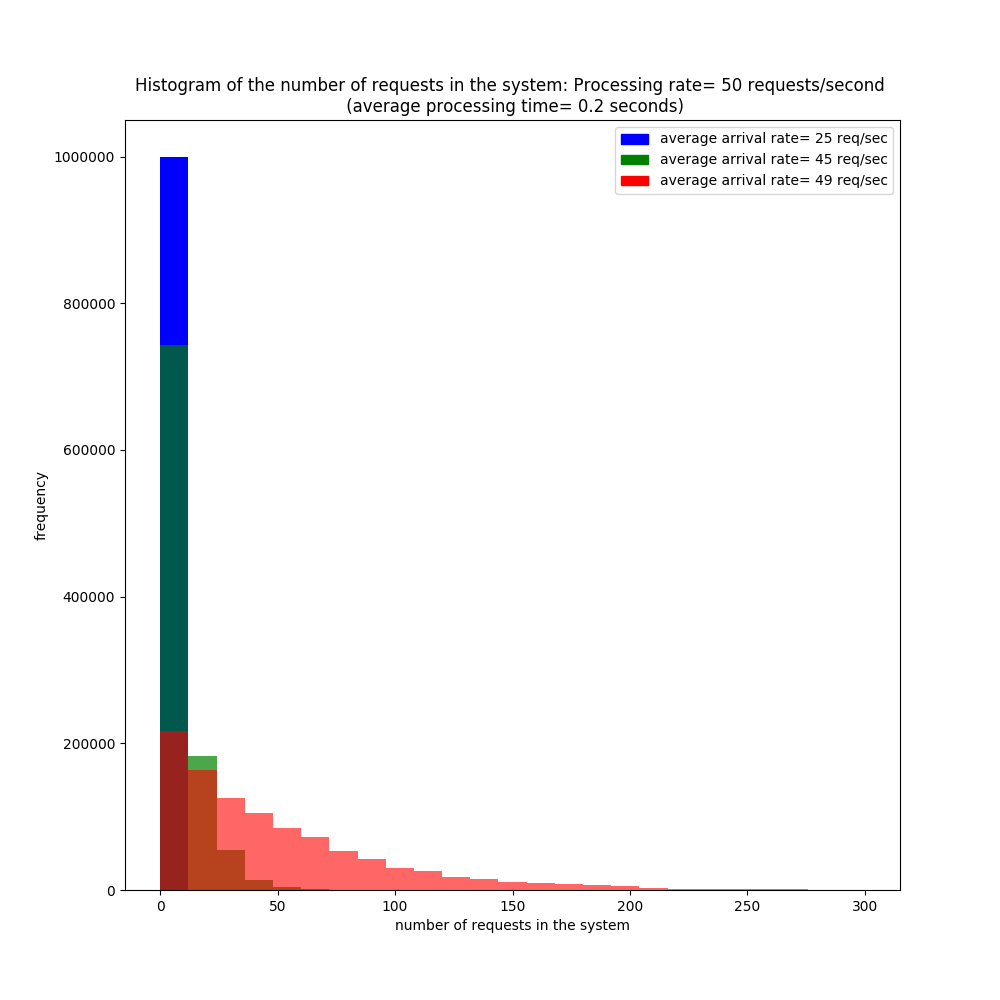 We note that the probability of having a higher number of requests in the system is higher under higher arrival rates (note: how the tail grows with the increasing arrival rate) 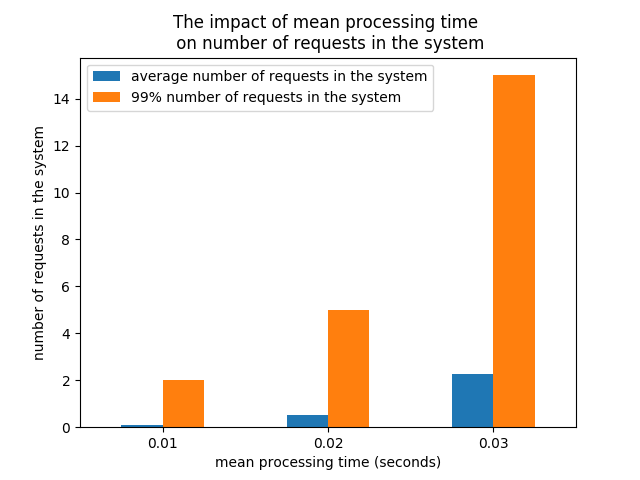 The following is the histograms of a number of requests in the system. Note the impact of the processing time on the tail of the histogram. 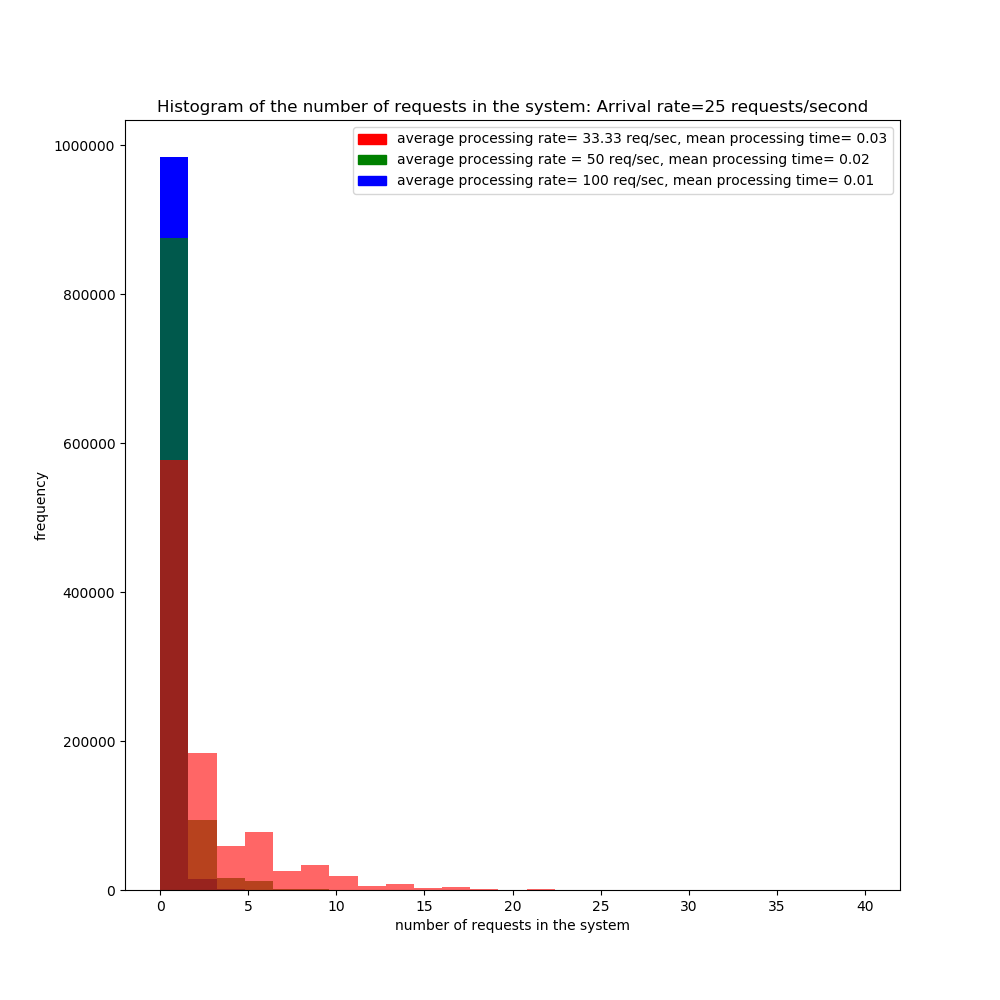 In this article, we provided a brief introduction to discrete event simulation (DES). We discussed in detailed how to simulate a single server and presented the results under different workload conditions (i.e. arrival rates, service times). We are currently using DES simulation to model and analyze the behavior of use cases that involve micro-services, ESBs and API management. Our initial analysis has revealed a lot of interesting findings and we will share the results in our future blog posts and research papers.