In today’s software development process, one of the key measures or milestones is unit testing. Actually, unit testing is a level of software testing where we can perform any type of testing against each and every individual unit or component of our program or software. Because this type of testing can be executed through an automated process which inputs data for the individual unit or components of the program through a proper data source like excel file, JSON format or any other source and we can check the logic or output of the units or programs before delivering to the actual users.

In this article, we will discuss how can we develop a unit testing platform along with coding to check the logical operations of any Angular Components. The Angular Framework has been designed with testability as a primary objective.

JavaScript has become one of the most popular programming languages to build and empower frontend/web application development. We can use JavaScript to develop simple or complex applications. However, applications in production are often vulnerable to bugs caused by design inconsistencies, logical implementation errors, and similar issues. For this reason, it is usually difficult to predict how applications will behave in real-time environments, which leads to unexpected behavior, non-availability of applications, or outages for short or long durations. This generates lack of confidence and dissatisfaction among users. Also, a high cost is often associated with fixing production bugs. Therefore, there is a need to develop applications that are of a high quality and that offer high availability.

To tackle the above scenario, we can follow TDD, or Test Driven Development, to develop the software or program. Test Driven Development is an engineering process in which the developer writes an initial automated test case that defines a feature, then writes the minimum amount of code to pass the test and eventually refactors the code to acceptable standards. When we talk about testing in Angular, we basically point out two different types of testing.

A unit test is used to test individual components of the system. That’s why unit testing is basically called isolated testing. It is the best practice of testing small isolated pieces of code. If our unit testing depends on external resources like databases, networks, and APIs, then it is not a unit test.

An integration test is a test process which tests the system as a whole and how it will run in production. Basically in Integration test all the small units or component has been logically combined and test that as a whole group. Unit tests should only verify the behavior of a specific unit of code. If the unit's behavior is modified, then the unit test will be updated as well. Unit tests should not make assumptions about the behavior of other parts of your code or your dependencies. When other parts of your code are modified, your unit tests should not fail. (Any failure indicates a test that relies on other components and is therefore not a unit test.) Unit tests are cheap to maintain and should only be updated when the individual units or programs are modified. For TDD in Angular, a unit is most commonly defined as a class, pipe, component, or service. It is important to keep units relatively small. This helps you write small tests which are "self-documenting," easy to read and understand.

Functional testing is defined as the testing the complete functionality or functional flow of an application. In case of web applications, this means interacting the different UI of the web applications as it is running by the user in the browser in real life. This is also called End to End Testing (E2E Testing).

Our testing toolchain will consist of the following tools, which can perform unit testing on Angular Framework:

In this article, we will use Jasmine and Karma to perform unit tests in Angular 4.

Jasmine is the most popular JavaScript testing framework in the Angular community. This testing framework supports a software development practice which is called Behavior Driven Development or BDD. This is one the main features of Test Driven Development (TDD).   This is the core framework that we will write our unit tests with. Basically, Jasmine and BDD  try to describe a test method case in a human-readable pattern so that any user, including a non-technical person, can identify what is going on. Jasmine tests are written using JavaScript functions, which makes writing tests a nice extension of writing application code. There are several Jasmine functions in the example, which I have described below:

Karma is a test automation tool for controlling the execution of our tests and what browser to perform them on. It also allows us to generate various reports on the results. For one or two tests, this may seem like overkill, but as an application grows larger and the number of units to test grows, it is important to organize, execute, and report on tests in an efficient manner. Karma is library-agnostic, so we could use other testing frameworks in combination with other tools (like code coverage reports, spy testing, e2e, etc.).

Karma is basically a tool which lets us spawn browsers and run Jasmine tests inside of them, which are executed from the command line. This results of the tests are also displayed in the command line. Karma also watches our development file changes and re-runs the tests automatically.

Why Is Unit Testing Required?

Each unit test is put into its own separate file. The Angular team recommends putting unit test scripts alongside the files they are testing and using a .spec filename extension to mark it as a testing script (this is a Jasmine convention). So, if you had the component /app/components/mycomponent.ts, then your unit test for this component would be in /app/components/mycomponent.spec.ts. This is a matter of personal preference; you can put your testing scripts wherever you like, though keeping them close to your source files makes them easier to find and gives those who aren't familiar with the source code an idea of how that particular piece of code should work.

Angular Test Bed (ATB) is one of the higher level Angular-only testing frameworks, which allows us to pass data to the test environment and can easily test behaviors that depend on the Angular Framework.

When to Use Angular Test Bed

If we want to develop a unit test platform for the Angular framework, we first need to install Node.js on our computers. To install Node.js, Just go to https://nodejs.org/en/ and download the latest Node.js version. 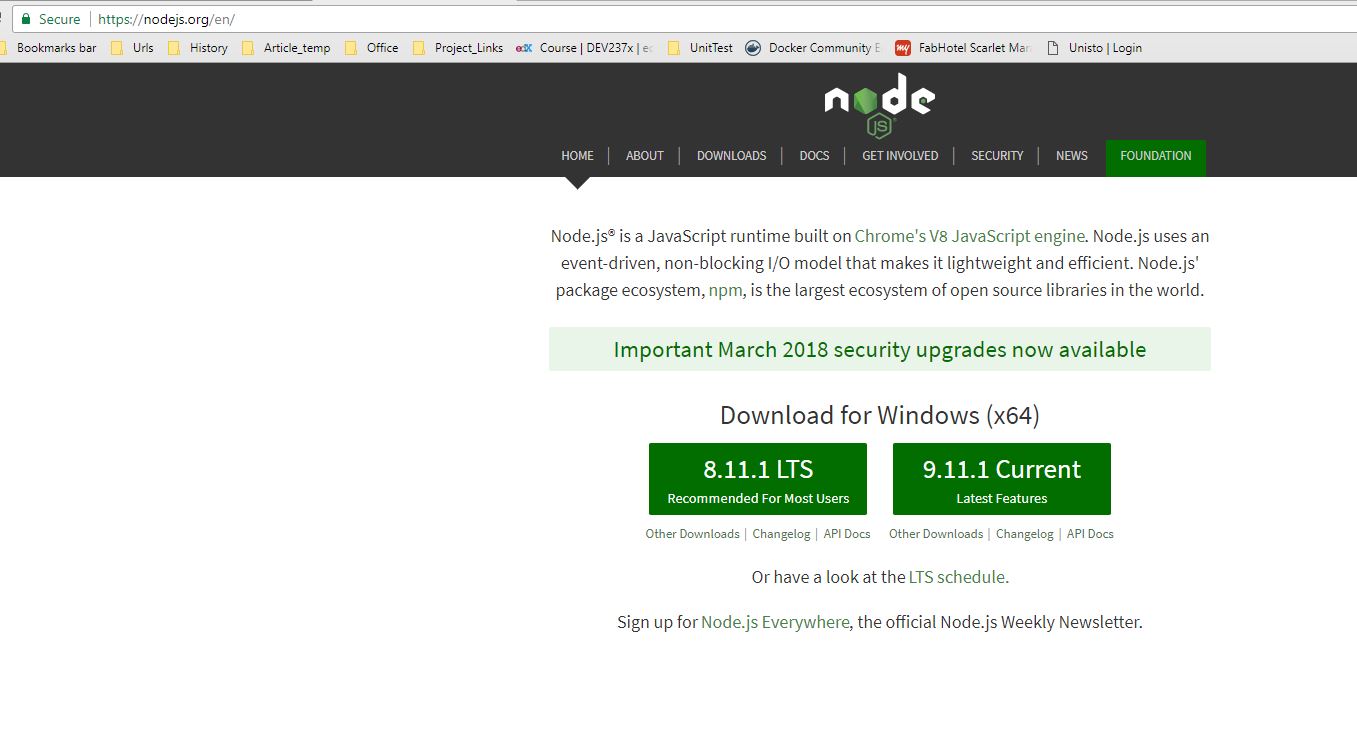 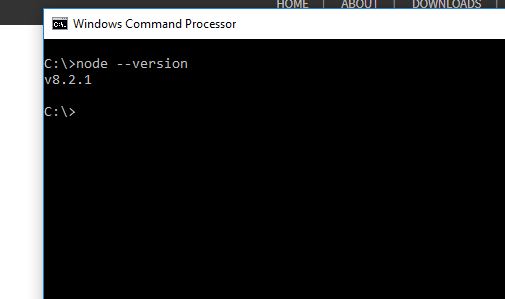 In the above command, -g represents the global installation and means you can store your code files any location on your machine. 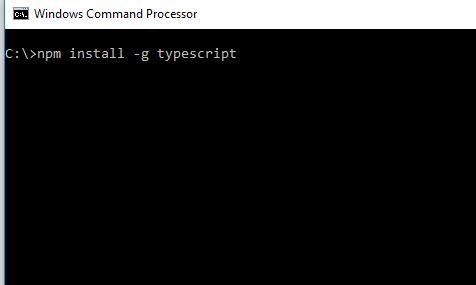 After installation, we need to check that TypeScript is properly installed or not. For that, run the below command in the command prompt: 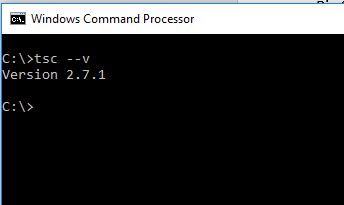 After TypeScript installation, we need to install one more package called LiteServer. It is basically a lightweight development server which acts as a node server. It serves a web page or application, opens it in the browser, and refreshes the web page automatically when any HTML or script-level changes are done. If you use Microsoft Visual Studio, then you don’t need to install this because Microsoft Visual Studio already does that for you. To install LiteServer, you need to execute the below command:

To run LiteServer, you need to go to the program folder where your index.html page location using command prompt and run this command: 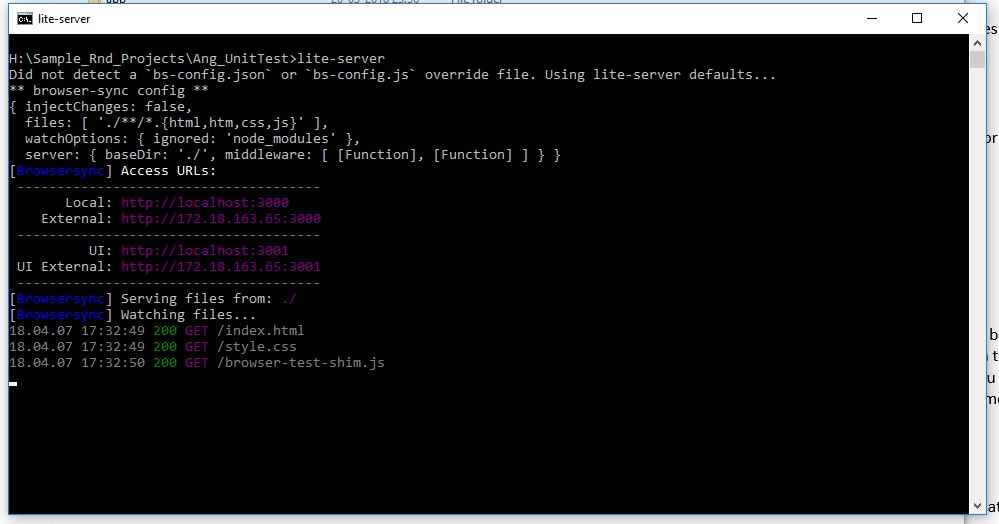 Now that our installation is done, we start to develop our first unit test program on the Angular framework.

To start a unit test, first, we need to configure the environment by creating a folder structure like below. 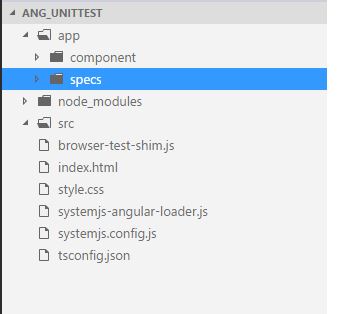 In the above index.html file, _spec_files variables are basically used to store the list of Angular unit test spec file details with a proper folder so that when we run this UI in the browser, it loads spec files one by one and executes them with the help of browser-test-shims.js. In that file, initTesting() is basically initializing the unit test methods one by one.

Now, create another TypeScript file for defining the specs for the above class file.

In the above unit test file, we perform the following steps or operations:

Now, change the code of the index.html file, as below.

Now, run the index.html file in the browser.

Now, let us change our Calculator Class as below so that we can pass numbers from unit test specs and check the result.

So, for the above code, we also need to change our unit test specs as below.

Now check the output in the browser.

This is the end of Part 1 of our series on unit test using Angular 4. In Part 2 of this series, we will discuss