While talking to my friend regarding his project, he told me about how he is doing unit testing which involves sessions in ASP.NET MVC3. His team is actually using a “HttpSimulator” which simulates the web request and then the do unit test by verifing the session by interacting with the simulator. When digging further I have come to know that this way of unit testing session objects is influenced by the “ASP.NET Webforms”. It reminds me the talk of Neil Ford on Function Programming. In that video he talks about an analogy called “Axe and Chain Saw” to explain our way of thinking as

“When we give a chain saw to people who were cutting trees by axe, they would tend to use chain saw in the same way as the use Axe. Which is obviously inefficient. So we should understand at the capabilities of the tool in our hand before we using it”.

ASP.NET MVC3 is far better than Web Forms when it comes to unit testing. We don’t need to use a simulator to test against our sessions. There is a better way to do this MVC3 and in this blog post we are going to explore it.

Shopping Cart is the first thing that strikes our mind when we want to quote an example for using Http session. So, I am going to show an app called “MyShop” a mini shopping site through which I am going to explain the concepts involved. The application flow would be as follows 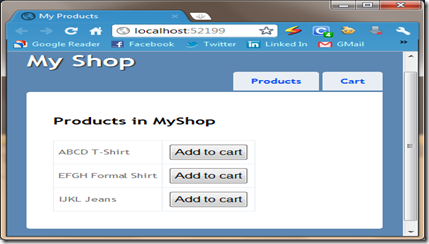 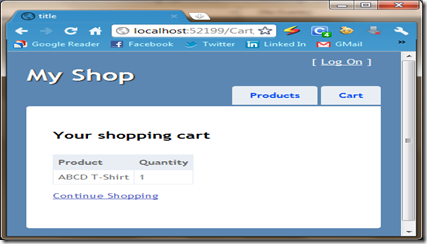 The models are simple, straight forward and self explanatory. 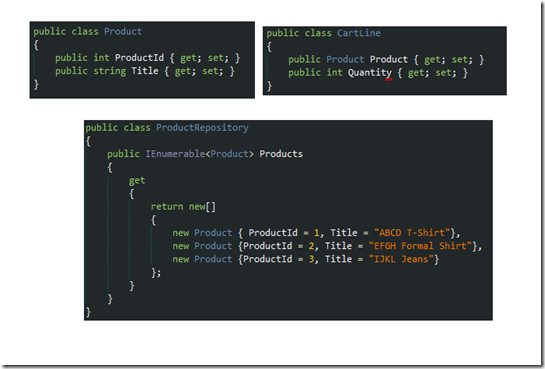 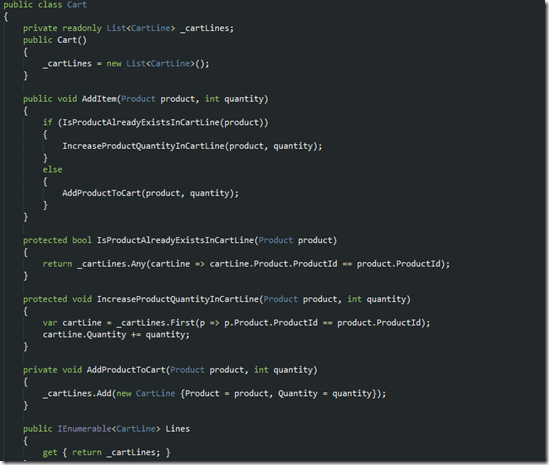 I’ve tried my level best to keep the model as simple as possible. So, Cart in MyShop will have only two public methods. One to add a product to the Cart’s Line and another one to retrieve all the products inside the Cart’s line.

In this CartController version 1.0 we have two public methods Index and AddToCart which are dependent on HttpSession object. This dependency inside the methods is actually preventing us from unit testing the CartController in simple way and we have no choice other than implementing a “Http Simulator” to unit test these two methods. As I said before there is better to do is! Here we go!!

No more Sessions!!.. Yeah.. We have got rid of the dependency on the session object by adding a new parameter called cart. Now you can use easily unit test the CartController as follows

Okay we made it easy for unit testing by moving the dependency out of the method and introduced the cart as the parameter. But how does my MVC3 framework will know the cart parameter should come from session object ?… Good Catch!! and here comes the magic called custom ModelBinder

Model binding is an exciting feature in MVC3 framework which automatically creates the C# objects directly from Http request and pass it to the Action methods in controller as parameter values. It uses a default model binder which looks at the form values, query string values that are submitted with the Http Request and create the model object.

In our case, we need to have a object of Cart which is populated from the Session object and not from the HttpRequest. The default model binder used by MVC3 has no idea about session object. So, Its our responsibility to tell to the MVC3 framework

“Hey! If there is any parameter of type Cart in controller action method, then use my own custom model binder called CartModelBinder to create the object”

There are two steps to do the above said operation

1. Creating the custom model binder by inheriting the IModelBinder interface 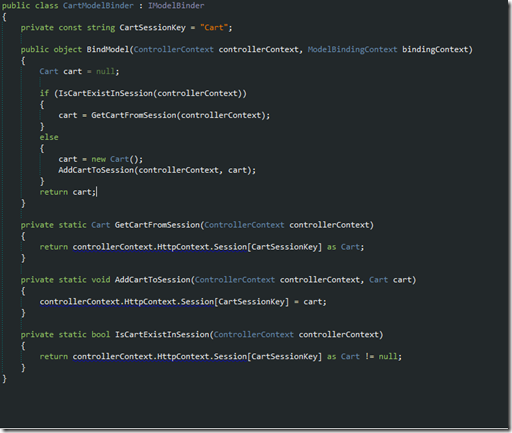 2. Registering our custom model binder in the Global.asax.cs file