A pretty cool thing that has come out of recent Machine Learning advancements is the idea of " Word Embedding", specifically the advancements in the field made by Tomas Mikolov and his team at Google with the Word2Vec approach. Word Embedding is a language modelling approach that involves mapping words to vectors of numbers - If you imagine we are modelling every word in a given body of text to an N-dimension vector (it might be easier to visualise this as 2-dimensions - so each word is a pair of coordinates that can be plot on a graph), then that could be useful in plotting words and starting to understand relationships between words given their proximity. What's more, if we could map words to sets of numbers, then we could start thinking about interesting arithmetic that we could perform on the words.

Sounds cool, right? Now, of course, the tricky bit is how can you convert a word to a vector of numbers in such a way that it encapsulates the details behind this relationship? And how can we do it without painstaking manual work and trying to somehow indicate semantic relationships and meaning in the words?

Word2Vec relies on neural networks and trains on a large, unlabeled piece of text in a technique known as " unsupervised" learning.

Contrary to the last neural network I discussed which was a " supervised" exercise (e.g. for every input record we had the expected output/answer), Word2Vec uses a completely "unsupervised" approach - in other words, the neural network simply takes a massive block of text with no markup or labels (broken into sentences or lines usually) and then uses that to train itself.

This kind of unsupervised learning can seem a little unbelievable at first, getting your head around the idea that a network could train itself without even knowing the "answers" seemed a little strange to me first time I heard the concept, especially as a fundamental requirement for an NN to converge on optimum solution requires a " cost-function" (e.g. some thing we can use after each feed-forward step to tell us how right we are, and if our NN is heading in the right direction).

But really, if we think back to the literal biological comparison with the brain, as people we learn through this unsupervised approach all the time - it's basically trial-and-error.

Imagine a toddler attempting to learn to use a smartphone or tablet: they likely don't get shown explicitly to press an icon, or to swipe to unlock, but they might try combinations of power buttons, volume controls and swiping and seeing what happens (and if it does what they are ultimately trying to do), and they get feedback from the device - not direct feedback about what the correct gesture is, or how wrong they were, just the feedback that it doesn't do what they want - and if you have ever lived with a toddler who has got to grips with touchscreens, you may have noticed that when they then experience a TV or laptop, they instinctively attempt to touch or swipe the things on the screen that they want (in NN terms this would be known as "overfitting" - they have trained on too specific a set of data, so are poor at generalising - luckily, the introduction of a non-touch screen such as a TV expands their training set and they continue to improve their NN, getting better at generalising!)

So, this is basically how Word2Vec works. Which is pretty amazing if you think about it (well, I think its neat).

So how does this apply to Word2Vec? Well just like a smartphone gives implicit, in-direct feedback to a toddler, so the input data can provide feedback to itself. There are broadly two techniques when training the network:

So, our NN has a large body of text broken up into sentences/lines - and just like in our last NN example, we take the first row from the training set, but we don't just take the whole sentence to push into the NN (after all, the sentence will be variable length, which would confuse our input neurons), instead we take a set number of words - referred to as the " window size", let's say 5, and feed those into the network. In this approach, the goal is for the NN to try and correctly guess the middle word in that window - that is, given a phrase of 5 words, the NN attempts to guess the word at position 3.

So it's unsupervised learning, as we haven't had to go through any data and label things, or do any additional pre-processing - we can simply feed in any large body of text and it can just try to guess the words given their context.

The Skip-gram approach is similar, but the inverse - that is, given the word at position n, it attempts to guess the words at position n-2, n-1, n+1, n+2.

The network is trying to work out which word(s) are missing and just looks to the data itself to see if it can guess it correctly.

So one popular deep-learning & word2vec implementation on the JVM is DeepLearning4J. It is pretty simple to use to get used to what is going on and is pretty well documented (along with some good high-level overviews of some core topics). You can get up and running playing with the library and some example datasets pretty quickly following their guide. Their NN setup is also equally simple and worth playing with, their MNIST hello-world tutorial lets you get up and running with that dataset pretty quickly.

A little while ago, I wrote a web crawler for the BBC food recipe archive, so I happened to have several thousand recipes sitting around and thought it might be fun to feed those recipes into Word2Vec to see if it could give any interesting results or if it was any good at recommending food pairings based on the semantic features the Word2Vec NN extracts from the data.

The first thing I tried was just using the ingredient list as a sentence - hoping that it would be better for extracting the relationship between ingredients, with each complete list of ingredients being input as a sentence.  My hope was that if I queried the trained model for X is to Beef, as Rosemary is to Lamb, I would start to get some interesting results - or at least be able to enter an ingredient and get similar ingredients to help identify possible substitutions.

As you can see, it has managed to extract some meaning from the data - for both pork and lamb, the nearest words do seem to be related to the target word, but not so much that could really be useful. Although this in itself is pretty exciting - it has taken an un-labelled body of text and has been able to learn some pretty accurate relationships between words.

Actually, on reflection, a list of ingredients isn't actually that great an input, as it isn't a natural structure and there is no natural ordering of the words - a lot of meaning is captured in the phrases rather than just lists of words.

So next up, I used the instructions for the recipes - each step in the recipe became a sentence for input, and minimal cleanup was needed, however, with some basic tweaking (it's fairly possible that if I played more with the Word2Vec configuration I could have got some improved results) the results weren't really that much better, and for the same lamb & pork search this was the output:

Again, its still impressive to see that some meaning has been found from these words, is it better than raw ingredient list? I think not - the pork one seems wrong, as it seems to have very much aligned pork as a poultry (although maybe that is some meaningful insight that conventional wisdom just hasn't taught us yet!?) 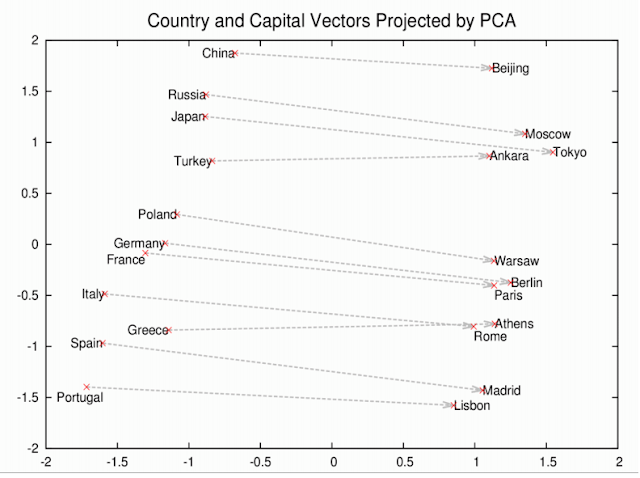 So could we extract similar relationships between food stuffs?  The short answer, with the models trained so far, was kind of..

Word2Vec supports the idea of positive and negative matches when looking for nearest words - that allows you to find these kind of relationships. So what we are looking for is something like "X is to Lamb, as thigh is to chicken" (e.g. hopefully this should find a part of the lamb), and hopefully use this to extract further information about ingredient relationships that could be useful in thinking about food.

So, I ran that arithmetic against my two models.

The instructions based model returned the following output:

Which is a pretty good effort - I think if I had to name a lamb equivalent of chicken thigh, a lamb shank is probably what I would have gone for (top of the leg, both pieces of slow twitch muscle and both the more game-y, flavourful pieces of the animal - I will stop as we are getting into food-nerd territory).

I also ran the same query on the ingredients based set (which remember, ran better on the basic nearest words test):

Which interestingly, doesn't seem as good. It has the shin, which isn't too bad in as far as its the leg of the animals, but not quite as good a match as the previous.

Once you have the input data, Word2Vec is super easy to get up and running. As always, the code is on GitHub if you want to see the build stuff (I did have to fudge some dependencies and exclude some stuff to get it running on Ubuntu - you may get errors relating to javacpp or jnind4j not available - but the build file has the required work arounds in to get that running), but the interesting abit is as follows:
If we run through what we are setting up here:

And that's all you need to really get your first Word2Vec model up and running! So find some interesting data, load it in and start seeing what interesting stuff you can find.

So go have fun - try and find some interesting data sets of text stuff you can feed in and what you can work out about the relationships - and feel free to comment here with anything interesting you find.