Usability testing in a real-world environment (production environment) gives us insight into how users actually use our product in their day-to-day lives. It is one thing to run a test in a lab setting, but it is another to have users try features while they are walking, running to the airport, stressed, and sleepy.

No matter how hard we try, it is very difficult to truly simulate how our apps behave in our production environment. We can run focus groups, run beta tests in a beta environment, and test things internally, but how can we truly mimic the real world in an artificial context? In other words, how do we test a feature while also simulating the environment it’s meant to be used in?

A good real-world usability test analyzes features efficiently and accurately collects user feedback to improve the user experience. However, when we test anything in a non-production environment, we are inherently biasing our tests. In a lab-based usability test:

Does this mean that running usability tests in non-production environments is a waste of time? Not at all! This is absolutely necessary to identify bugs, check for general usability, and solicit feedback quickly.

Benefits of Usability Testing in Production

The primary purpose of usability testing in production is to assess real-world user behavior while minimizing bias and performance risk. Some more benefits include:

You receive quantitative insight into your feature’s performance. How well is it scaling? Are users using it? How is it impacting your system? How are your levels of engagement?

You receive qualitative feedback. Are users complaining? Are they happy? Are they neutral? Are they submitting support tickets? Are they leaving?

Users test the feature without knowing that they are part of the test. You can assess how well they use it by using a product like Full Story to record the session or by tracking metrics. Therefore, you get a more representative sample testing the feature rather than just early adopters.

There is nothing quite like your production environment, where you can have a complex array of nodes, clusters, CDNs, etc. allowing your app to scale. As people start to use the new feature, you can see how it is impacting your actual system (load times, discoverability, caching issues, etc.).

Managing a Usability Test in Production

Of course, testing anything in your production environment is inherently risky and has real-world consequences. If you launch something to everyone just to get feedback and they hate it, then you risk permanently losing those users. Equally bad, you can cripple your entire application with unforeseen scaling and performance issues.

To mitigate this, companies like Facebook, Amazon, and Google collect production feedback by releasing features behind feature flags. While we won’t go into to the specific anatomy of a feature flag, we can go through the methodology behind the release. 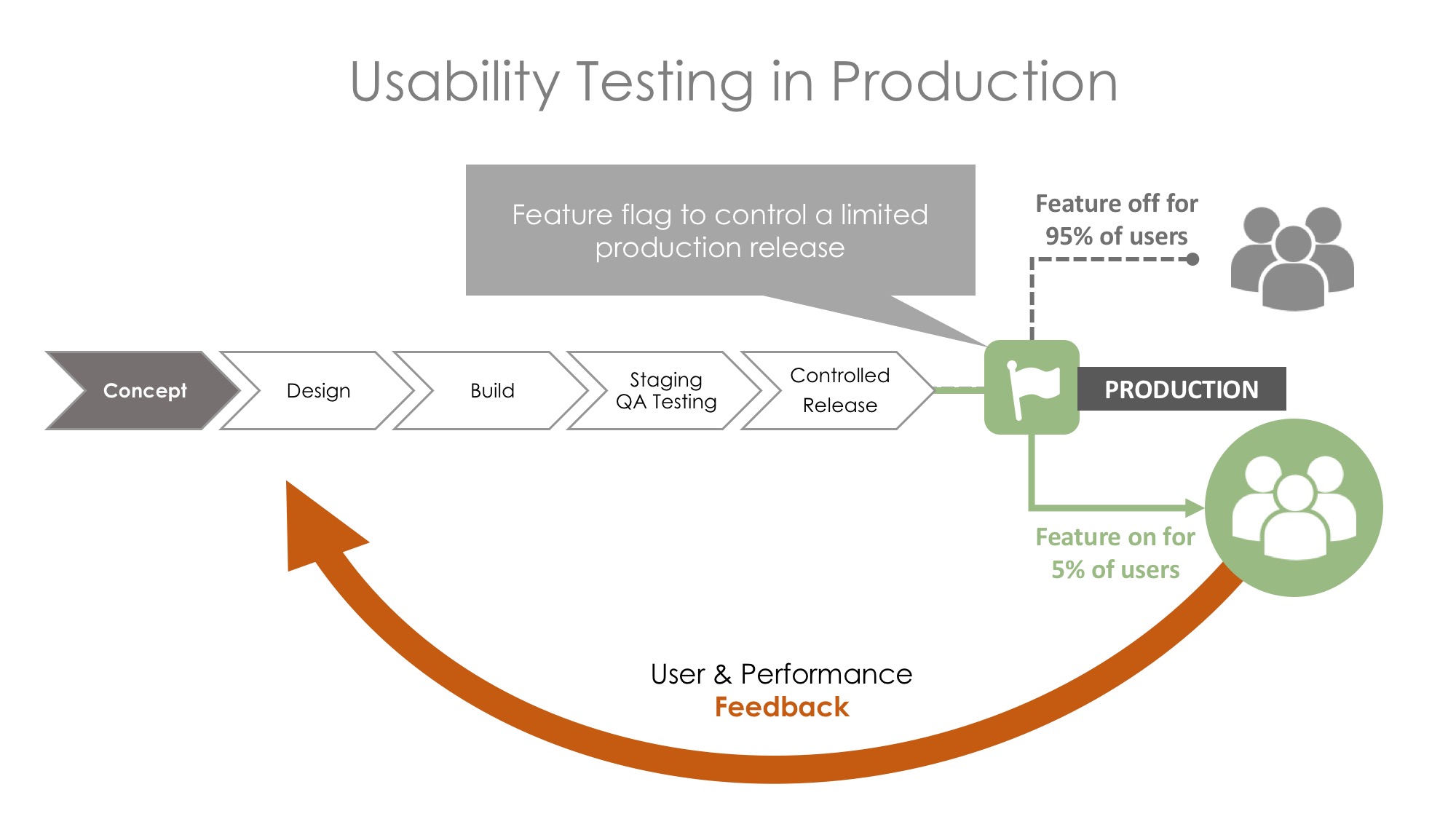 If a feature is wrapped in a feature flag, then it gives you control over who sees the feature and when. This means that you can perform targeted and controlled releases using a percentage rollout whereby you can incrementally increase a feature’s visibility to 1%, 5%, and to 100% of your users.

Hence, you can collect production level feedback because you control the level of risk. If a new feature is performing well, then you can keep increasing the percentage rollout. If it is tanking or hurting performance, then you can reduce the rollout or kill it completely.

Therefore, feature flags (also known as feature toggles or config switches) give you full control over the risk of your production releases. You can gather real-world user feedback by separating your feature rollout from your code deployment.