Join For Free
When I was young The Wall was either an album by Pink Floyd... 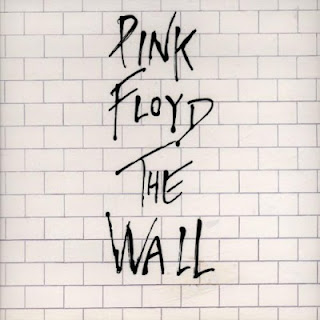 or a monstrous construction around East Berlin... 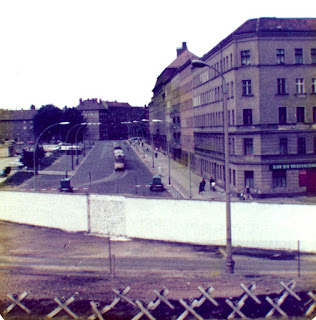 ...but more recently it became a very simple, but useful development tool.

Those of you who read this blog regularly will know that I’ve recently been developing a iOS application. That application, for the new Bentley GT V8, which is a really cool car, is now available from iTunes; however, like all applications, it wasn’t without its challenges and one of those was initially trying to impress on people that the work involved in implementing the 54 page requirement document that landed on my desk was pretty significant. Now, I could have used one of the common techniques for measuring the size of a project, like function point analysis, and use-cases and scenarios, but function point analysis is just a bunch of numbers and use-cases and scenarios is just a pile of Word documents all of which can easily be ignored. In this instance I needed a way of demonstrating the size of the app to very busy non-technical people.

I also needed a good way of capturing an overview of an application that the whole team could refer to, and my first thought was to just draw it out on a whiteboard. The problem with that was that we’d just moved into a new office and the whiteboards hadn’t yet arrived so, thinking laterally I decided to cut out all the different screens and stick them to the wall with accompanying notes, arrows and anything else that seemed to fit. 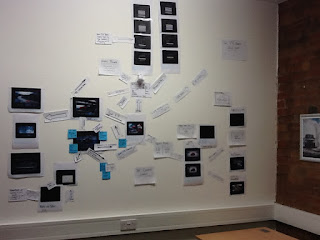 The photo above shows the overall structure of the application highlighting the flow from screen to screen. Using this technique, you can prominently display:


It turned out to be a very simple and useful method for creating an accessible overview of the application, plus doing some cutting, sticking and gluing, just like when you were in school, was very therapeutic.

Does it scale to cope with larger project? That depends upon the size of your wall... but it’s something that I’d definitely recommend and would use again. 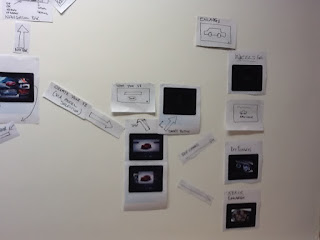 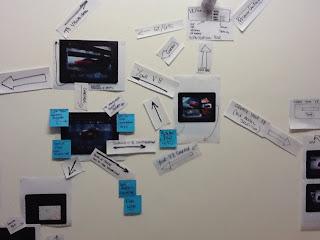