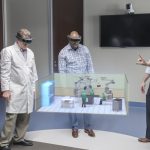 i’ve written previously about the fascinating applications of virtual reality in surgical settings, with startups such as echopixel not only allowing surgeons to practice on realistic, virtual organs, but also to use 3d printing to replicate the organs in real-life.

further evidence of the progress made in the field comes via the news that microsoft hololens have partnered with medical technology company stryker to better apply vr in operating theaters.

whereas previous examples of vr/ar in surgery have revolved around the organ itself, the latest example with stryker focuses on the room the operation will be conducted in.  depending on the surgical procedure required, a great deal of work is required to reorganize the room so that it’s suitable for the operation.  different tools, equipment, lighting and even patient orientation are required.

traditionally this would be undertaken after a meeting between the heads of each surgical discipline, and the discussions will be done in a very two dimensional way.  stryker aims to improve that by allowing staff to see 3d representations of the room and move its features around virtually.

“using hololens and stryker’s new by design solution, hospital stakeholders are now able to envision the ideal operating room configuration with the power of holograms and the benefit of mixed reality,” the team say.

check out the video below to see how stryker may be used to help staff design operating rooms efficiently and effectively.

an idea whose time has come?

there is certainly considerable interest in vr and ar recently as it attempts to move beyond a number of false starts to enter the mainstream.  i wrote recently about the new augmentor lab in the uk, and the launch of that facility highlighted the range of applications entering the market, from town planning to virtual sports attendance.

samsung’s in-house incubator is also going all in on vr and ar applications, with the c-lab showcasing four fascinating applications at the recent mobile world congress.

they included an app to help the visually impaired read and watch television, an app to allow us to see how furniture might look in our home before we buy it, and an app that lets users experience a trip in vr before embarking upon it.

some interesting, if still rather niche and experimental ideas there.  whether it’s enough to help vr cross the chasm and become mainstream remains to be seen.