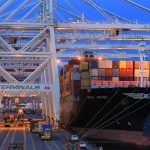 the last year has seen a number of interesting projects emerge to use machine learning to process and interrogate medical images for abnormalities such as tumors.  the notion is that machines can do such tasks both faster and more accurately than humans can.

it’s a fascinating topic, but researchers at university college london (ucl) show that the approach is not confined to medical imaging.  they have worked with the shipping industry to try and speed up the process by which containers are checked as they flow through ports.

as with medical imaging, each container is currently scanned by an x-ray machine, with that image then checked by humans for suspicious items.  it’s estimated that each container takes around ten minutes to check by a human, but the automated approach developed by ucl can do it in just 3.5 seconds.

the algorithm was trained on a few hundred thousand scans generated by a company called rapiscan, with the process documented in a recently published paper by the team.

when the algorithm was put through its paces, it managed to spot 90% of the items that were hidden in the images, with just 6/100 false positives given by the system, with a bit of fine tuning reducing this to 1/100.

the next step is to test the system out in a live environment, and with all going well, implement the software in the next generation of rapiscan devices.

of course, this isn’t the only solution to take this approach.  i wrote at the end of last year about a service that was looking to automate the security process in airports.

a startup called evolv technology are undertaking tests of a new body scanner that is powered by ai.  the scanner will allow people to simply walk through particular checkpoints in the airport, and their persons will be scanned automatically.  no more emptying of pockets or removing belts.

you also have teams developing facial recognition technology to automatically reference our faces against security databases.

the technology detects when we enter the airport, and then tracks us through the airport until we’re at the arrivals hall at our destination.

“when a lot of people gather in one place, queues develop quickly,” the researchers say. “rather than stop every single person at an airport gate, we’ve developed algorithms that recognize people’s faces, based on electronic passports with a photo and id number.”

they’re some nice examples of how machine learning can make our lives that bit more efficient.